In the grand scheme of things, while we all make an impact in the lives of the men and women we come across during our time here, very few of us ever truly help change the world. And the last person anyone would imagine being a true cultural touchstone would be a film critic. However, there has never been, and likely will never be, a film critic quite like one Roger Ebert.

Now, while anyone who knows about this website was likely an avid reader of Ebert’s musings on cinema, and have also likely had their lives touched by Ebert’s bewilderingly insightful take on life and everything that comes with it. However, for those who may only know him as one half of the duo who made thumbs and their pointing direction a valid way to rate a film, one of the year’s greatest and truly enjoyable is about to change that.

With Steve James at the helm, Ebert’s brilliant memoir Life Itself has become a documentary attempting to similarly get at the core of Ebert’s life and work. Taking its name from the book, the film tells the journey of Roger Ebert from his days as a youngster in Illinois all the way to his groundbreaking work as the long time film critic at the Chicago Sun-Times, his iconic stint as one half of the TV critic team Siskel and Ebert, and his health battles near the end of his life. Getting interviews from people ranging from former Sun-Times co-workers to family members all the way to filmmakers like Werner Herzog, the film incorporates archival footage, talking head interviews, and the written work of Ebert to tell a breathless story of a man who would transcend the world of written film criticism to not only become arguably the most influential film critic of our time, but one of this era’s most influential social commentators.

Much like Ebert’s writing, this film is deeply personal. Not only a deeply personal film with regards to the man at the center of the story here, but also everyone he’s touched throughout his life. With Ebert featured in various segments, much of the story is told either through first hand accounts by those who lived his life with him, or through his writing via the aforementioned memoir. Be it his rather troublesome relationship with right hand man and partner in crime Gene Siskel or his life-affirming relationship with his beautiful and bewilderingly strong wife Chaz Ebert, the film digs rather deep into the writer’s life, and in that comes the film’s greatest strength.

This is in no way a purely loving look at the man, the myth and the legend. Described during the film as a raconteur, he may be known as the bombastic and insightful critic synonymous with the job, but as the film goes on to describe, he lived more than a full life. Hinting and full on discussing Ebert’s battle with alcohol and his early fights with Siskel, a man who he would go on to care immensely about, the film looks at, as well, the critical response to Ebert and Siskel’s rise to fame which is arguably the picture’s most informative segment. Any person reading this review likely knows much about Ebert’s work as a writer in and out of the film world, and his relationships with names like Scorsese and Herzog, but these intimate moments in Ebert’s life are what make this film an absolute wonder.

As an avid reader (read: superfan) of Ebert’s work, I’ll end with saying that this isn’t a film. For some it will be an introduction, a perfect stepping stone, into a world of film criticism and social commentary that is so deft and almost poetic that it will change the way you see film, and hopefully, the world. For some it will be an introduction into a man that has only been seen in their lives as a name you’d call your friend who dug a little too deep into a film you just watched. However, for those who have read his work and have a similar passion for not only film, but life, as Ebert did, this is a personal and deeply moving meditation on the life of a man, in all his great moments, and the worst. Impossibly affecting and emotionally raw from the opening credits, Steve James has crafted yet another masterpiece. And yet, it doesn’t feel like a film. It’s not a manipulative love letter either. It’s something more. Something greater. Something more real. It’s the life of a man as he lived it. No artifice. Just a personal piece of art. And it’s a masterpiece to boot. 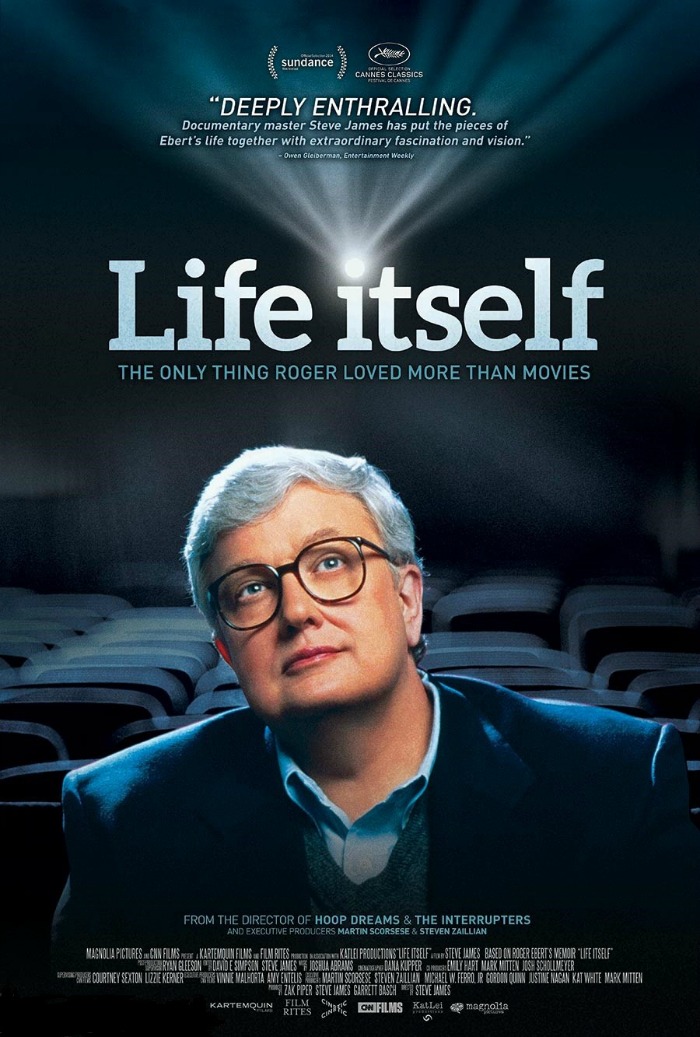