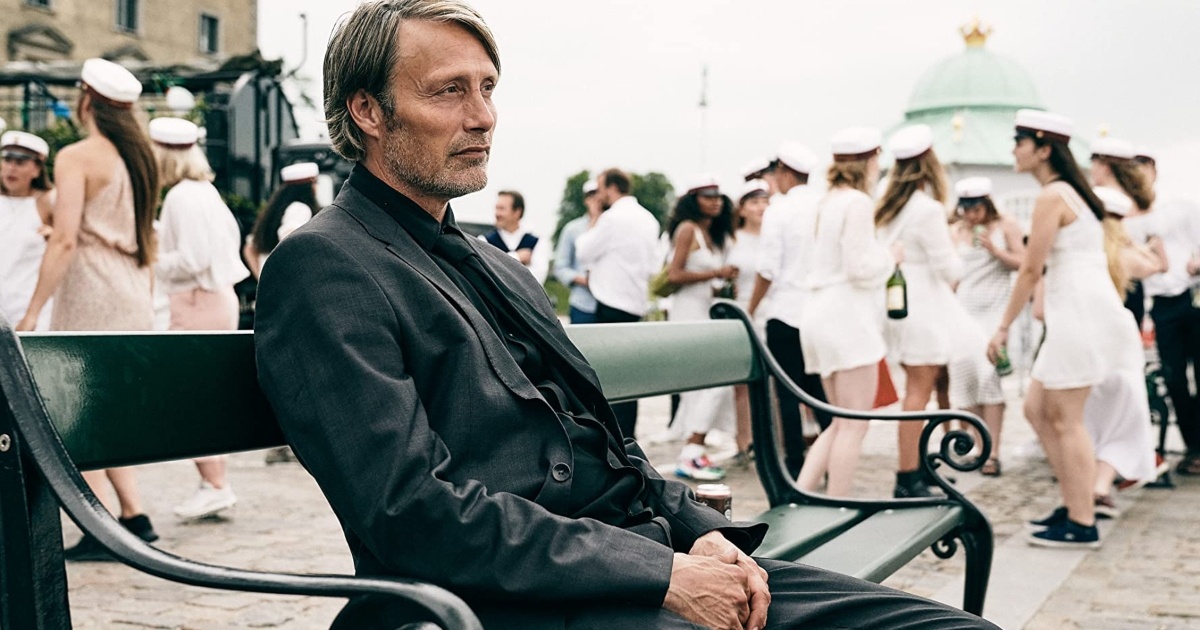 To most people, the Norwegian psychologist Finn Skarderud probably doesn’t hold much space in the mind. However, for anyone with a passing fancy for the devil’s water, his theory of man being born with a .5 blood alcohol level and that routine consumption of alcohol opens the mind stands as something of a curiosity.

And he’s also on the mind of director Thomas Vinterberg, and his latest film Another Round.

Starring Mads Mikkelsen, the film follows Mikkelsen’s Martin, one of four friendly high school teachers caught in passion-less lives, who teams with his contemporaries to put into action this theory. The quartet embarks on a journey that sees them experiment with their alcohol levels, to see if constant consumption will embed their lives with some semblance of meaning, or, maybe even happiness. However, what begins as a friendly, “boys being boys”-style experiment quickly and decidedly devolves into a blackly comic rumination on booze and the manners with which we as humans interact with it.

Shockingly textured and nuanced given its premise, Another Round could have easily spun itself into something of a Hangover-like comedy of debauchery, where the use of wildly unhealthy amounts of alcohol would be played as little more than a bullet point in a larger, more broad and insufferably grotesque “comedy.” Instead, Vinterberg’s script (co-penned with oft-collaborator Tobias Lindholm), is a thrillingly incisive one, not stepping away from the occasional bursts of humor one encounters when drinking with friends, but instead pairing that with the moments before and after the friendly boozing.

These are the moments where the film truly comes to life, showing how these men, particularly Martin, use booze as not just a vessel for expression, but as a vessel to escape lives they perceive to have little-to-no real meaning. These are deeply unhappy men with dreams and aspirations that have seemingly been left behind for mundane jobs working at a local secondary school. As the experiments progress, the men step closer and closer to a proverbial line of no return, and with a sharply penned screenplay Vinterberg is able to give a personal and intimate look into the role alcohol has on a person’s life and why we return again and again to booze for some sort of escape, as fleeting as it may be.

Mikkelsen steps in here as lead, and gives another stellar performance. Maybe one of the actor’s most human and humane performances, Mikkelsen’s Martin is clearly a smart and passionate person, simply caught in some strange rut. However, as he progresses through this wild experiment, things progress in ways previously unforeseen. Never bleak by any means, the film’s power comes in its shades of grey, finding Martin to be a perfect vessel for larger ideas about our relationship with liquor, both positive and negative. One of the film’s smarter sequences, and maybe Mikkelsen’s most charming moment, finds him asking his class to choose the politician they’d vote for. After describing two boozehounds, he gives the class a rather inoffensive third choice, subsequently leading them all to vote for that person. However, what they didn’t know is that while choices A and B, FDR and Winston Churchill, did in fact love their booze and women, the teetotaling third choice was none other than Hitler. This gets a laugh from both the class and the viewer, yet what makes the sequence so smart is its perfect deconstruction of the larger themes at work here. That same looseness is seen throughout the film, even proto-musical scenes like one of the first drinking ventures our foursome go on, and helps envelope the viewer in an intimate and engrossing atmosphere, made manifest by Vinterberg’s stellar direction.

Culminating in one of the best final scenes in all of 2020, Another Round is simply one of the year’s best films, led by a damn-near career best lead performance. A must see, this picture is.