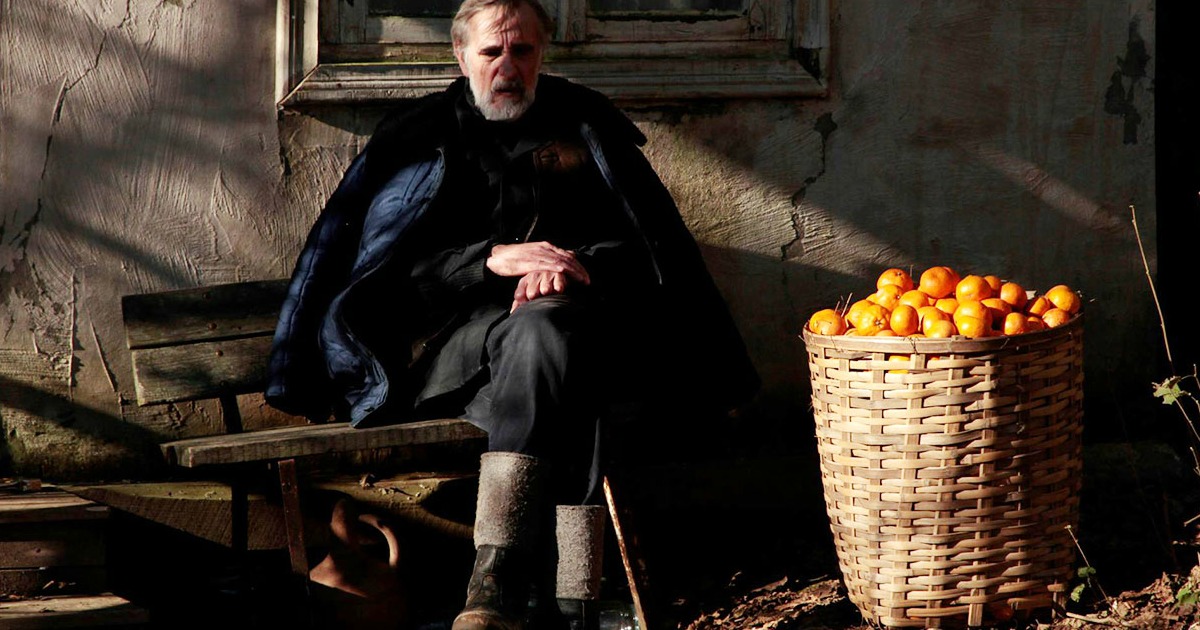 The battle for peace is not only a thing nations themselves fight for. Throughout cinema history, filmmakers have been infatuated with the idea of peace and the reasoning behind the idea of war. Be it in non-fiction cinema or in the case of Oscar nominee Tangerines, which is this weekend debuting in theaters in limited release, the world of fiction narrative storytelling, filmmakers throughout the world and throughout time, have taken to the big screen to yearn for peace and try and discover just what makes mankind prone to violence against one another.

Writer-director Zaza Urushadze is the latest to take to wartime to weave a story about human nature and human violence, with his new film using a specific setting to tell his story. Set in 1992 following the dissolution of the Soviet Union, the film introduces us to Ivo, an Estonian immigrant farmer who finds his latest tangerine harvest stuck in the Georgian civil war that enveloped the nation. Deciding to join a fellow farmer in staying in Georgia just until the harvest is finished, he is caught in the middle of a firefight, where both an Georgian mercenary and an Abkhazian separatist are caught in the crosshairs. Nursing both to health under the same roof, this intimate, briskly paced drama jumps from a seemingly neo-realist look at normalcy caught in wartime, and evolves into a philosophical meditation on the roots of violence and the senseless nature of war.

Sadly, the film ultimately gets lost in its own head, becoming something striving for urgency so strongly that it misses the mark, instead simply becoming forgettable.

Visually, the film is quite stellar. Urushadze’s camera is relatively static, even during the brief sequences with action, which is very fitting of the current world cinema model. Muted tableaus set the scene in a way that feels almost painterly, giving us a gorgeous look at the rural areas of Georgia, doing a great deal of the thematic heavy lifting. These haunting images become moving when we see the violence that ultimately splatters blood across the nation, giving the film a much needed sense of importance and intrigue. The interiors are well lit and the space feels both cluttered and well designed.

The film’s biggest star however is Lembit Ulfsak. Giving the only performance in the film truly worth any note, he stars here as Ivo, a Michael Haneke-looking farmer who is caught in the middle of battle here. It’s a beautifully toned performance that is ultimately undone by the film’s flawed final act, but is the closest thing the film has to a beating heart. Dryly comic and full of unflinching humanity, his performance devolves into philosophizing in the same nuance-free manner as the film itself in the last act, but what happens prior is some of the most richly humane acting we’ve seen in some time. The supporting cast here is solid but ultimately doesn’t exist for any reason other than to be manifested metaphors which works for a film this length, but will leave many mainstream viewers searching for a real connection to the work.

Ultimately, the film is philosophical manifesto in the form of a 90 minute fiction narrative. A moving, but forgettable, look at the nature of war and violence, the film features a superb lead performance that begs for a more palpable emotional core. Beautifully made and just the right type of film to catch on VOD, the film is one to keep an eye out for if it crops up on your digital outlet. It’s best saved for a home viewing.