The Boxtrolls, directed by Graham Annable and Anthony Stacchi , produced here in Portland, Oregon at the magical Laika studios, is my favorite film of 2014 (so far).

After leaving the press screening, with my three and a half year old daughter, I tweeted that the film was tied with Wes Anderson’s Grand Budapest Hotel for the top spot on my list. In the week or so since watching The Boxtrolls, it has only grown more fondly in my memory, and I am eagerly awaiting the opportunity to go see the film again with my wife and daughter this weekend.

As anyone who listens to our various podcasts here on the site knows, I’m a huge animation fan, and was thrilled earlier this year when the Criterion Collection added Wes Anderson’s Fantastic Mr. Fox to their line-up. The fact that Criterion chose a work of stop-motion to be the first animated film that they have released on DVD and Blu-ray (yes, I know, Akira was a Criterion release), shows how special this medium is. So much work has to go into a stop-motion animated film. This isn’t a matter of painting cells, or creating a world in a computer. Stop motion demands so much more from filmmakers. An attention to details, a love of the craft, and an amount of patience that seems unimaginable in this current world of six-second Vine clips (yes, I know there are some great pieces of stop-motion out there on Vine).

Despite having a deep love of animated films, I hadn’t seen Laika’s 2012 film, Paranorman, until this past week. I enjoyed Coraline on Blu-ray a couple of years back, but when The Boxtrolls was announced, I really had no immediate nor pressing desire to see Laika’s latest. It wasn’t until we stumbled upon the trailer on YouTube, while finding short videos to show our daughter that I realized that this film was going to be something special. And it is. If you haven’t seen the film yet, or any of the marketing materials, I’d suggest this piece from the opening of the film, to give you an idea of how what the film feels like.

The story of The Boxtrolls is inspired by Alan Snow’s book, Here Be Monsters, but from what I can tell, they’ve changed quite a bit. The town of Cheesebridge, led by Jared Harris’ Lord Portley-Rind (get it?), is plagued by the misunderstood Boxtrolls, who dig through the garbage of the town at night, and are blamed for many of the town’s problems, including the stealing of a baby. We quickly learn the fate of the baby, and follow him as he grows up with the Boxtrolls. The Boxtrolls are hunted by Ben Kingsley’s Archibald Snatcher, a “red hat” who desperately wants to join the elite group of “white hats” that run the town.

Like many of the great animated films from Studio Ghibli, Pixar, Disney, Cartoon Saloon, and others, Laika manages to take a familiar premise: a boy raised by animals (trolls, in this case), and twist it enough to make it feel fresh. They also pepper the dialogue with the right amount of humor for everyone to enjoy. They expertly compose and frame each scene. They pair the visuals with a gorgeous score by Dario Marianelli, and even feature a song written by Eric Idle.

It is certainly easy (I say that without really knowing how easy it is) to fill an animated film with celebrity voices and hope that by having their names on the posters people will flock to the theater on opening weekend. Over the years we’ve seen Pixar avoid stunt casting, and Laika has followed their example. Ben Kingsley, who voices the lead villain Archibald Snatcher, is almost unrecognizable in this role. The way he slurs and draws out certain sounds is terrifying and full of joy at the same time. Despite having watched the marketing video in which the various actors are shown voicing their characters, I had trouble recalling who was voicing which character during the film. I was reminded of my viewing of Despicable Me several years ago, when Russell Brand blew me away with his Dr. Nefario. I had no idea that he was behind the voice, and I had a whole new respect for him afterwards. Nick Frost, as Mr. Trout, and Richard Ayoade, as Mr. Pickles, stole the show for me. Their henchman characters, who see themselves as the heroes of the story, are hilarious and superbly written. I was laughing out loud every time they were given a moment to voice their concerns about their roles in the story.

The Boxtrolls are voiced by Dee Bradley Baker, Steve Blum, Nika Futterman, Pat Fraley, and Fred Tatasciore (and others, I’m sure), to great effect. The video below shows what went into the designing of the creatures’ language, and I think they pulled it off incredibly well. When creating characters like this, you run the risk of creating potentially offensive caricatures (see the Star Wars prequels), and they avoid it in The Boxtrolls.

The art direction is absolutely incredible. From the basic character designs to the architecture and costumes, everything is perfect. I gained a whole new respect for the work that goes into costume design while watching the supplements on the extended editions of The Lord Of The Rings. Watching this following clip with Deborah Cook raised that respect to a whole new level.

It’s hard not to look at this film as having been inspired by the films of Monty Python (and Terry Gilliam especially), but also having just recently been exposed to the animated shorts of Walerian Borowczyk (through Arrow Films’ recent Blu-ray release), it’s hard to not see his work in the DNA of The Boxtrolls. You’ll also find the work of Jean-Pierre Jeunet (The City Of Lost Children), Jim Henson, and Guillermo Del Toro sprinkled throughout the film. I’m sure there are many other, deeper influences to be mentioned here. The artists at Laika are clearly influenced by a multitude of sources, and they are to be celebrated in their ability to take all of that and create something that feels so fresh.

While we’re talking about the art direction, watch the following clip, in which the team discusses the building of the “Mecha Drill”. A stop-motion creation that will be difficult to top, in terms of complexity and execution.

While thinking about the themes of the film, it’s fun to wonder how this might get picked apart by various political groups, who see their interests attacked. There are issues of class, racism, and fear-mongering present in the film, but I never felt like it was bludgeoning me with its agenda. To take a small step back, and get a little meta, it’s so clear that this film was put together by a group of filmmakers in Portland: A group of mis-understood folks, living in squalor, repurposing the trash of the upper class, being chased by a villain with a severe food allergy! While this film might take place in a vague, 19th century time and place, it’s so clearly a film made in 2014.

As a parent of a three year old daughter, I often feel conflicted about showing her too much television, too many movies. We’ve been very careful about what we let her watch, and how little screen time she gets per day. The Boxtrolls might not be directed at her age group. There are some scary moments in the film that I was worried might stick with her, and over shadow the joyous bits. This was not the case. In the week since seeing the film, we’ve picked up every book available to us in connection with The Boxtrolls, drawn a dozen portraits of the trolls, built her own box to wear, and talked on and on about seeing the film again. She loves it. I’m so happy that she has this film, a film of real quality, as a piece of art that she can grow with and look back on fondly.

This is a film that I’m sure we’ll see in the theaters several times, and will have a welcome home on our Blu-ray shelves when it arrives on home video.

The Boxtrolls is now playing theatrically in the United States, find your local theaters and showtimes here. 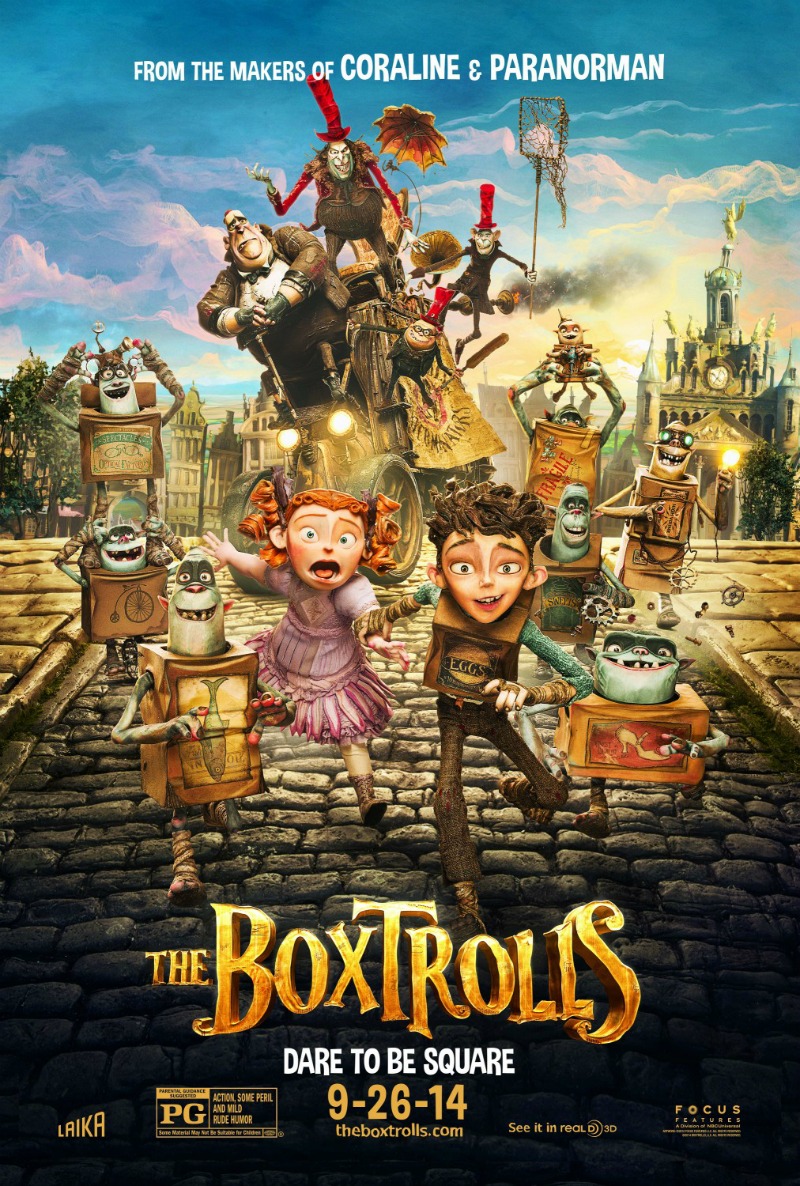