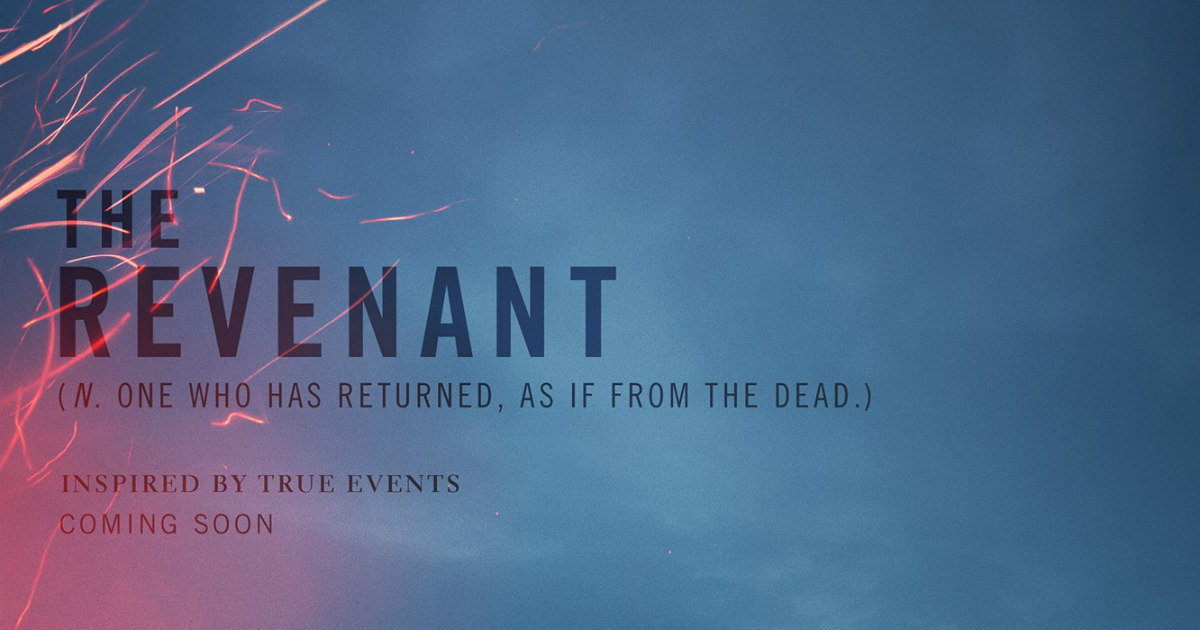 As is the case with, I’m sure, many of you, there are a few current opinions I do not share with my teenage self, at least not as passionately. Seventeen-year-old Scott loved Fight Club. Loved it. Thought it was the greatest movie ever made. Now, I still like Fight Club, but I’ve also seen thousands of other movies in the twelve years that have passed, and I know they get so, so much better than Fight Club. Much as I can still see in that film what so enthralled me at that age, I occasionally see a new film that has little to offer me at this stage in life, but which would have been utterly essential and world-changing if I’d seen it as a teenager. The Revenant is such a film.

Freely in discourse with everything from Terrence Malick to first-person shooter games, Alejandro G. Iñárritu’s latest film is a fine gateway drug for a younger audience hungry for something a little deeper than the entertainment to which they’re usually accustomed. Adult audiences may suffer as I did, searching in vain for anything of substance to grab hold of in this tediously straightforward revenge narrative whose central conclusion is more or less, “yeah it feels good to kill some bastards…but then what?” Leonardo DiCaprio stars as Hugh Glass, an explorer making his living as a guide for an expedition through then-uncharted American wilderness. It’s 1823, and tough terrain. Every inch of land is covered in snow, temperatures are miserable, food is scarce, and Native American tribes are fighting back against this increasing encroachment. Glass, who lived with a tribe for a time and fathered a son by one of the women there (a son who now travels with him, and is not well-liked by his fellow travelers), is sympathetic to the struggle, but also doesn’t want to, you know, die or anything.

Nature has other plans, and one day while scouting alone (the buddy system is apparently a 20th century construct), he gets absolutely mauled by a bear. Now, by this point in the film, I already had some doubts. Iñárritu and director of photography Emmanuel Lubezki’s approach to the story is built around long takes, designed to convey a sort of you-are-there horror to the violence and impossibility of living, but are so elaborately orchestrated as to automatically devalue any possibility of verisimilitude. In the press leading up to the film’s release, Iñárritu spoke of how the cast and crew more or less lived in the wild, because he never wanted to the audience to feel like they were watching actors in a movie. Every shot in the movie runs completely contrary to this notion. Whereas Lubezki’s work with Malick (on The New World, The Tree of Life, and To the Wonder) was designed to encourage improvisation and discovery, Iñárritu’s choreography demands actors stay within carefully-constructed limits so that every element times out perfectly. He’s taming the wilderness, making it controllable and predictable. It’s often quite impressive – especially on a big screen with booming sound, the effect is tremendously thrilling – but it’s bereft of narrative, thematic, or emotional resonance.

And then we get to the bear attack, which employs this same aesthetic and adds a ridiculous computer effect in the middle. In it, we watch, within a wide shot, and all in a single take, a bear rush at Hugh, tackle him, and gradually gnaw away at his face, neck, back, stomach, and legs. The whole process takes a few minutes, as the bear takes a breather from time to time before going back at it. But it’s not like Iñárritu is going to let a real bear have its way with one of the biggest movie stars in the world for hours of shooting time, so the bear is computer generated. CGI is an incredible tool that has opened up countless narrative and artistic possibilities over the past two decades, but when the purpose of your film is convey gritty, harsh reality, a giant CGI bear is ridiculous, and even more so when placed into a wide shot that allows us to observe for minutes on end just how terrible it looks. It becomes impossible to take Hugh’s plight or physical struggle seriously when his enemy has no weight, depth, or presence.

DiCaprio brings his characteristic level of commitment, building a character who at heart has found a certain sense of calm, now driven to desperation. He meets each crisis with resolve to move forward. Every problem must have a solution, no matter how unpalatable. Iñárritu (who cowrote the screenplay with Mark L. Smith, based on the novel by Michael Punke, itself based on a true story) certainly isn’t shy about loading DiCaprio up with challenges, and, in broad strokes, the video game feel of the cinematography is supported by the gamey feel of the narrative. Much as a video game set in the old west or the 1920s mafia would pack in every archetype of their respective genre, it feels at times like Iñárritu is too worried we’ll become bored by simply watching a man survive and be forced to reckon with himself and his environment, so let’s be sure to throw in a horse falling off a cliff for good measure. As with most things, DiCaprio carries the scene well, but its essential silliness is hard to overcome.

Not helping this silliness is Tom Hardy, playing the film’s eventual (and heavily foreshadowed) villain, who is improbably given the task of safeguarding Hugh while the others forge on ahead, despite the fact that he a) is a criminal, and b) has repeatedly stated that Hugh should probably just die even before the bear did most of the work for him. Good thinking, expedition. Anyway, Hardy’s lack of restraint has alternately been effectively unleashed (Bronson, Warrior), carefully honed (Locke, The Drop, Inception), or just flat-out left to go wild, no matter how poorly it fits the overall film (The Dark Knight Rises, Legend). This falls somewhere between all three, wildly inappropriate and overdetermined at basically every level, but then again, that’s the movie he’s in. There isn’t a single scene in which his motivation is in question; we’re given no sense of internal contradiction or struggle. He’s just a crazy guy. He does provide easily the film’s most captivating moment, when he’s telling a terribly portentous story by a fire and the camera (which is some new fancy digital system) is able to pick up on such detail that you can see his eyes dilate in and out as the flame flickers within them. In an overblown movie, a moment of honesty goes a long way.

Despite my many reservations and overall malaise even while watching the film, I would again encourage teenagers to check this one out. Yes, it’s rated R, but I’m sure you have your ways (my way was convincing my parents to come along, because I’m responsible). If I saw this when I was 15 or 16, it would have meant the world to me and been integral to discovering how much more movies could do than I ever expected. That our taste evolves in no way devalues the importance of finding these stepping stones. I don’t begrudge those in such a position their love of these movies (maybe check out The Thin Red Line next); I do wonder how an awards body could ever take it seriously.

Written By
Scott Nye
More from Scott Nye
The often-derided film is a good deal more subversive and thoughtful than...
Read More