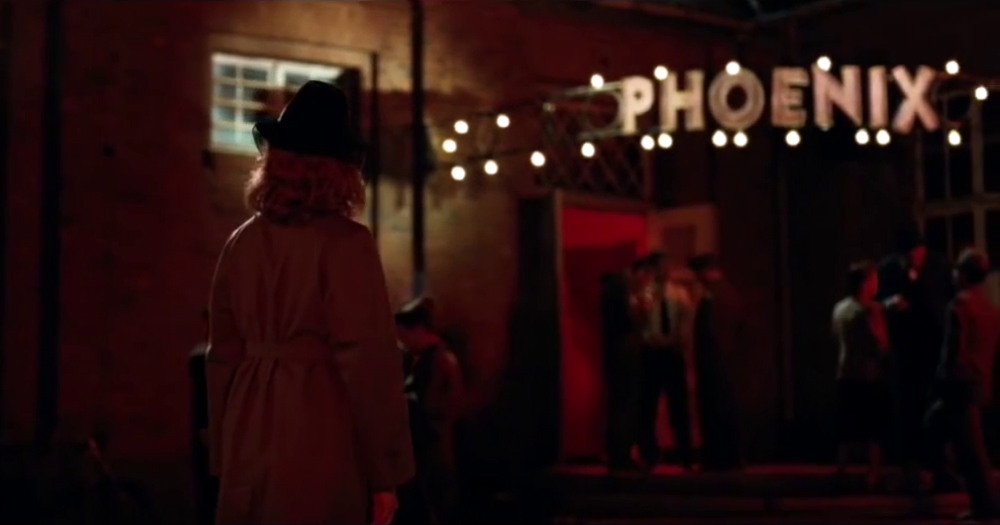 There it calls to her, a burning red beacon of life in the wasteland that was once Berlin. It’s a nightclub, but, as its name suggests, perhaps quite a lot more. Nelly (Nina Hoss) hopes her husband is working within; perhaps she hopes he’s not. Her close friend has already warned her to avoid him, but she’s been through too much trauma to extinguish her faith in the familiar. Left for dead at a concentration camp, her face was scarred beyond recognition. Her reconstructive surgery was not wholly successful; glancing her appearance in a broken mirror, she withdraws in shock. So much of the film hinges on how Hoss reacts, or doesn’t react, and this reflected glance sets up the stakes of the film – who is she now, and does her past have any bearing on her future?

These immediate postwar years, historically, centered around grief and rebuilding. Christian Petzold’s latest film, Phoenix, follows suit. With her entire extended family murdered, Nelly has inherited a good deal of money, enough not just to cover her extended hospital stay, but also to truly make a difference. Lene (Nina Kunzendorf) insists she travel to Palestine and help found a Jewish state, where they and their people can live safely and prosper. But Nelly isn’t ready to leave yet. The memory of her husband kept her going when all else was lost, and he must be found. But Johnny (Ronald Zehrfeld) too does not recognize her as anything more that a lookalike. He knows of his wife’s inheritance, and, believing her dead, that this stranger, so similar in appearance, can withdraw it for him. She plays along; maybe Lene is right, maybe he did betray her when she needed him most. Maybe he’ll reveal more to this stranger than he would to her. She makes feeble attempts to give herself away, never fully admitting the investigation.

Their interactions evolve rapidly, though Petzold never heightens the drama much above casually combative. Johnny believes their relationship to be only a brief one for mutual benefit (he has agreed to give her half of the reward); Nelly may, too, only be in it for a couple of weeks before shipping off to the Middle East. Our knowledge of the violence that effort will instigate hangs over its every mention. They escape the horrors of war only to dive into another. The effort to rebuild, to create something positive out of a catastrophe, is a collective human desire. Sometimes, though, that means breaking with the past. Nelly will sometimes yell “Johnny!” (Hoss’s voice breaking slightly, on the verge of exasperation or joy), sure he’ll recognize her through it. He does not; willfully? He doesn’t even ask how she knows to call him Johnny, and looks away when he tells her to stop doing so. Perhaps he just doesn’t care enough for this stranger to give her such answers; perhaps he’s avoiding the guilt of what he did to his wife. Zehrfeld plays a steel trap, allowing no indication of his thoughts or feelings, an act so many men perform in marriage. But it seems unfamiliar to Nelly, who’s left to mourn the loss of what they had, and of the man he once was, or at least who she believed him to be.

The film is haunted, with both the past and the unreal present. Nelly wanders the empty hospital ward with her face covered in bandages, touching memories encased in photographs, images that leap with life in her dreams. Her hotel feels like the height of luxury; every surface seems to glow (though the manager is quick to note they’re infested with flies). That club pulses with the energy of sin and vice in a world that has little other refuge. “If he’s lucky,” a busker says to Nelly when she asks where she might find her piano-playing husband, “He’s playing at one of the clubs. If he’s not, he’s playing the accordion on a corner.” Her best bet for finding a bustling club is in the American sector of Berlin, a city that once rewarded her, then imprisoned her, then left her for dead, and now has no place for her. Phoenix exists in a sort of limbo, between war and peace, poverty and wealth, marriage and independence, nationalism and individuality.

Yes, this deceptively simple film could be merely the first act of a larger tragedy; that Petzold finds so much within its confines is half its miracle. Tension is drawn from all quarters, some of which go unrevealed until they are resolved. Each conversation plays with unacknowledged, yet assumed and accepted, power. A man Nelly mistakes for her husband gropes her in the street, yet she doesn’t cry out – does she assume, after years in one form of imprisonment or another, that no one will help her? Is she right? Is this just her nature, to accept the rules others (this man, her husband, her friend) lay before her, or did the war teach her that? This film – this short, brilliant, seductive film that never announces itself as a major work but unfolds in absolute mastery – is too much for one viewing. I have glanced but a part of it.

Phoenix comes to theaters in limited release this weekend. It will roll out in the coming weeks and months.