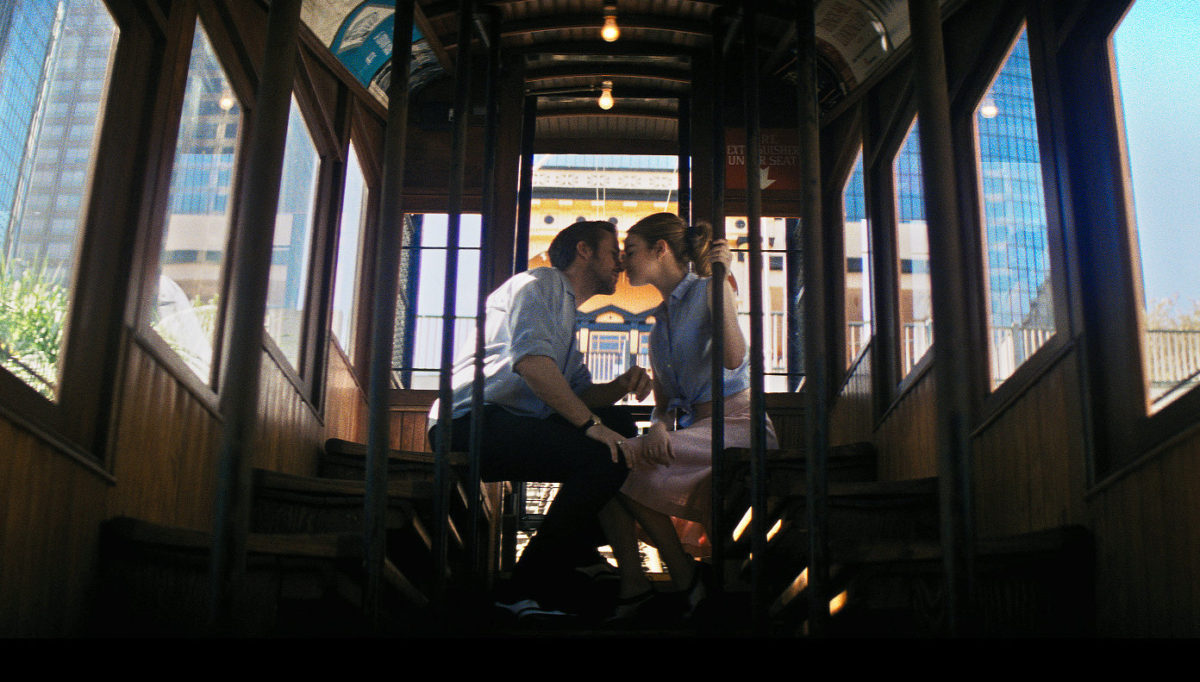 “There were a lot of people saying we were trying to make a really expensive museum piece,” La La Land producer Jordan Horowitz said of the long search to find funding for writer/director Damien Chazelle’s dream musical. Those people weren’t necessarily wrong. There is a shot from this film that literally, blatantly quotes from Rebel Without a Cause. The worship for old Hollywood, old music, old rhythms of life permeates every inch of the film. But it doesn’t matter whether or not La La Land is caught up in nostalgia. It matters whether Chazelle convinces his audience of the value of those objects of worship, and the drawbacks inherent to valuing them too much.

This makes La La Land sound a little thesis-y I suppose, which is not exactly incorrect. And there’s where Chazelle’s true artistic ancestry lies – not in Hollywood’s golden era, but in the French New Wave. Jean-Luc Godard and Jacques Demy were particularly keen on American genre films, and made films about people who, like them, tried to fashion their lives after them but ultimately found the endeavor unsatisfying. La La Land follows this model, marrying intellect and emotion. It recognizes the way we pattern ourselves on other people in an effort to craft a “brand” or “persona”, and is attuned to the exhilaration and dehumanization that comes with this process.

Mia (Emma Stone) is an actress trying to make it big in Los Angeles. Relying on her iPhone to alert her to forgotten auditions in the middle of her barista shift, she has very straightforward reads on basic character types (cops, firefighters, doctors, girlfriends), presumably hoping to find a guest spot on a TV drama. Her audition montage gives the first indication of the film’s postmodern sensibilities. Much of the humor comes from recognizing Stone playing an actress playing familiar material. If Mia’s arch readings were the genuine efforts of an ambitious young actress, we wouldn’t feel too bad about the quick dismissals she receives. We root for her because she’s Emma Stone. We know how talented she is. Everyone in the film just has to catch up.

Sebastian (Ryan Gosling) doesn’t need much time to catch up. She may be smitten with him first, stumbling into his improvised jazz show when he was supposed to be tinkling out Christmas carols at a mid-range restaurant, but he soon notices her, too. They fall into an easy rhythm almost effortlessly. Their initial courtship includes tap-dancing in the hills. Their first date sends them floating in the cosmos at the Griffith Observatory. It’s like something out of a movie.

Real life intervenes, as it must. Sebastian joins a band not to further his dream of owning a jazz club, or even to satisfy Mia’s desires for him, but to satisfy what he thinks she expects of him. Chazelle builds this gracefully, with Mia in one room on the phone with her mother, explaining the facts of she and Sebastian’s lives as he stares at a growing water stain on his ceiling. Chazelle initially wrote the film for a younger cast, and aged up Mia and Sebastian for Stone and Gosling. I’m not sure how drastic the change was, but the film benefits for it. So much of it depends on Sebastian’s seniority and his failure. We understand through quick expository dialogue with his sister (Rosemary DeWitt) that a business partner had ruined his prior shot at success. Now he’s in his mid-thirties, and still stalled out. And now he has a younger beautiful woman to impress. For as much as they might like to be a young hip bohemian couple, there’s still that water stain in the ceiling, gnawing away.

After a rousing, audacious opening number in a traffic jam, Justin Hurwitz’s songs settle into a more low-key tempo, rarely requiring Stone or Gosling to stretch their limited vocal ability. For those hungering for a more classical musical, this may be disappointing. Again, though, this isn’t MGM. This is about people reaching slightly beyond their abilities, it’s about the yearning for greatness within one’s limited capacity. This extends, too, to the dancing. Hardly elaborately choreographed, it’s nevertheless impeccably timed. Most the the musical numbers are executed in one shot (or a couple of extended shots), requiring the cast to hit precise marks in time with the music. While hardly exceptional to the musical genre across history, it’s still such a simple, beautiful way to communicate perfect harmony. Linus Sandgreen’s CinemaScope frame seems to dance with them, a third player in their union. On first view, I wondered if Chazelle and Sandgreen weren’t relying too heavily on the one-take gimmick, sacrificing the rhythm editing brings for an O.K. Go-style audacity. Seeing the film a second time, I found the rhythms of the camera movement much more pronounced, and admired Chazelle and choreographer Mandy Moore’s ability to hit those same beats. I only regret there wasn’t a musical number that explored Mia and Sebastian’s eventual dissolution as perfectly as these explored their joy.

Yes, La La Land is my most-treasured object of affection: the melancholy musical. Like Cover Girl, It’s Always Fair Weather, The Umbrellas of Cherbourg, it is attuned to the highs of romance, but also the way in which musicals are ideally equipped to express longing. In Mia and Sebastian’s tap dance number, they come together and move apart and challenge one another and flirt through their movement. In the finale, a gorgeous dreamscape that tours an alternate reality, we see everything they have failed to express to one another. We see how far their hopes exceeded their grasp. Audiences who suffered through Crazy, Stupid, Love know that Stone and Gosling are quite magnetic together, possessing an easy flirtation that gets you on their side immediately. They twist that connection into frustration and contempt without ever quite losing that playful edge. Their cutting jokes turn to genuine acrimony. Their wit is revealed to be as much defensive as it is charming.

The musical has been too absent from the screens in the modern era, and those few that get mounted are often erratic, unfocused stage adaptations. The notion of an original live-action musical, written for the screen, that doesn’t rely on pop songs is almost unheard of. No doubt I was starved for its presence, and no doubt I share Chazelle’s affection for their heyday. I also share his sadness that the dreams the movies sell cannot be real, and that we don’t always behave in accordance with our best interests or intentions. La La Land is a fantasy, a dream, something almost otherworldly. But Stone and Gosling bring it back down to earth, convincing us of the dream’s potential and acknowledging its defects. There are a lot of movies out there that provide escape, working overtime to convince us that this escape will fulfill us. Far fewer acknowledge the holes that movies cannot fill.

Written By
Scott Nye
More from Scott Nye
Leos Carax's lightning rod of a film is one of the year's...
Read More