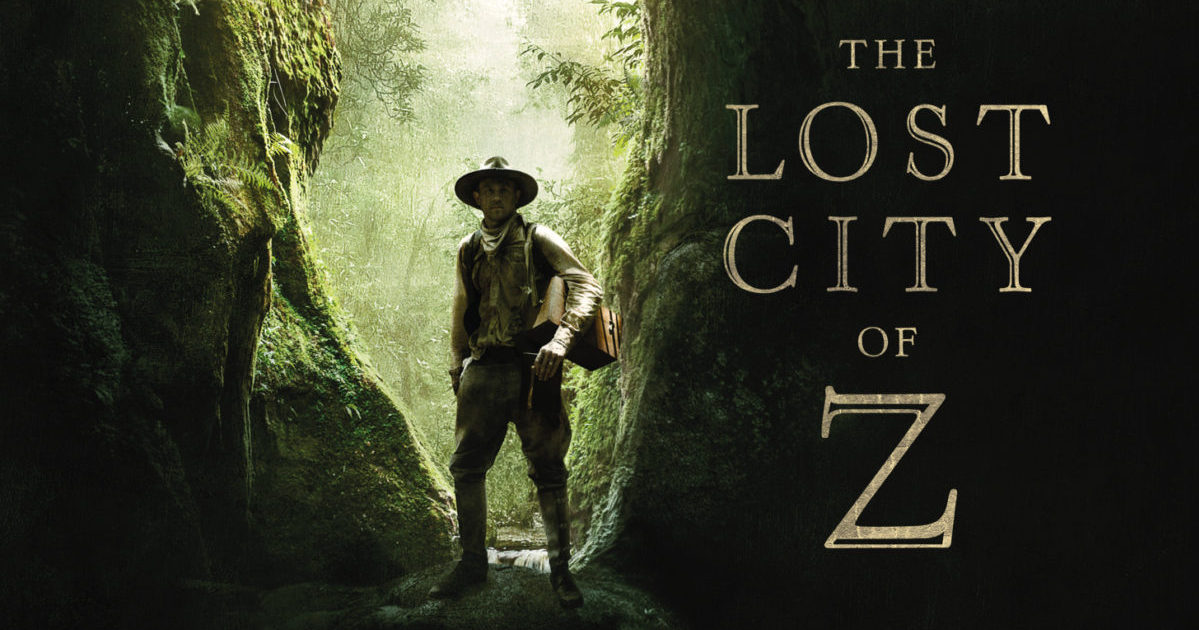 James Gray has a habit of digging up the past. Usually he does it by way of resuscitating unfashionable directorial techniques, genres, and aesthetics, but in The Lost City of Z, he’s found a subject that’s a natural fit for such treatment. Charlie Hunnam stars as Percy Fawcett, a British explorer who in the early 20th century made several expeditions to the Amazon in search of an ancient city he was certain was buried there. His archeological colleagues, steeped as they were in the idea of Western (and especially British) exceptionalism, are largely unsupportive both financially and emotionally of his endeavors, and these trips leave him estranged from his wife Nina (Sienna Miller) and son Jack (Tom Holland, for most of the film) back home. His sole sliver of support comes from the eternally indulgent Henry Costin (Robert Pattinson), a fellow adventurer who seems to have few dreams of glory, only of experience.

I knew nothing of Fawcett before seeing the film, and can claim no knowledge of Gray’s adherence to the facts of the case, but Gray gives the impression that he is as much imagining a life for Percy as he is relaying it. Percy maintains a rich inner life, his desires and anxieties as much the film’s subject as his considerable achievements. The few instances in which we can be sure Gray imagines Percy’s possible discoveries are beautifully conceived and executed, the transcendent experience of the jungle as clear to us as it must have been to him.

This taking place when it does, these trips are not quick affairs. Gray and editor John Axelrad craft a rhythm similar to that of Synecdoche, New York, where a cut can cover an instant or years. Nana Fischer’s make-up work with Hunnam, Pattinson, and Miller allows us to chart the relative time that passes, but even then I was shocked to learn how many years can pass on a single expedition. This method underscores how lost Percy has become in his quest, how little time he has to accomplish what he wishes to, and how much he’s missing back home in the endeavor. His family is happy to see him when he’s there, but they can’t fully understand what drives him. Nina even yearns to accompany him, but Percy can’t see a way for a woman to survive the jungle. When he lays out his case against it, the hardship and disease and violence inherent in the area, it seems as though he resents the hold it has over even him.

Hunnam, an actor often derided in cinephile circles but whose work I just don’t know well enough, is quite good here, tapping into Percy’s boastfulness and pride by way of the unusual nature of early-20th-century speech and posture. Not since Spielberg’s Lincoln has an American filmmaker so successfully tapped into the strangeness of the time period. It’s a very presentational performance, but one that doesn’t try to pummel subtlety. Percy never says the opposite of what he means, but often chases the side of himself with which he is most comfortable. As with We Own the Night, Gray is interested in watching this exterior pride erode into vulnerability; as the film comes to focus around Percy’s relationship with his son, so too does Hunnam age Percy into a man comfortable opening up to others by way of maintaining his authority over them. It’s a delicate dance. We’ve seen a thousand movies about men coming to terms with their feelings that seem to betray the person they are in the first half of the film for the cheap sentimentality of a pleasing conclusion. Here, Percy’s ability to connect with his son is still very much on his own terms, and all the more cathartic for it.

Reuniting with the great cinematographer Darius Khondji after their collaboration on The Immigrant, Gray is once again interested in a sort of imperfect perfection. Their ornately-crafted images avoid the polish of modern 4K-ready photography, slipping further and further into the sort of unreality with which the editing toys. Gray has become sort of famous for his final shots, and The Lost City of Z may contain the best of them yet.