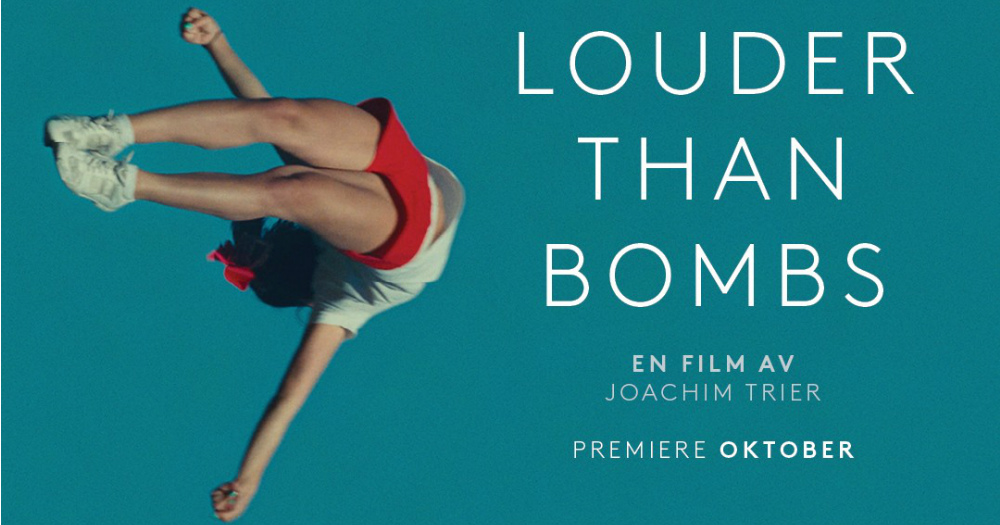 In making his first English-language film, Norwegian filmmaker Joachim Trier has lost none of the sensitive ferocity that gave his first two films – 2006’s Reprise and 2011’s Oslo, August 31 – their bite. Not that’s it’s been particularly unusual to see Scandinavian films about people stuck in self-destructive ruts, but the specificity and oddball humor Trier employed there serve him all the better with his American debut, Louder Than Bombs.

Jonah (Jesse Eisenberg) is back visiting father Gene (Gabriel Byrne) and younger brother Conrad (Devin Druid), ostensibly to organize a retrospective of their late mother’s photographs, but more directly, we come to intuit, to avoid spending time with his own wife (Megan Ketch) and newborn child. It’s been a few years since Isabelle (played, in flashbacks, by Isabelle Huppert) died (by suicide, we quickly gather), but the men she left behind are still reeling from her absence. She went quickly, in a car accident, when Jonah was finishing college and Conrad was too young to fully grasp what happened.

Grief and tragedy are almost impossible to reconcile. Discussed immediately, they lose clarity. Discussed too late, they start to feel irrelevant. Especially for men, our tendency to put on a brave face eventually extends into years, trapping us in a facade we erect merely to get through the next few days. Gene is more open to discussing what they’ve been through, though we gather this attitude is a somewhat more recent development. Byrne plays his attempts to communicate with his sons with a degree of trepidation, unsure how one goes about reconnecting after two years on autopilot. The rebukes – cheery, but decisive from Jonah, and flatly disgusted from Conrad – don’t feel exhausted of their father’s constant pestering, but genuinely confused as to why he’s even trying.

Eisenberg and Druid show cracks immediately in their facades, Conrad most especially coming across as fragile. Only a teenager, he’s pushing the boundaries at home, where he immerses himself in video games and nihilistic writing, and at school, where he’s pushing the social boundaries of his own desirability. Trier’s realization of Conrad at first feels forced, a petulant manifestation of some idea of disaffected youth (pulling a plastic bag over his head while Gene tries to talk to him, for example), but adds up to a fully-realized character, as unhappy with his reflexive acting out as he is with everything he’s acting out against. Further, his more overt gestures undermine Jonah’s dissatisfaction. Now in his mid-to-late twenties, Jonah believes he’s fully mastered the art of burying grief, using a good attitude and competence to cover any uncertainties people might develop.

To note what Huppert might do with a character defined largely by three things – her depression, her artistic skill, and her addiction to work – almost seems besides to point for anyone familiar with the actress’s accomplishments to date. Where she continually finds the energy and inspiration, I’ll never know, but am forever thankful she does.

Written By
Scott Nye
More from Scott Nye
The Oscar-nominated film is now available on DVD, and is a must-see.
Read More