Watching Gun Crazy is a very different experience now than when I first saw it, which was only about four years ago. The film has remained as thrilling and gut-wrenching as it was then, make no mistake. The aesthetics of the thing, from the one-take bank robbery to the aching sexuality to the somewhat stilted performance styles, are as enticing and fascinating as ever. The film still zips by (not hard for an 86-minute movie, maybe, but then, you get to see enough 86-minute movies and you start to wonder) without feeling as though it ever shortchanged you. It’s a truly great film, no doubt.

Something else has changed in the meantime, however. I’ve had a pretty uneasy relationship with guns as far back as I can remember; you can say it’s because I’m a city boy who didn’t grow up around them or was taught to use them properly, and maybe there’s some truth to that. I don’t suppose either of us could say for sure. But I just don’t really see a demonstrable benefit in owning a gun (let alone many guns that would necessitate an entire rack), or how the wide distribution of guns has made for a better, more civilized society. And I find the obsession in some quarters, the fetishization over owning lethal weapons, to be very disquieting in a fundamental way that couldn’t possibly have less to do with politics or anything like that. I just find violence abhorrent; but what’s more, I don’t think that most gun enthusiasts would be in too great a state of disagreement. 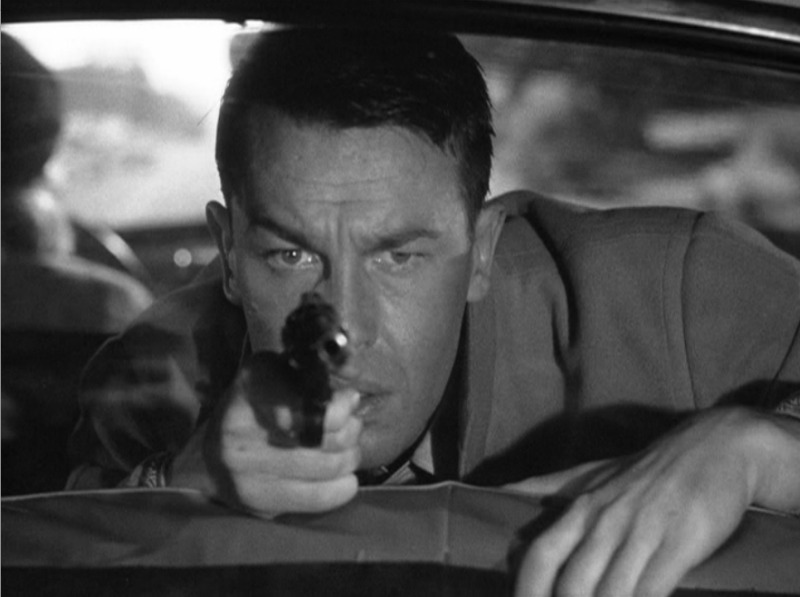 In that way, Gun Crazy seems oddly prescient. John Dall stars as Bart, who, ever since he was a young boy (we see him played by Mickey Little at age 7 and Russ Tamblyn at age 14), has found strange comfort in owning a gun, even though his single violent incident – shooting a baby chick with his BB gun – left him scarred for life. He has no designs on ever turning a gun on anyone; he just loves to shoot targets and such. Pretty harmless, right? Well, sure, at least until he meets fellow sharp-shooter Laurie (Peggy Cummins), whose rather pronounced and undeniable sex appeal stands in stark contrast to her totally debased moral values. Sure, she talks a good game, about trying to improve herself, turn good from bad, but no sooner do they fall on rough times than she’s insisting that some light theft is the way out for them, and no sooner has she suggested it than he’s got a gun to some poor clerk behind a counter.

The film has been noted for rather obviously influencing Bonnie and Clyde (one need only take a look at Laurie’s penchant for berets to make that connection), but where Arthur Penn’s landmark was perfectly happy to celebrate its titular outlaws, with only their eventual punishment to suggest otherwise, Gun Crazy is soaked in the absolute terror of its subjects’ actions, both for the perpetrators and their victims. While Laurie seems to get an almost sexual thrill from their exploits, Bart only offers occasional enthusiasm, with Dall frequently playing their hold-ups with the sort of dread more typically associated with death row, where one has plenty of time to anticipate the inevitable fate while regretting every move that has lead there. 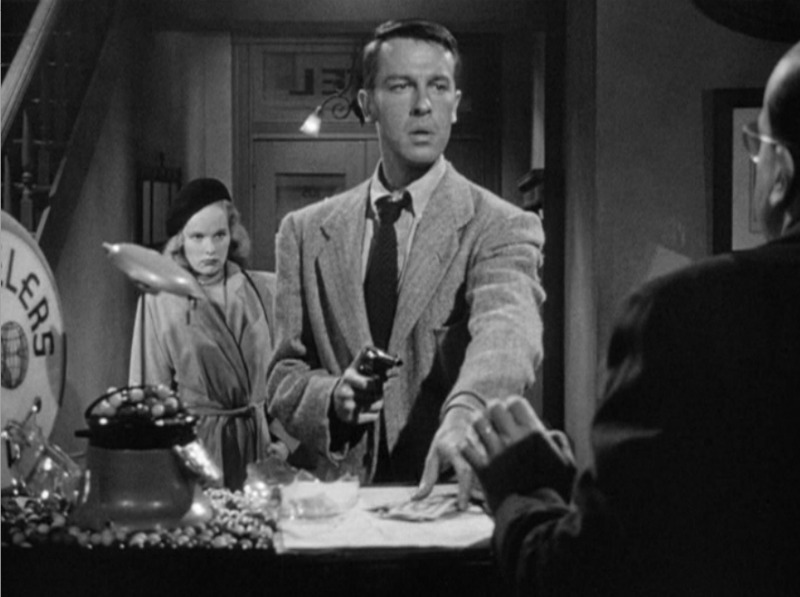 Bart and Laurie’s only shared interest is right in the title – they’re really passionate about their weaponry. I don’t think the film is suggesting, nor am I, that such an interest naturally leads to violence, and one of its best attributes is how little it strays into any sort of psychological analysis or assignment. Besides, it’s Laurie who encourages the crime; Bart, arguably the more sensible of the two, is too wrapped up in his love for her to think sensibly, but she’s far from the typical femme fatale. That role more often positions women to manipulate men in very calculated ways, but she’s honestly crazy for him, too, just crazy for a lot of other things as well, mostly excitement. That might come from guns, or fast cars, or interesting men, or, hey, robbery.

These multifaceted layers really keep Gun Crazy cooking, as director Joseph H. Lewis keeps finding new ways to set up and depict their otherwise fairly similar robberies. Beyond its thematic resonance, which I find quite considerable, it’s just a really fun movie to watch, one that offers all the thrills of outlaw activity without shortchanging the moral decay therein.

Gun Crazy plays the Northwest Film Center on Friday, January 3rd at 7pm and again on Saturday, January 4th at 8:30pm as part of their wonderful Treasures from the UCLA Archive series. More information her

Written By
Scott Nye
More from Scott Nye
The film once too dangerous to release at all is now available...
Read More