There is a cultural tendency to gradually wall people off as they age. Whatever emotional growth one has to do should be concluded by thirty, at which point you will be on a career track that will define your life. Once you’ve reached middle age, you’d better be done sorting out the rest – kids, marriage, and finances should be in place. You’ll own the house that you’ll either die in or move from into a nursing home. And make way for the younger generation.

That younger generation has been the focus for writer/director Aaron Katz, whose first three films (Dance Party, USA; Quiet City; and Cold Weather) displayed tremendous insight, by way of texture and detail, into the ways in which men in particular both rush towards adulthood while retreating further into themselves. With his fourth feature, Land Ho!, on which he has teamed with Martha Stephens, Katz suggests that those sort of tendencies are not only the province of the young. Colin (Paul Eenhoorn) and Mitch (Earl Lynn Nelson) are two former brothers-in-law (each married sisters, neither of whom factor into their lives any longer) who, spurred by a desire to latch onto whatever life they have left, spontaneously decide to travel to Iceland. So they do. 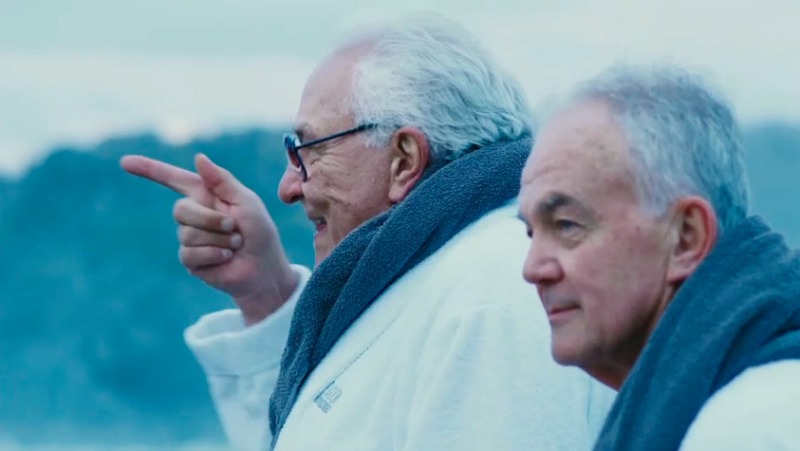 And they’re a little out of place, a little too exaggerated, a little too uncouth. Mitch in particular. Nelson is the very model of a blown-out American, content with his gigantic rental car, poor manners, and sexism, because, hey, it’s gotten him this far. Stephens and Katz, to their credit, neither condemn nor applaud this. When the two men have dinner with Mitch’s much younger female cousin, his lecherous remarks that they dress in more complimentary fashions constantly border the obscene, or even assaultive, without quite crossing that line. There’s tension there, but also humanity; the girls know how to handle themselves, and him, and all understand total limits.

Colin, for his part, fancies himself a bit more cultured than Mitch, while recognizing on some level that this is motivated as much by shyness as by respect. He may dislike Mitch’s nature, but without it, he’d still be sitting at home, quietly living out his retirement. Eenhoorn and Nelson are natural performers; the former received a tremendous showcase in last year’s lovely This is Martin Bonner, while the latter still maintains (as his character does here) a career as a doctor, hustled into a handful of films only at the request of Stephens, his cousin. Their screen presences are perfectly suited to the style commonly called “mumblecore” – reflexively revealing, an inability to not belie something of themselves, giving a sharp enough eye behind the camera.

As with many films of this size, nothing much happens in Land Ho!, but it understands that with very little, a great deal can be explored.