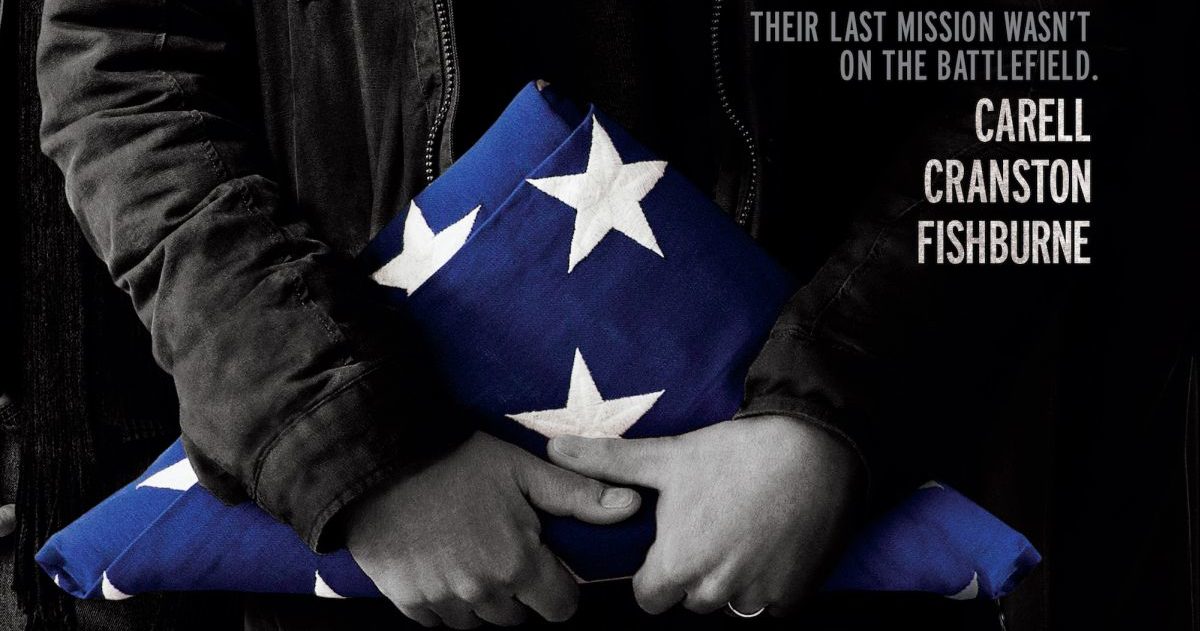 Hal Ashby’s The Last Detail is one of the greatest films ever made. Richard Linklater’s Last Flag Flying, its quasi-sequel, won’t rank among the best of the year. But don’t let that get in your way. The film picks up some thirty years after two rowdy Marines dropped a young soldier off at a naval prison for some rather minor charges, but these are three completely different characters. Don’t let their weird similarities to Jack Nicholson, Otis Young, and Randy Quaid fool you. Bryan Cranston, Laurence Fishburne, and Steve Carell – no matter how often they seem to be imitating their predecessors – are technically their own characters. And this lets the film get away with a lot, even when it’s doing a little.

As before, the three men set out on the road. This time they’re not imprisoning a boy, but burying one. “Doc” (Carell) hasn’t exactly kept in touch with Sal (Cranston) and Mueller (Fishburne), but through the recent proliferation of the Internet (the film takes place in 2003), he is able to find them. And he wants them there when his son’s body is shipped back from Iraq. The parallels to the two generation’s experiences are there for the taking, and soon snatched up. But the film makes even clearer that every generation is called to battle, made to die, leaving those left forced to feel good about their service. What’d be the point otherwise?

This ambivalence about the armed services connects Detail and Flag thematically. They were the best of times, the worst of times, and everyone spends a good deal of time spitting over what they’ve been made to go through but steadfast in feeling they wouldn’t trade it for the world. It may seem hypocritical, but I suppose just about everyone does it about something or rather. It may be that “God has a plan” or “everything happens for a reason” or plain old “shit happens.” But what Doc, Sal, and Mueller go through is earnest and honest, an unwillingness to let go of their pride mixed with the bitter knowledge that they don’t have everything in the world to be proud of.

Linklater is one of the modern masters of the relaxed pace, conveying onscreen the stride of life. He’s given more dramatic incident here courtesy of Darryl Ponicsan’s novel (and co-screenwriting credit) than tends to be present in his more personal, autobiographical work, but a touch here or there aside (an intrusion from Homeland Security is especially baffling), he doesn’t really make it feel like the bother it should. Cranston and Carell are two of the most egregiously showy actors working today, but Linklater gets moments from them that feel genuinely spontaneous and internalized. A scene in the middle of the film when Sal convinces them all to buy cellphones is a particularly lovely bit, each man rushing and retreating in honest ways, palpably excited at re-engaging with a world slowly passing them by.

Linklater’s films don’t always find their proper time. Everybody Wants Some!! was perhaps released too early last year to find a crowd; Last Flag Flying comes too late. Thanks to his recent Oscar pedigree with Boyhood, it comes loaded with awards-season expectations and a small campaign to bolster them. It’s not that good – obvious in parts, short-cutty in others, at once unambitious and overdetermined – but it fits snuggly into a now-bygone fall tradition of just plain decent drama and fairly likable people coming to appreciate one another a little bit more. That’s okay with me.

Written By
Scott Nye
More from Scott Nye
The joy and sorrow of Murnau's final film continues to resonate in...
Read More