The found footage genre (or would it be better to say “style”?) is almost reflexively tragic, not so much as an aesthetic, exactly – though we’ll get to that – but as a point of departure. The premise demands a reason for somebody to find, compile, and present the footage available to them, and, well, it wouldn’t be “found” exactly if somebody didn’t lose it, and somebody wouldn’t have lost footage interesting enough to make a movie unless they ended up dead. Director Sebastián Cordero has some fun calling this into question, but he doesn’t run from screenwriter Philip Gelat’s doomed premise. He has a character with a personal camera, but he rarely utilizes it, preferring instead to keep his distance with a series of cameras installed within his subject, a fictional manned shuttle to the Jupiter moon, Europa. We can observe this story, but we’re never truly a part of it.

We’re introduced to the crew as they make what was publicly understood to be their final transmission, only to discover that – wouldn’t you know it – there was actually hours upon hours of footage they had recorded, but were only able to transmit at the last minute. It’s a stretched premise, to be sure, but if you can roll with that, the ensuing adventure is damn compelling. Making the journey to Europa to find traces of life, they gradually, as these sort of things go, quickly get way in over their heads, as accidents pile against misfortune which are then upset by a touch of what Armageddon termed “space dementia.” And for those of us who love a good story of people trapped in a contained environment in which everything slowly goes wrong, this has all the hallmarks of that unofficial genre. 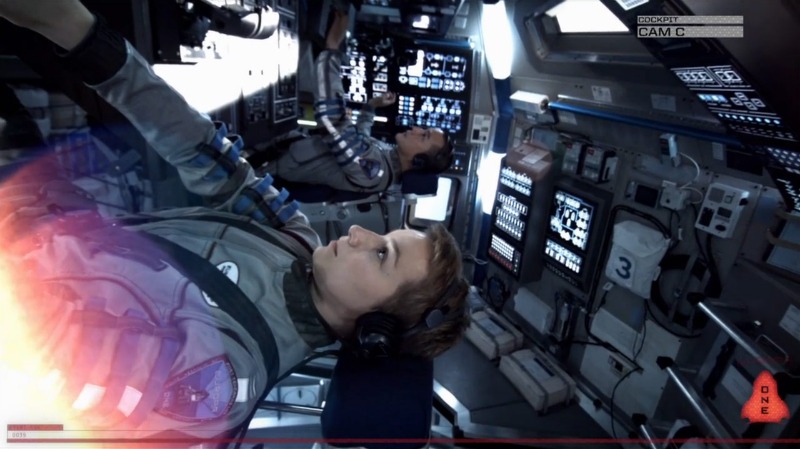 Cordero’s decision to keep his angles wide removes us from a lot of the immediacy of the story, but is much more organic to the detached sensation naturally embedded in found footage. Unlike standard narrative cinema, which demands a constant interaction with the present, found footage is, by its very nature, confined to the past. Whatever we’re seeing is already over, so trying to engage an audience in an active way is almost dishonest; it suggests we can do something about it. Cordero wisely keeps us away, alluding to tragedies (through a few talking heads, as though this were a fully-fleshed documentary) just on the horizon, keeping our fears at bay even as he confirms their inevitability.

None of the performances are of special interest, though they slide into their particular assignments – the crazed paranoiac, the cautious leader, the family man, the too-eager cadet, the logically-minded second-in-command, and so on – with ease. What is really great about the characters, and the cast’s representation of them, is their total commitment to the mission, but also, in a larger sense, to science. Whereas most mission-to-wherevers get caught up in lust, jealousy, and greed, each of the decisions along the way are reached scientifically, reasoning out what would most benefit the mission. That intense dedication compounds the tragedy when things get beyond their control. Frankly, it also means the filmmakers have to get a little bit more creative with their pot-stirring. For those who have long been upset by characters in such films making ridiculous, illogical decisions just to ensure something bad happens onscreen, this should be a welcome reprieve.

The found footage premise is stretched a little thin, and only allows a limited amount of cinematic expression, but Europa Report, like the mission it depicts, succeeds under tough constrictions.

Written By
Scott Nye
More from Scott Nye
An urgent, explosively emotional experience that nevertheless takes some shortcuts to its...
Read More