A Journey Through The Eclipse Series: Roberto Rossellini’s Cartesius

We’re just past the middle of October, so with the semester roughly half over, it’s time for our midterm exam. Please get out your blue book and your Number 2 pencil, the questioning will begin shortly.

What’s that? You weren’t expecting this quiz? You didn’t know that your educational accomplishments would be put to the test? You didn’t even realize that you’re enrolled in this class? My dear student, you must not have been paying attention! What is the purpose of all this movie watching if not to increase our knowledge and make gradual progress toward whatever stage of enlightenment our moral and intellectual grasp can ultimately attain? Building upon the longstanding and universally agreed upon theorem of “Garbage In, Garbage Out,” you are aware, of course, of the corollary principle that every film you watch will make you either dumber or smarter, based on the discretionary quality exercised when making your choice. So I ask two more questions: What type of films have you been drawn to? And what residual effects upon your mind and character can you detect from your most recent selections?

I don’t presume to speak directly for Roberto Rossellini, but the impression I get is that he would have nodded in at least rough agreement with that “corollary principle” I stated just now, at least at the point in his life when he directed the works contained in Eclipse Series 14: Rossellini’s History Films – Renaissance and Enlightenment. With cinematic immortality assured via his powerful  Neorealist classics of the 1940s, by the 1970s Rossellini had become a respected elder statesman of the Italian film industry who nevertheless turned his back on theatrical productions in order to focus on television. He did so with an agenda of instructing the populace, to deepen their awareness and appreciation of the great cultural shifts and intellectual breakthroughs of European history that had produced the civilization, with all its attendant glories and inadequacies, now so easily taken for granted. Having personally lived through and documented a period of great tumult (the Italian experience of World War II), as his society resettled into a comfortable, even complacent routine in the subsequent decades, Rossellini’s focus shifted backward in time to the lives of pivotal figures, emblematic of their era, whose ideas and practices remained relevant to concerns of the 20th century. 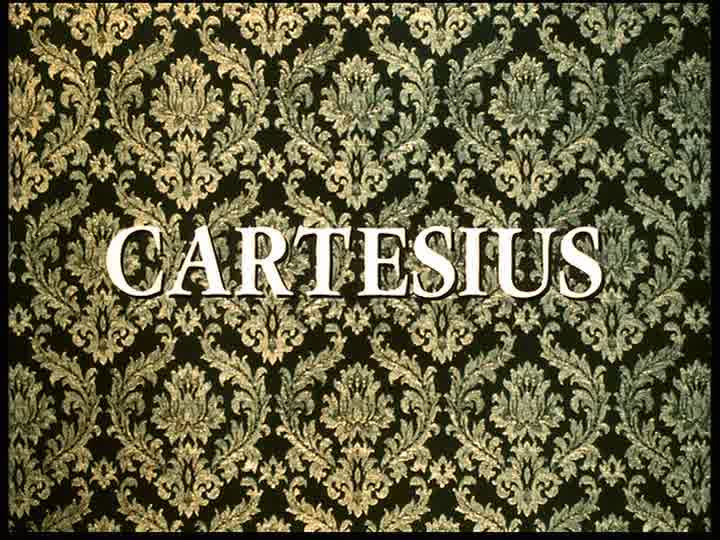 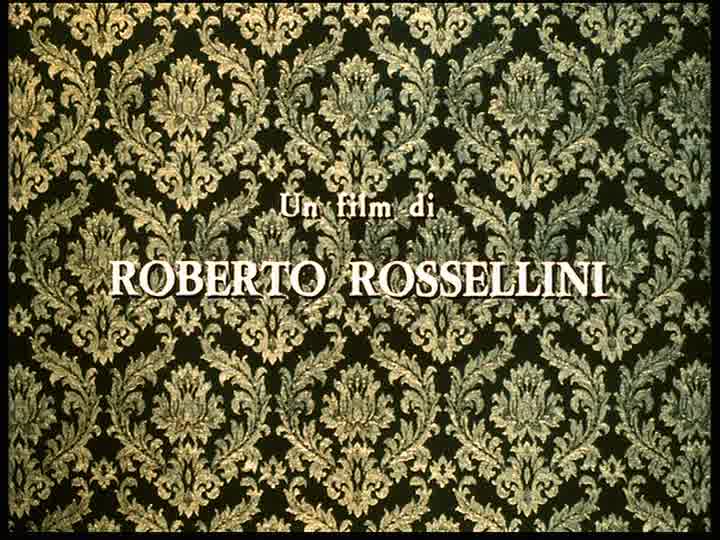 An early example of this interest was Rossellini’s stripped down retelling of the story of St. Francis of Assisi, unadorned by the glossy apocryphal flourishes that typically attach themselves to stories about Catholic saints. The Flowers of St. Francis was a fine example of Rossellini’s naturalistic humanism. Though still essentially pious by today’s standards, the film’s unconventional approach to the material stirred objections from the Vatican hierarchy in any case. Rossellini’s tumultuous personal life (including a notorious affair with Ingrid Bergman that broke up two marriages) added to the pressures that ultimately drove him away from the showbiz side of movie making in order create films with a more didactic purpose.

The more of his work I see, the more he impresses me as an essentially serious and level-headed seeker on a quest for lasting truth. How else to explain a production like Cartesius, a dry and direct recitation of key moments in the life of French philosopher Rene Descartes? As last-minute prep for a Philosophy 101 quiz, it provides a useful chronology and convincing reenactment of 17th century modes of discourse. As entertainment, it fails to deliver much that will emotionally engage the viewer at first glance, with performances consisting of little more than people dressed up in period-authentic costumes speaking voluminous lines of emotionally flat dialog at each other. And in dubbed Italian with subtitles, at that! 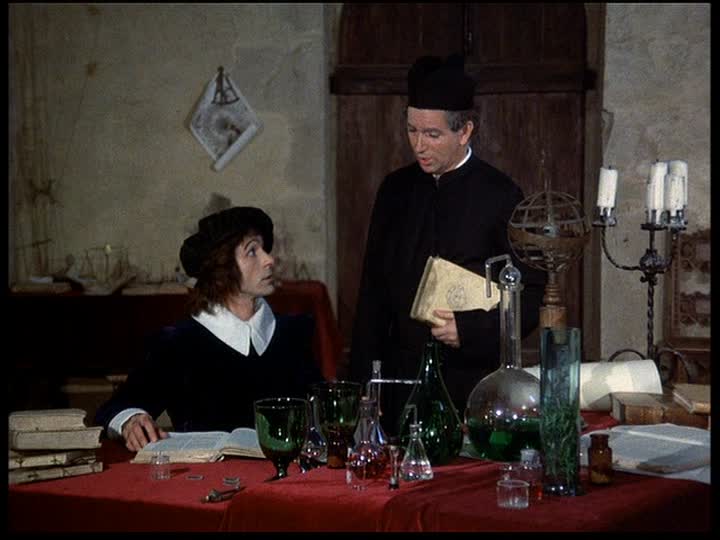 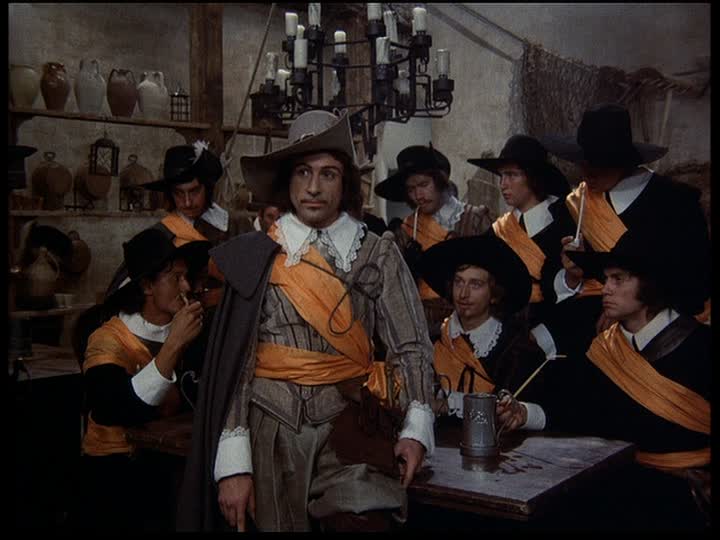 The sets on which Cartesius is filmed look reasonably persuasive in creating the late Renaissance atmosphere in which Descartes lived, so there’s a certain visual appeal to anyone interested in contemplating the conditions of 17th century European life, but the cinematography could not be any more straightforward and unremarkable, mostly one medium range shot after another of groups of people conversing with each other, punctuated only by transitional scenes of Descartes on horseback, indicating a change in location as we follow the itinerant philosopher over the course of three decades, from young adulthood into his maturity, through his restless wanderings from native France to various cities all over Holland, where he dwelt for most of his adult life, seemingly most content to lay about studying his books, thinking his thoughts and shirking his mundane adult responsibilities. 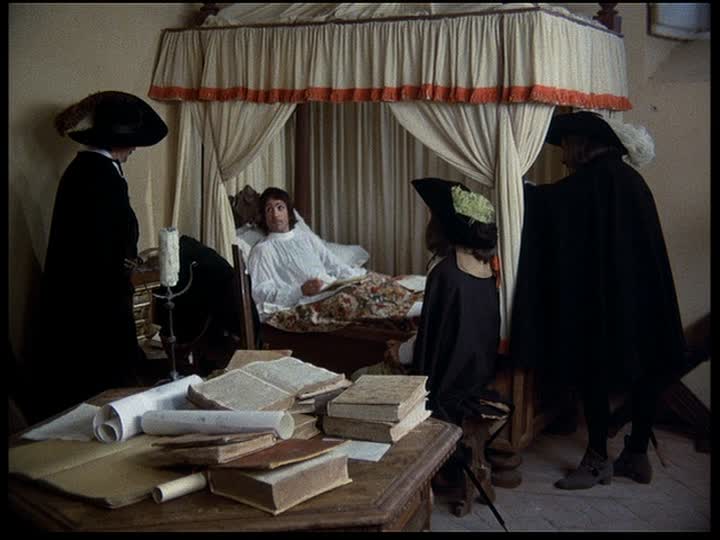 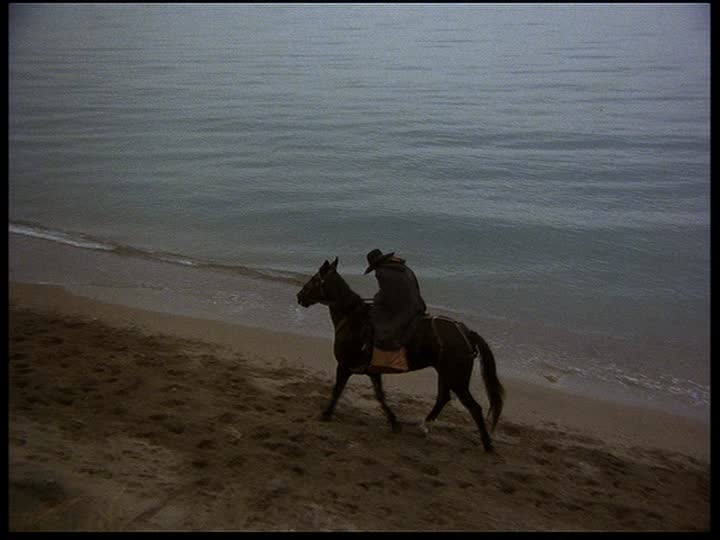 But before you click away from this page convinced that this film and set are not necessarily going to rank very high on your “must see” list, hang with me for a bit, because Cartesius does have much to offer once you’ve adjusted your expectations and are ready to dig into its substance. For most readers, Descartes is best known as the guy who said “I think, therefore I am,” (Cogito ergo sum, in Latin), a cornerstone concept in modern rationalistic philosophy.

Those who’ve progressed into higher mathematics will probably recognize his contributions to the disciplines of geometry and calculus, and his place in the history of science progress is also secured by numerous contributions he made in the struggle to separate scientific research from the limitations imposed by religious doctrinal considerations. 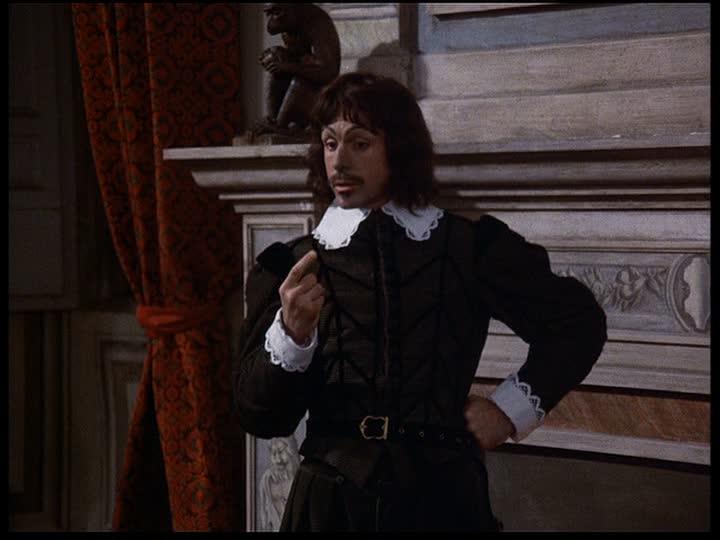 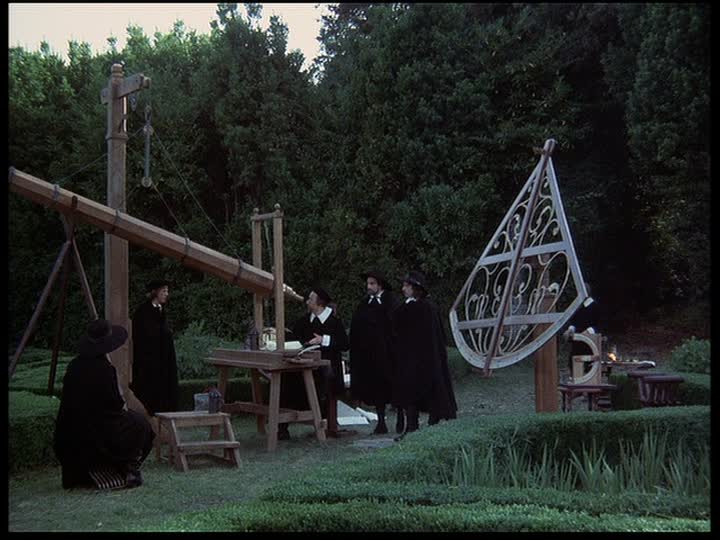 Rossellini’s success in Cartesius is to remind us that the crystallization of these concepts did not happen in a void or without significant risk and expense to the man who introduced them into our cultural lexicon. Though the portrayal of Descartes’ life and times is weighed down by a pedantic approach and barely leavened with anything by way of humor, that may well be due to the conditions of that era more than deficiencies on the part of Rossellini and his collaborators.

Europe was riven by wars, conspiracies and the grave threat of religious persecution if one’s theological stance veered too closely to one of any number of heresies, with competing ecclesiastical power structures (Catholic and Protestant) following up their stern warnings with persecutory actions. Resisting the temptations to either smother his original thinking under a blanket of bland conformity to the church or take up common cause with the so-called “innovators” who were too often chopped down when they got too far out of line, Descartes nimbly dodged these threats throughout his career even as he was employed as a soldier and scholar by those very forces. 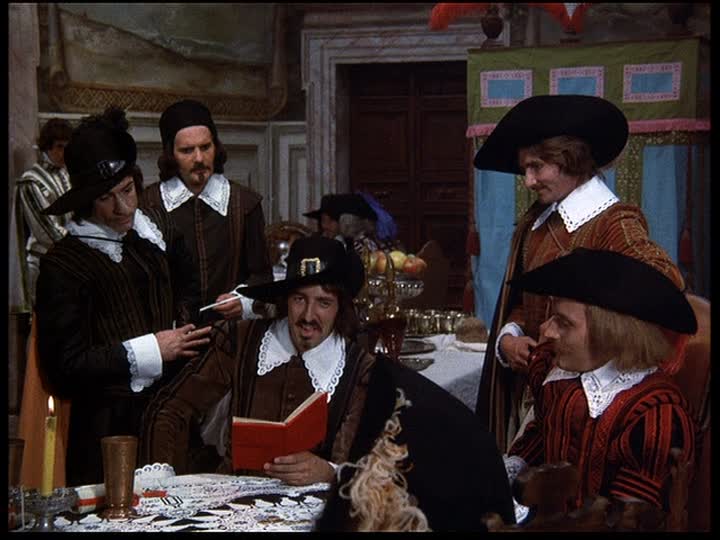 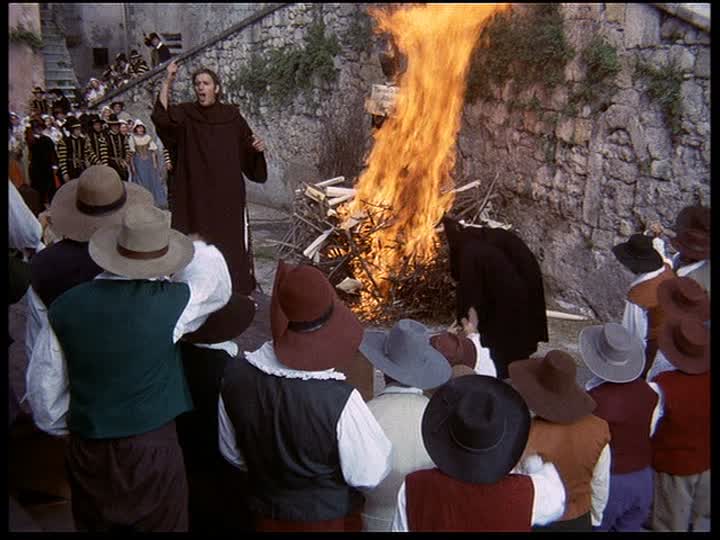 Given these pressures and perils, it’s hard to completely fault Descartes for taking the extremely introverted path that he did as a means for protecting the beautiful mind he knew he possessed. He takes great pains to compartmentalize his propositions about the workings of the natural world from the seemingly incompatible accounts found in sacred scripture or in the nearly-sacred teachings of ancient sages like Aristotle, allowing theology to reign supreme and unquestioned in its own domain even as he argued at length for the primacy of reason and measurable evidence when studying the observable phenomena of the universe.

Still, the watchdogs of orthodoxy remained ever vigilant, drilling into his arguments to see if any hints of heretical tendency could be sniffed out. I gained a clearer understanding of how closely guarded all branches of knowledge were back in the Middle Ages, and how crucially the authority structures both then and now seek to maintain the upper hand in setting the limits on acceptable ideas. We don’t have to go too far to see similar struggles over the interface between religious doctrine and the education of youth still playing out in our own times. 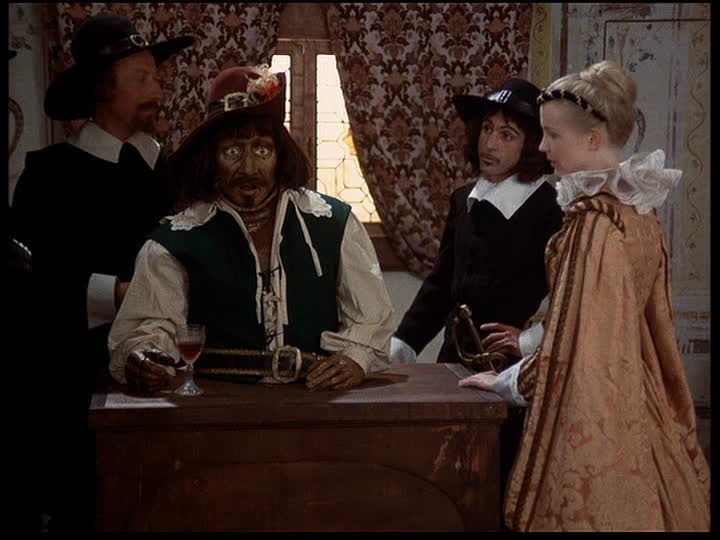 Beyond the seismic cultural upheavals that Cartesius alludes to as church authority began to erode and the era now known as the Enlightenment got underway, there’s also the story of Descartes the man to appreciate. Even as his social isolation served to shield him from some of the hazards of the times, it also prevented him from maintaining any kind of lasting human friendships. Throughout the course of this lengthy (2 hours, 42 minutes) two-part film, we only see him befriend a handful of men, though even those he feels closest to sometimes go years without seeing or receiving correspondence from him.

Even Helene, the proverb-quoting, salt-of-the-earth servant girl with whom he fathers a daughter, is kept at a distance as he spends very little time living with his new family in order to attend to “other duties” – namely teaching a lovely blonde benefactor, wife of a wealthy Dutch trader. It’s in her salon, surrounded by what appears to be a court of advisors, that Descartes finally makes the inevitable “Cogito ergo sum” speech that we’ve been waiting all movie for. (Sorry, no subtitles, but I’ve provided a transcription in the comment box on the clip’s YouTube page.)

When the line is finally uttered, it’s spoken in ordinary tones, as if Descartes was completely unaware of the bumper sticker, readymade for parody potential of his quip. And if that was the case, I can’t blame him. The dude was probably shaking from the inside due to the pressure of having to hold such world-changing ideas so close to his vest over the course of a lifetime. The years of reflection, analysis and self-critique he spent formulating his ideas before actually committing them to writing, and then to the riskiest step of all – publication in a book, with the heresy-hunting hell hounds on his trail! – cost him quite a bit in terms of personal happiness.

“Science prevented me from living,” one of the last things we hear him say on screen, puts his impressive intellectual achievements in a more personal perspective. The quote should give a lot of us writers, bloggers and instant opinionaters a bit of a pause. As Descartes proved, sometimes fewer and more carefully considered words serve our cause most effectively. 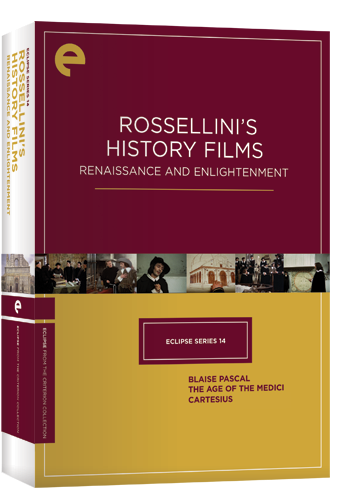 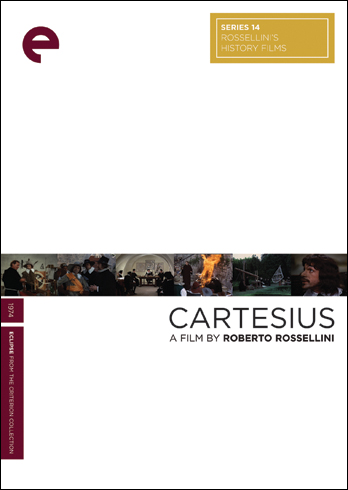