With the release of the amazing Brian De Palma film Blow Out today from Criterion (which the stellar blu is half off on Amazon right now), there’s one film in his repertoire that I’ve been wanting, wishing and waiting for to be released within the Criterion Collection. And that film is his off the wall horror musical, Phantom Of The Paradise.

With only one of De Palma’s films already in the collection (Sisters) and with the new interest in his filmography (BAMCinematek just had a fantastic week long retrospective of all his suspense thrillers, which Phantom was a part of), now is the time to present the world with a proper Blu-ray and DVD release of an underrated classic. Always being in the shadow of The Rocky Horror Picture Show, I’ve grown up appreciating the tragic love story and the superior music of Phantom of the Paradise on a higher level and have never understood why this film has kind of gone a bit unnoticed over the last 37 years.

Having finally seen the film with a packed audience of fans and first timers watching it, the eruptions of laughter, singing along to the Paul Williams’ songs and the appreciation of the camp factor of the film, the film has been in the shadows for far too long. Having fans that range from film critics to Guillermo Del Toro and Edgar Wright, Criterion would be foolish not to take advantage of the love and passion people have for this film. France is the only country who has a good Blu-ray release of the film with a few extras, while everywhere else has a shoddy print and no extras to even speak of. Some people say less is more, but not in the home video world where when a DVD doesn’t even have a trailer, it’s looked down upon right away.

So what kind of extras does this film deserve? Plenty of them, if you ask me. If there’s any retro interviews or making-ofs available from the time of the shoot and afterward, that would be amazing. Another sit down interview with Noah Baumbach with Brian De Palma again would be sufficient. Why not give us a new feature length making of, showing the whole film making process, how it almost didn’t get made, the hype and the ultimate failure of the film initially but the triumphant resurrection of the film in the years since its release. Have fans and actors alike speaking about the film. William Finley, Jessica Harper and Paul Williams are the definite trio of people we fans would like to hear from.

Paul Williams and his music making process, for this film and any other film and project he’s worked on, would also be wonderful. This is the man who gave us this score and wrote ‘The Rainbow Connection’, which alone makes him essential in the film score world. I could also see a fan commentary (because De Palma does not do them) with Del Toro and Wright, or anyone else for that matter. We can even have film scholars or better yet, anybody who was involved with the film and wanted to talk the technical side, like producer Edward R. Pressman, who every time I’ve seen him speak has had candid things to say about this film and the various other classics he’s worked on.

Most might look at this film and ask, “Why should Criterion waste their time on this weird film?” And as a Criterion fan and enthusiast, I look at a film’s merit in the world of cinema, history and those people it has touched since its release. Being a misfire doesn’t mean the film means any less. And that a film like this isn’t playing midnight screenings throughout the country or the world for that matter, is a crime against kitschy film fans. A film ripe for rediscovery by those who might have only heard the name, and for us, the Phantom fanatics out there who are begging for a proper release, please Criterion listen to this one Phantom lover, Swan enthusiast and Phoenix admirer and give us a film that is awarded with repeated viewings. Maybe if this is listened to, maybe we can have Dressed To Kill down the line?

From the amazing Robert Nishimura of Primolandia Productions, his For Criterion Consideration video for Phantom of the Paradise. I agree 100% with him.

And his proposed cover for the film. 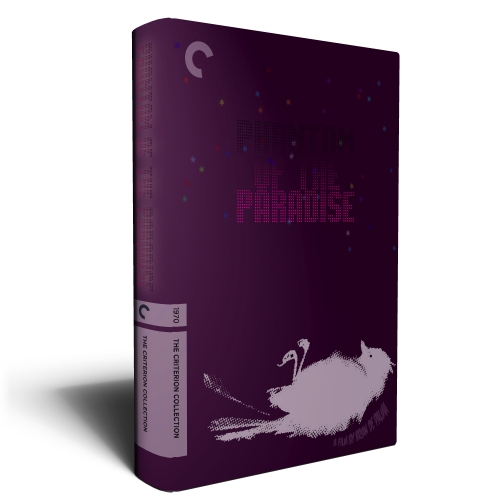