Discuss: What Would You Want In A Criterion Collection iPhone / iPad Application?

With the recent release of the iPad, with it’s new abilities to stream Netflix films directly, including many Criterion Collection films, we often wonder when we’ll see an official Criterion App.

One of the coolest, most dedicated Criterion Collection fans we’ve met via our podcast has recently posted a fascinating proposal on our forum, laying out what he’d like to see in a Criterion App. You can see West Anthony‘s proposal below.

We’d like to bring the discussion to the blog, so leave some comments below, laying out what you’d like to see in such an application. Wouldn’t you like to see an icon like this show up on your phone one day? 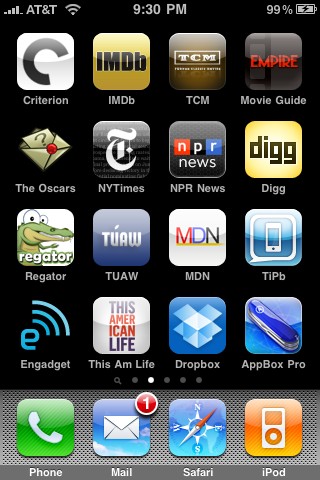 At this moment, there are approximately 150,000 iPhone apps in existence, and that number is projected to double by the end of 2011. And with all the movie-related apps out there, it’s a shame that the Criterion Collection has not thrown their hat into the ring. It’s certainly possible, and they could even charge a reasonable $2.99 for it to defray the costs of development. (The TCM app is similarly priced, and it has several features I’d like to see in a Criterion app.) Here’s what I’d like to see in a Criterion iPhone app:

A comprehensive list of all Criterion titles — including out-of-print films — each with its own display featuring cover art and information such as spine number, year of release, director, country of origin and principal cast and crew. (You should also be able to click on the cover art to enlarge it to fill your screen, and set the ones you like as your homescreen wallpaper.)

At the bottom of the display page for an individual film would be buttons for A) an essay about the film such as those already on Criterion’s web site; B) links to film clips or trailers (which Criterion already has on their YouTube channel) — clips would open in the app and return to the display page when finished. TCM is already doing this; C) adding a film to either an “own” list or a “want” list; and of course D) a button to buy the film on DVD or Blu-Ray, which would either take you to the Criterion store on the web or enable members to order from the app, like Amazon’s iPhone app.

There should also be a button on the app’s home page that takes you to blog entries, and news about significant doings in the cinema world, as well as pertinent information about upcoming Criterion releases. This information can be updated each time you open the app.

Of course, as more films are added to the collection, the app would be subject to frequent updating; this is why charging for it would be a good idea; I believe that $2.99 would offset the cost of the man-hours that would be required to maintain the app (though I would be willing to pay as much as $4.99) Now, I’m not an expert in these matters, so for all I know it may even be possible to add updates to the collection list simply by opening the app. At any rate, that’s my two cents on the subject of the mythical Criterion iPhone app. Maybe if we bombard Criterion with e-mails — or the well-known psychological gambit of whining and begging — we can make it a reality!