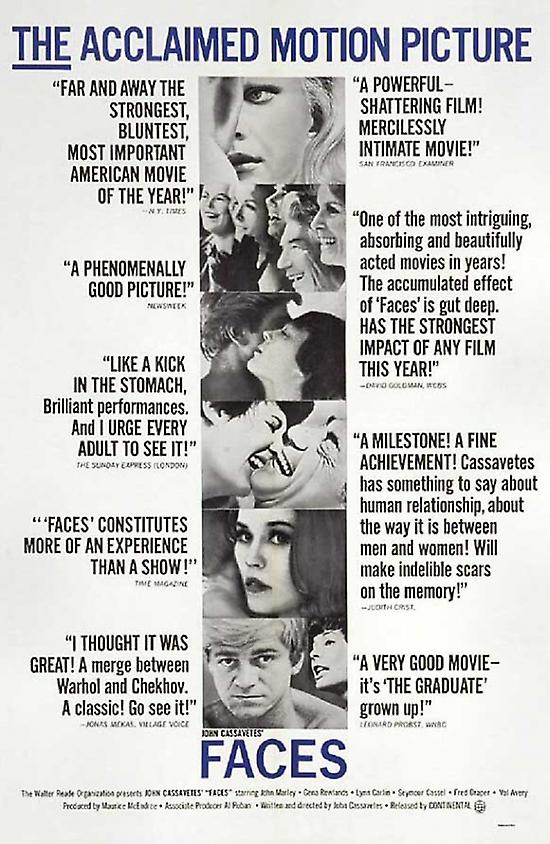 Faces holds a singular and pivotal status as one of the most significant breakthrough films of the 1960s. It played a crucial role in establishing a truly independent movement in American cinema. In depicting with unforgettable rawness the misery and repression endemic in a certain portion of the affluent middle class suburbia of its era, Faces offered an alternative, though still embryonic, creative counter-force to the Hollywood system that was in a confused, decadent situation when the film was released in 1968, following two and a half years of scrappy efforts to edit and assemble footage shot in the summer of 1965. Director John Cassavetes used money he earned as an actor to fund the project, and drew similar commitments from a wide array of friends, colleagues and connections, including those most intimately involved in the making of the film, to pursue an artistic and philosophical vision that spoke profoundly to his times and still holds the power to deliver shocks and surprises to viewers who think they’ve seen it all nearly half a century later.  At times, the dialogues and conflicts that energize Faces are so potently over the top that they risk alienating, even actively repulsing, a segment of its audience that might have a hard time enduring the unvarnished emotional pain revealed by the actors in one scene after another. There are no heroes to root for, nothing that might be pointed to as ennobling or redemptive or even instructive, if we’re looking for some kind of lesson that might help us to avoid falling into the wretched sorrow that comes flooding through the screen and soundtrack. (This, despite the raucous, often histrionic laughter that builds to nearly assaultive levels at various points along the way.) Still, I consider Faces to be essential viewing, both for its historic significance and as a stark revelation of the widespread wrong turn into crass materialism taken by American culture at the height of its post-WWII ascendancy. The morbid impact of deceptive, commerce-driven self-gratification is displayed with a relentless, deeply penetrating insight by Cassavetes and his cast. Like the drink that the bored housewife Maria requests from her adulterous husband Richard, Faces  comes at us with a hard splash, “on the rocks, straight and dirty.” Uncompromising, rude and occasionally vicious, it functions as a potent form of group therapy, if we dare to allow ourselves to identify with one or more of the pitiable, misguided counterparts found on this particular island of lost souls.

The poster at the top of this column offers a few quips of endorsement from Faces‘ contemporaries, and a pair of reviews I found online (links below) serve to amplify just how profoundly this film was felt by many of the cultural avant garde upon its release. Faces won awards, amazed audiences and made a lot of money in relation to its relatively cheap production costs, mostly on account of how bold and refreshing it was in its original context. This is an important point to focus on in 2017, as I think there might be more than a few viewers who might stand aghast at just how blunt and vulgar the characters can get when addressing each other. That was my initial experience, and I have a bit more to say about the adjustment I made below. But I think it’s worth the effort to put ourselves in the seat of a late 60s viewer, as best we can, by just watching the reactions of the supporting players, the faces in the bars and nightclubs, the bystanders who inhabit this world, in their quest for human warmth, intimacy and something resembling a place where they can rest and feel at home. That earnest, seeking quality is effectively conveyed by the ensemble cast, providing numerous empathetic hooks for us to latch onto. Whether it’s the vulgar men foolishly spouting what they consider to be hard-earned wisdom or the wincing women forced to put up with the sexist insults sent their way in order to preserve some kind of peaceful equilibrium, this is a film replete with heartbreaking moments, even as we roll our eyes or shake our heads at their stupidity and blindness to the problems they seem intent on creating for themselves.

As compelling as the actual film is, the making of Faces is equally fascinating as an object of our contemplation. The supplements provided on the Criterion editions of the film (either on Blu-ray or DVD) demonstrate that this was much more than just a low-budget independent movie that went onto enjoy surprising success and a lasting cultural influence. As Cassavetes put it, Faces wasn’t just a film, it was “a way of life.” The movie was filmed in his own residence, and one of the spare rooms in that house functioned as the lab where all the editing, sound syncing and other details were managed. The production crew lived, worked, dined and partied together as the Sixties reached their peak. We’re privileged to see the director and his pals at work prior to the debut, as Cassavetes explains his motives and intentions in taking such a purist approach, maintaining total artistic control and refusing the temptations of studio financing in order to fully realize his uncompromised vision to speak truth to his peers, and whoever else might happen to watch the film, whether now or then. Standing in stark contrast to the fuzzy technicolor psychedelia of the times, Faces shows itself to be a broad monochromatic canvas with plenty of room for the hip and the square to demonstrate their motivating forces, for all the world to see.

As a person of more reserved temperament myself, who seldom finds himself in the kind of full-blown shouting matches, emotional meltdowns and potential run-ins with law enforcement that I see occurring throughout the running time of Faces, I had to work through a bit of that suspension of disbelief myself upon my first viewing. The harsh insults, coupled with the rapid reversals from uninhibited levity to grim serious confrontation, might come across as extreme, artificial, even manipulative, if they aren’t part of our own personal experience. Once I got over that hump (and watching the supplemental footage of the highly animated Cassavetes himself as he expounds upon his various theories and notions helps quite a bit in this regard), I was able to connect with the genuine candor of the script – its gutsy, unflinching probe of basic human fragility and our accompanying need for egotistical compensations – as a document of its own place and time. Even more, upon a second viewing and more sustained consideration, I was able to connect the pain and longing of these characters to chapters in my own life, and in the lives of others I know and care about, even if I and they tend to express our angst in more subtle and diplomatic ways.

Echoes of couples in conflict and drunken revelries of middle-aged adults still linger in my own memories as a child of the 60s and 70s, so in that sense, Faces functions as an oblique touchstone of my personal history – the cultural milieu that my immediate ancestors were born into, and in their own way helped to create and perpetuate. Watching these sad, desperate grown-ups go through their paces got me thinking about how well I’ve done at managing the inevitable frustrations, fatigues and ennui that accumulate over the course of years. I can admit a few a-ha moments came crashing down on me; some of them resembled scenes I’ve lived through, while others belong more to the realm of fantasy or nightmare, roads thankfully untraveled in my personal experience. My heart goes out, in all genuineness and sincerity, to those who can squarely place themselves in Faces‘ raucous, chaotic, uncompromising narrative of heartbreak, loss and personal catastrophe. I know that, as the saying goes, “there but for the grace of God go I.” Watching this film draws me with eager anticipation to further explore the world that John Cassavetes captured and chronicled for posterity.