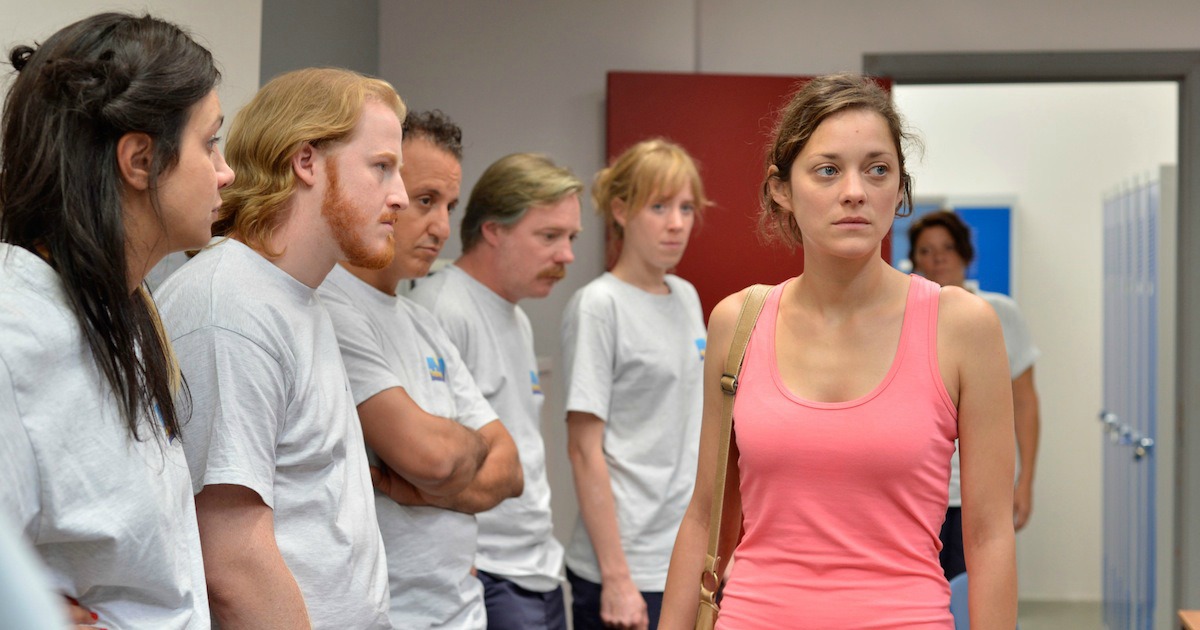 Simplicity is the name of the game for the Dardenne brothers, or, more specifically, outward simplicity. Because however naturalistic and easy to describe the films of Jean-Pierre and Luc Dardenne are they all seem to simmer with raw emotional complexity just below the superficially categorized working-class aesthetics of their exteriors. It works in most cases—Rosetta, La promesse, et. al—but with their new film, Two Days, One Night, the brothers manage to fall prey to their celebrated simplicity a bit too easily. Instead of letting the film’s straightforward story be the foundation for a deep-seated and generous subtext—which, regardless of what I say, many people will still find present here—the film instead fades into repetitive motions that render it relatively insubstantial.

The premise—if you didn’t get it already—is simple: Marion Cotillard plays Sandra, a factory worker in the industrial port town of Liège in Seraing, Beligium who has learned that she is about to be laid off due to downsizing measures at the factory. Her potential termination was made by 16 of her co-workers who were forced by vote to choose between keeping her on the workforce or each getting a €1,000 bonus. Only two people voted in her favor, and it is now up to her to sway the rest of the crew’s votes over the weekend (hence the title) to keep her job after she organizes a second vote to garner the additional seven votes needed to keep her position.

Cotillard’s pill-popping character is a fragile, emotionally wrought woman on the edge, and Cotillard herself is, unsurprisingly, the best thing the film has going for it. From what is revealed, the audience infers that Sandra has had both minor clashes with particular co-workers in the past and a recent mental breakdown that has kept her away from the job for an inspecified period of time, making the majority of her colleagues skeptical of her proficiency. Her and her line-cook husband Manu (Fabrizio Rongione) have just managed to pull themselves off welfare to care for their two children, and the loss of her already meager income will put the family in even more dire straits.

Like a pared down and unadorned version of Norma Rae, Sandra resorts to tracking down each of her workmates by going door to door, asking for their confidence in her abilities and to keep her job. Early on the scenes have that patented downplayed Dardenne authority to them, with Cotillard balancing her character’s timid emotional state with a sobering sincerity. Sandra isn’t asking for pity, but rather for her co-workers to just put themselves in her shoes.

The movie soon tries to keep up a tempo, hopping with Sandra from person to person, and the anticipation of their responses—running the gamut between outright cruelty to kind-hearted empathy—becomes the main draw of much the film. But it doesn’t seem to develop any further from there, and that moment by moment tempo soon loses its rhythm as much of the blue collar commentary that makes up the very small portion of meat on the bone is swallowed up by the film’s own casual reluctance to actually say something.

Despite the lack of real substance, Two Days, One Night still manages to carry with it a magnetic air of compelling drama that never embellishes, and most of it is due to Cotillard. And yet even though she elevates the material with her mere presence it is still problematic. I should clarify so as to not contradict what I’ve previously said—Cotillard herself isn’t problematic, but rather the idea of Cotillard is problematic, mostly because having a quote/unquote movie star of her caliber in this role is a distraction for the kind of story being told. Granted, Cotillard’s name in the credits guarantees the widest exposure of any Dardenne brothers movie to date (and this is from two guys who have won boatloads of awards, including the Palme d’or) but something tells me if they went their normal route and cast a non-actor or less known actress it would have strengthened the film’s overall message of powerful austerity.

This again points to the film’s main problem—does the film progress beyond the basic human story of us sympathizing with a person in trouble, or do we really care about Sandra getting her job back because we care about her character specifically? Or do we care about her simply because it’s Marion Cotillard, that actress from those other movies that you saw one time? Some will say a swift yes to all three, but I’d wager a just as swift no. Two Days, One Night certainly trims itself down in order to tell a simple story, but it may be at the cost of signifying a deeper understanding of the story itself. 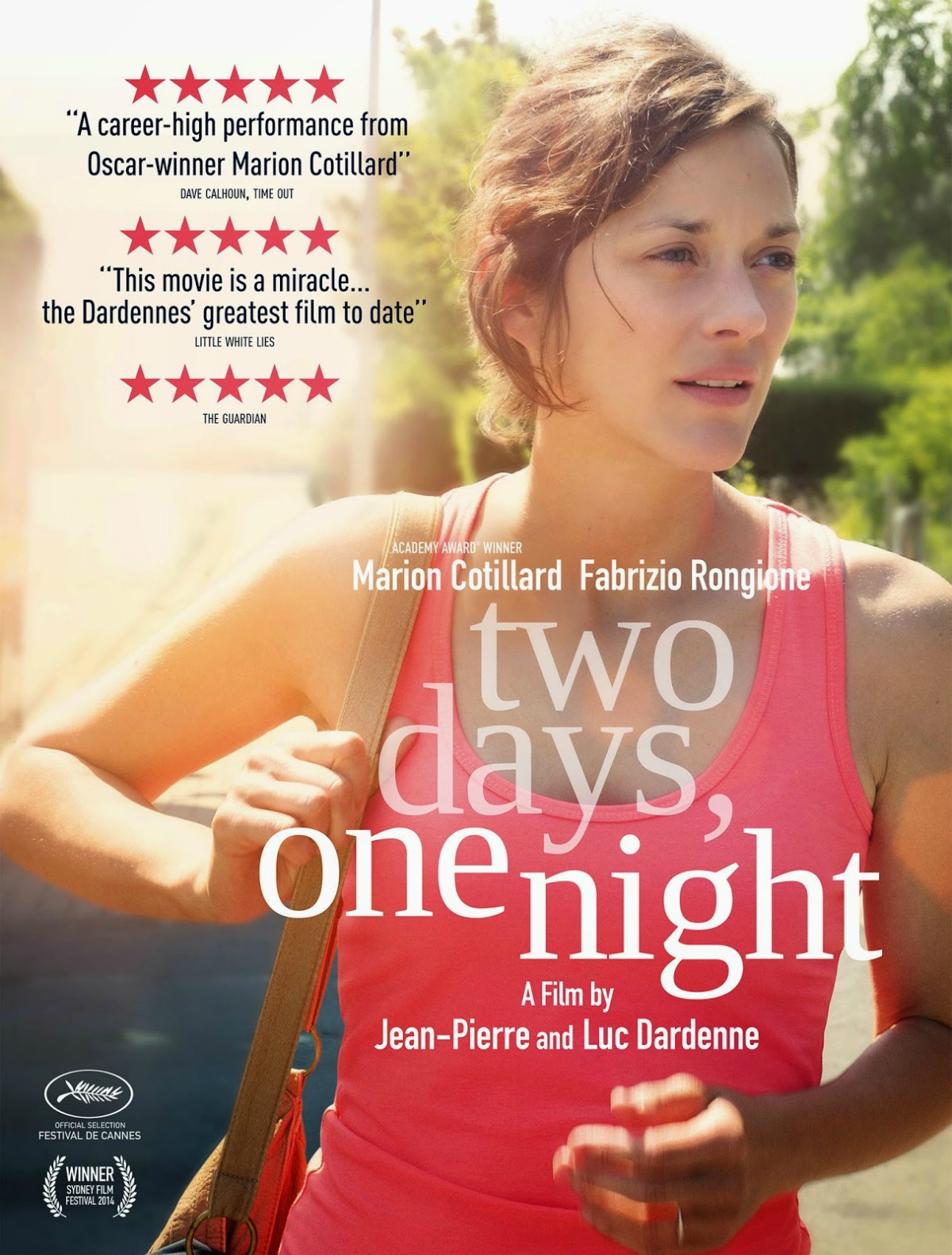 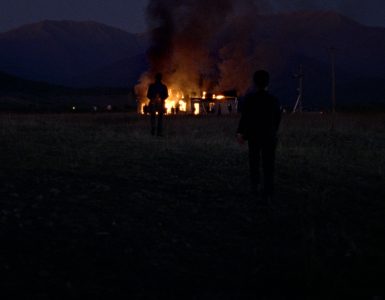 Marking one of the more incredible feature directing debuts, Dea Kulumbegashvili's Beginning is a soul-shattering drama, and an announcement of a major talent on the world cinema stage.