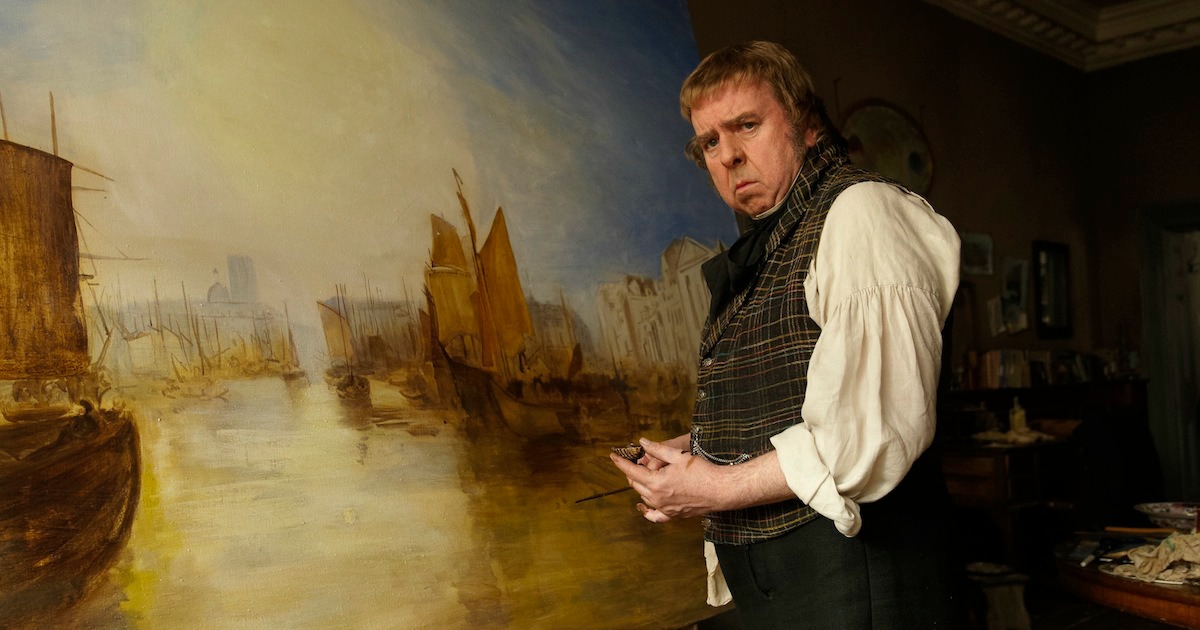 At a certain point—however unconventional it is—a biopic needs to key you in to why exactly the subject it’s depicting is important enough to warrant the biopic you’re watching in the first place. A lot of times these sorts of films overdo it with an overwhelming hagiography that portrays the myth instead of the human being (something like Jobs comes to mind), while others manage to undercut the legend to tell a nuanced story that nevertheless remains fiction (something like Lincoln comes to mind). But what if we get a biopic with neither? Instead of giving us a biographical story that portrays an important figure that tells you their significance you just get a very plain film that just so happens to feature someone who is important. This is how I feel about director Mike Leigh’s Mr. Turner. Neither overwrought nor subtle enough to tell the story of the great British painter J.M.W. Turner, it is a film that never bothers to get down to the business of making us appreciate the person it’s telling a very long story about, even on a character-based level.

Spanning the late 18th century Georgian period into the 19th century Victorian period, the film shows the curmudgeonly painter’s day-to-day life living with his ailing father and homely housekeeper in London, sometimes showing wealthy patrons his next scrawled out work to be bought up and sometimes showing his repetitive jaunts out to stay with a pleasant innkeeper whose rooms along the Margate shore offer perfect painterly views for inspiration—all the while showing his idiosyncratic and anti-social behavior. Other than that, sadly, there’s not much more there to anchor the story on, and we move from scene to scene without it ever latching on to a real narrative base.

Part of it hints at the fluidity of the creative spirit, but not really, and other parts address the intellectual misgivings about the true nature of art, but not really. This sort of free-form structure is Leigh’s wont, and could have made for an interesting mirrored exploration given the similarly semi free-form style in Turner’s own work, but none of it lands. Instead, Leigh falls back on his usual humor-based antics showcasing the foibles of everyday British culture, but rather than, say, a working-class family getting the laughs it happens to be this famous painter and the weird people he encounters. This kind of method is observational and, again, could have worked, but what’s onscreen never really becomes worth observing.

Timothy Spall’s portrayal of Turner is interesting if not a bit of a caricature. Much has been made of the way he grunts his way through the movie, and though it begins as a humorous little tic it soon becomes annoying, mostly because it’s the only thing that Spall chooses to use to truly define the character. The rest of the cast basically comes and goes without a whiff of consequence. Marion Bailey, who plays Turner’s landlady and eventual mistress, makes the biggest impression besides Spall, though it remains unbearably slight. We never get a sense of who her character is and why she would latch onto Turner other than the fact that he turns up every so often for room and board. Things, and people, just kind of happen, and I realize the argument can be made about how this reflects truth and the way real life functions, but you don’t see people making biopics about any old person walking down the street now do you?

The best thing to say about Mr. Turner is the cinematography, which, in a movie about a landscape painter, had to be near-perfect or the entire thing would have come crashing down. Cinematographer Dick Pope captures the countryside and the interiors of the film with a tendency towards flat but lively framed tableaux, positioning the figures themselves in the same palette as Turner’s own scenes. Many of the exteriors early on are nothing short of sumptuous to look at, leading me to believe that maybe an entire movie of these sorts of arrangements would have sufficed.

It’s frustrating when an artist you appreciate is represented in such an inconsequential way like this. Even if he wasn’t recognized in his lifetime as the legendary painter he is seen as today, the methods of J.M.W. Turner still need to come across in a movie about him somewhere and Mr. Turner enigmatically leaves those sorts of things out. He gives us even less. As far as biopic go, you need to feel the need for the biopic in the first place, and Mr. Turner a movie that barely leaves a lasting impression.