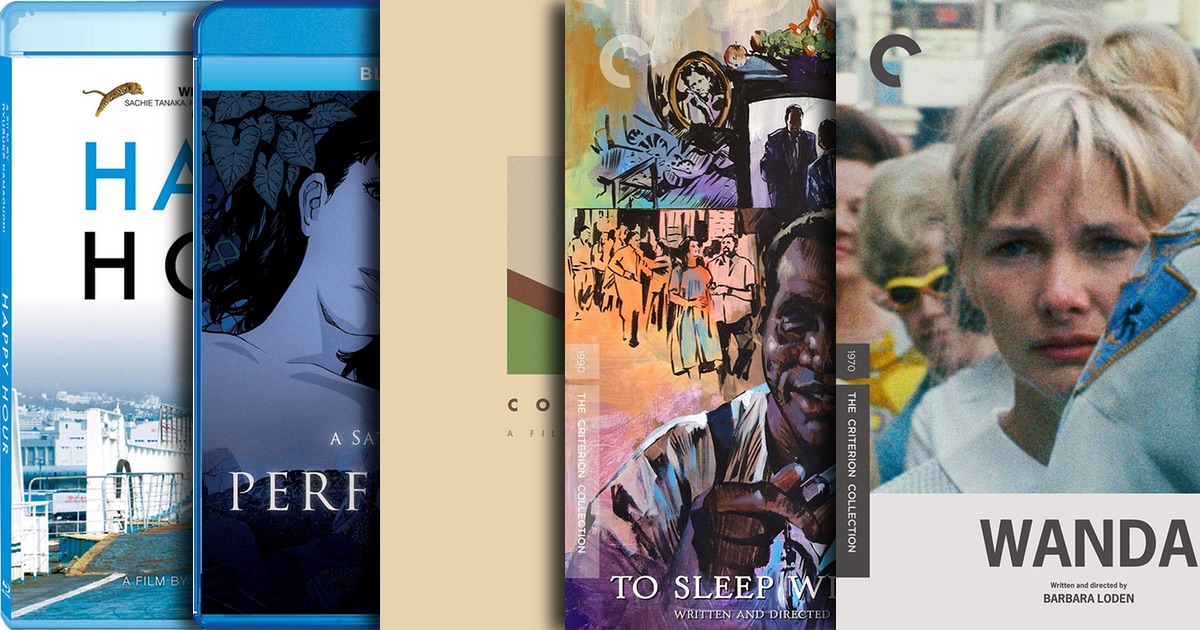 While much of what we do here at CriterionCast is discuss very specific strains of film both historical and current, there are many a home video release or theatrical picture that goes relatively under-discussed within the hallowed pages of this very website. So, as a content provider with a penchant for home video banter, I’ve taken it upon myself to come up with a thinly veiled reference to corporate culture, with the hopes of spinning it into a quarterly recap of the greatest home video releases. So if you’ll indulge me, here’s the first Home Video Quarterly Report of 2019, the five discs that you absolutely cannot afford to miss.

Starting off this list is the thinnest release of the lot, yet also one of the most exciting. With his latest film Asako I & II blazing up the festival trail, KimStim has gone and finally brought to Blu-ray here in the states director Ryusuke Hamaguchi’s masterpiece Happy Hour. A dense, five-hour-plus epic, Happy Hour introduces viewers to four thirtysomething women at moments of profound importance in their lives. The film embraces the dense runtime, immersing viewers into a world fully formed and characters driven by truly human choices. Also embracing the melodrama of the narrative, Hamaguchi crafts a nuanced and humane portrait of love and friendship in modern day Japan, a poetic and lyrically told slice of life drama unlike anything you’ve seen before.

Now, what makes this worthy of inclusion on this tight little list? Well, despite being a long-awaited release of a brilliant and urgent piece of modern world cinema, the film’s transfer looks incredible on a high-end television, and the 2-disc Blu-ray set includes well over 30 minutes of insightful and entertaining cast interviews. KimStim is a lesser-known distributor, so part of this is also an attempt to point readers in their direction. This is a truly special bit of filmmaking that will likely be talked about more as we get closer and closer to those best-of-the-decade lists that’ll come out as the year progresses, and KimStim has done a great service here.

From a relatively unknown distributor to one with a rather strong cult surrounding them. Shocking many cinephiles, Oscilloscope has recently released the incredible Kogonada-directed drama Colombus, stealing what was for a long time rumored to be a Criterion Collection release. Now, we’ve talked about this film at great length, so this will be a bit shorter of a blurb, but what one should take note of is the gorgeous photography that looks ever so lovely on an HD TV. Kogonada is, after all, a video essayist/artist, so drawing heavily from filmmakers like Ozu (the focus on generational differences also seems fitting of the comparison between the two) Kogonada crafts a slow burn drama that’s as beautifully crafted as it is wonderfully tuned to the gestural way humans interact in the 2010s.

A film inherently about space and the spaces we inhabit, the film feels very structural in its composition, with its focus on architecture bleeding heavily into the composition of each frame. It’s really a doozy. And then there’s this new release. The shock here is the inclusion of Columbus Story a wonderfully evocative short film from Kogonada, which adds a great deal of depth to this release, as does a commentary from stars John Cho and Haley Lu Richardson. Both are charismatic speakers and this is a superlative commentary track. Toss in a trailer and some deleted scenes and you have the number four slot on this list.

Number three brings us to the world of anime, and one of the spring’s most anticipated home video releases. Satoshi Kon’s Perfect Blue has long been considered not just one of the great modern anime pictures, but a truly ground breaking achievement in the world of animation writ large. A profoundly surreal thriller of sorts, Perfect Blue tells the story of Mimi (played brilliantly by Junko Iwao), a pop star who decides to pivot to acting, if you will. However, when a new and seemingly unshakable stalker attempts to upend everything the woman has built, things devolve into something both terrifying and impossibly beautiful.

A meditation on everything from identity to agency, Kon’s masterpiece is a textured and deeply moving character study that’s violent, brutal and impossible to forget. Long awaited here stateside on Blu-ray, Shout! Factory has finally done the world a favor and not just released the film bare bones, but given it a glorious new restoration that updates the vitality of the rich colors, but never upends the hazy surrealism of Kon’s original vision. It’s really a triumph of restoration. Oh, and there’s a 40 minute lecture on the film from Kon himself, so if you need any more reason to pick this thing up, there you have it.

2. To Sleep With Anger

What would we at CriterionCast be if not Criterion Collection Stans? The first of two Criterion releases topping off this inaugural over thought listicle is also one of two films long awaited for on Blu-ray here in the US. Directed by Killer Of Sheep filmmaker Charles Burnett To Sleep With Anger is an astonishing work of American independent cinema that’s truly peerless. Featuring a career-defining turn from the legendary Danny GLover, the film is an intense, surreal and transcendent rumination on family and race in America. As brilliantly pointed out by critic Ashley Clark in his top tier essay that adorns the opposite of the fold out mini-poster within this Blu-ray case, To Sleep With Anger is a decidedly singular vision, particularly due to Burnett’s focus on mythology and folklore. It gives the film an intimacy that’s otherwise missing from much of the dramatic cinema of the early 1990s, feeling in close conversation to films like Daughters Of The Dust which would come just a year later and distill this relationship down into something even more almost primordial.

The focus on mythology and storytelling opens up the film to multiple viewings which is always a bonus in this age of instant streaming options, and those viewings will only grow in one’s estimation when put in conversation with these supplements Criterion has included here. Besides the glorious artwork, the film features a new program with cast and crew about the film’s production and impact, as well as a new hour-long conversation between Burnett and filmmaker Robert Townsend that’s an early contender for supplement of the year. It’s overall an incredibly dense release for an incredibly important American picture.

To Sleep with Anger (The Criterion Collection) [Blu-ray]

Speaking of important American films, the top position of this first HVQR is none other than one of the most hotly anticipated home video releases of 2019. Directed by Barbara Loden, Wanda would be the beloved filmmaker/actresses sole feature film directed effort, and what a way to make your mark. Another release we at The CriterionCast have talked a bit about, the film stars Loden as Wanda, an unassuming young woman who has seemingly hit something resembling rock bottom. With a custody case lost and a marriage ended, Wanda begins to wander the Pennsylvania roads with the hopes of trying to get back on whatever track takes her away from here. Oozing a devastating sense of naturalism, Wanda is a film dripping with despair and desperation that makes it a deeply shattering work of American independent cinema. The film has a verite aesthetic, a raw energy that feels both entirely fitting of this down-on-her-luck lead character and yet never loses sight of the cinematic nature of Loden’s filmmaking.

Despite being relatively bleak, the film’s also quite funny, making it all the more heartbreaking. For a good long while, the film was all but impossible to see, and to now see it in a new 2k restoration is a truly wild experience. The transfer is top notch (shouts to Gucci), and the release is absolutely stacked. Leading the way is I Am Wanda an incredible documentary that attempts to dive head first into the life of Barbara Loden and the impact she left on American cinema, and Loden gets the chance to speak not only in an interview in that documentary but also through an audio recording included here and a segment from the Dick Cavett Show that is not to be missed. The real gem? The Frontier Experience, a short film that is not only absolutely incredible, but gives context to the career as an educational film director that would truly become the legacy of Loden. Oh, and Amy Taubin on essay duty here is a must read.