It seems like only yesterday, we were talking about Criterion’s e-mail newsletter hinting at an upcoming release of Charles Laughton’s Night of the Hunter. That newsletter was running a little later than usual, so it looks like Criterion has decided to get back on a schedule of releasing the email newsletter around the end of the first week of the month, usually a week or so before the new releases are announced.

This month we were treated to the following image, of a pair of Gnus on an older television, fully equipped with rabbit ear antennae. The very model of television that one might watch the: Broadcast News? Get it? Broadcast Gnus. The very same Broadcast News, directed by James L Brooks, with an incredible cast: William Hurt, Albert Brooks, Holly Hunter, Joan Cusack, and Jack Nicholson (see: New Hollywood Box Set Rumor) 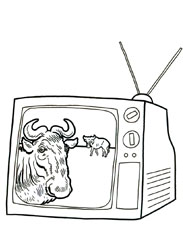 When I proposed this theory to my cohorts at the Criterion Cast, I got more than one suggestion that it could also be Sidney Lumet’s Network, a film that I’ve recently caught an inordinate amount of flack from certain listeners, for simply pointing out that the movie was far too hyped in my mind when I finally watched it. I’ll admit that I would much rather see Network in the Collection, over Broadcast News, although it has been years since I’ve seen the latter. The film is currently available on Netflix Watch Instantly, so I might just throw it on again one of these nights, as a refresher.

It will be interesting to have a more current romantic comedy in the Collection, as most of the recent releases have been pretty grim and serious (see: Antichrist).

With the 15th just around the corner, we’re due for some incredible releases this October, likely to be Hausu, Antichrist, along with the Seven Samurai and Videodrome Blu-rays, and other surprises that Criterion has not let out of the bag just quite yet.

Written By
Ryan Gallagher
More from Ryan Gallagher
An incredible restoration for one of France's largest productions will be touring...
Read More