After the war between HD-DVD and Blu-ray ended, the folks at Warner Bros initiated a program that allowed the HD-DVD customers the opportunity to trade their discs for Blu-rays. Last November, WB created a similar program allowing their DVD customers to trade up their existing Warner DVDs to Blu-rays, at discounted prices.

Over the past year Warner has expanded their Blu-ray titles that were available to trade in for, and today they announced a rather revolutionary step in this transition to Blu-ray. They will now allow you to send in any DVD, and trade it for one of their (Warner Bros) Blu-rays. It’s not exactly a straight trade, as you’ll end up paying $4.95 and up for the Blu-rays that you’re looking for, along with a flat shipping fee for your shopping cart. Basically, you build a shopping cart with the Blu-rays that you’re interested in, mail WB the DVDs you’re trading in (they don’t have to be the corresponding discs), and in 3-4 weeks you’ll get your new Blu-rays.

Here’s how it works:

I had to re-read the press release a few times before the weight of this change in policy really sank in. They weren’t really letting me trade in ANY DVD in my collection, for one of their Blu-rays, were they? Yes, they are. I’ll include a link to DVD2Blu.com where you can read all of the rules, to see that this is serious.

Is this an attempt to help bolster the Blu-ray market this holiday season? Maybe if you start getting rid of your DVDs, and building your collection, it will snowball? Are the guys at Warner Bros just being unusually generous in this current economic climate? Could this just be a way for Warner Bros to unload their excess inventory of Blu-rays that are sitting in a warehouse somewhere? I have a feeling it’s probably a combination of those options.

Up until recently, Criterion offered a $20 upgrade option, if you wanted to trade in your DVDs for their equivalent Blu-rays. Criterion previously had referenced the program on their Help page, but it has mysteriously disappeared. After digging around on the various forums, I found this post from “CCfixx” on Blu-ray.com’s forum about   Criterion quietly phasing out their program:

Earlier in the week, I contacted Jon Mulvaney to see if it’s possible to upgrade the 3-disc “Seven Samurai” DVD to the 2-disc blu-ray… packaging and all.

This is his response today…

I can’t say that I’m all that surprised at this piece of news, simply because it was a little too cost prohibitive. What with a 50% off Barnes and Noble sale looming on the very near horizon, you’ll be able to pick up Blu-rays at $20, without having to give up your DVD originals.

What do you think about this new option for Warner’s DVD2Blu program? Will you be trading any in? Are you sad to see the Criterion upgrade option quietly fade into the night? Leave your thoughts in the comments below. 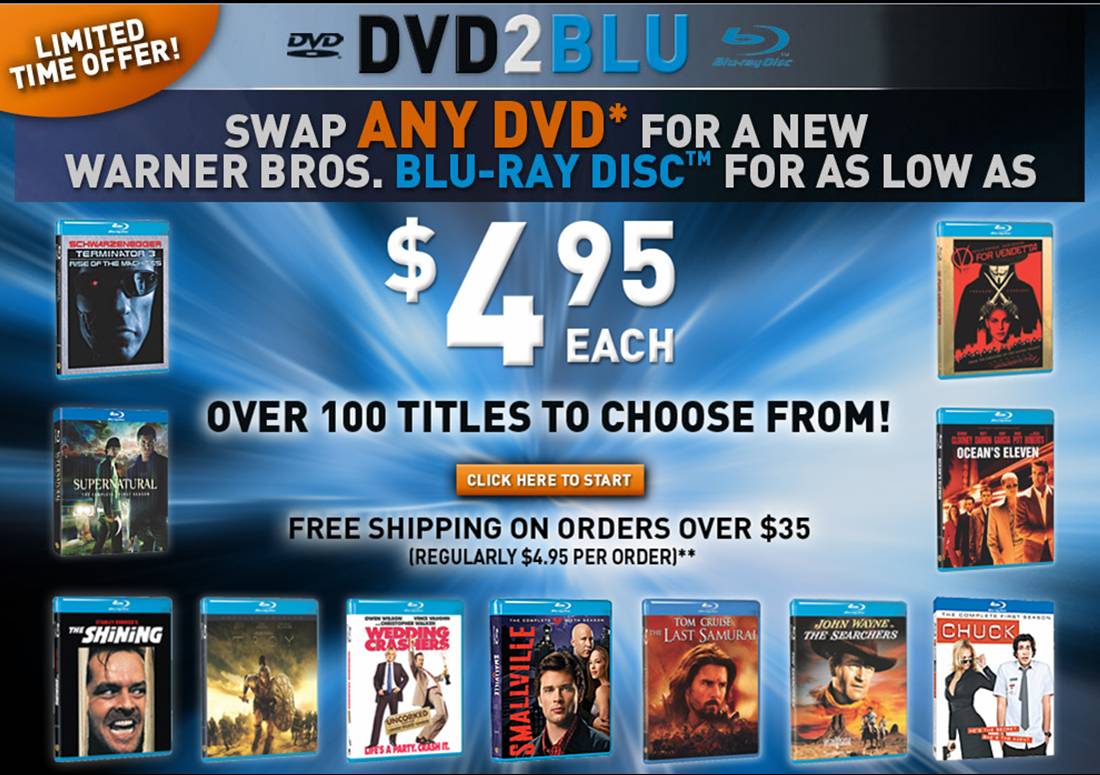