[Note from the editor: Full disclosure, the CriterionCast (podcast only) is now being sponsored by the Warner Archive. Their sponsorship does not involve our website, or our reviews of their DVD releases.]

Sometimes in history, a film has all the elements of a fever dream. A writer you love from a specific genre doing a sex comedy, mix in some Rock Hudson, sprinkle some Angie Dickenson and shake up with a bit of Telly Savalas. Pour it on a serial killer subplot and directed by a sexually charged director and you have something along the lines of Pretty Maids all in a row, the 1971 film that Warner Archive has put out recently with their new Remastered Collection. And it’s a film that I had only heard whispers about, nothing ever concrete. Like it was just that naughty. Or just that weird. And when I finally got to watch it, it’s a little of all of the above.

The story begins in fictional Oceanfront High School at the height of the sexual revolution. Ponce De Leon Harper (the underrated John David Carson) is a bit intimidated by all the beautiful women around him, be it his classmates or his new substitute teacher, Betty Smith (Angie Dickenson). He of course goes to the most trusted of faculty in the school, Michael “Tiger” McDrew (Rock Hudson), the high school football coach and the student’s guidance counselor. Just don’t bother him when his “Testing in Progress” light is beaming. He might be having a sexual encounter with a beautiful student of his.

Ponce goes to the bathroom to excuse his sexual problem when he stumbles upon a dead beautiful girl, slumped over in the stall. This is where the serial killer plot comes into play, and somehow it doesn’t confuse the viewer at all. Instead we get a gung-ho captain of the police, Captain Sam Surcher (Telly Savalas, without trademark lolly pop) and his partner Follo (James Doohan, who any Roddenberry fan knows as Scotty from the original Star Trek crew). They’re trying to get to the bottom of things, but the case isn’t so cut and dry. Could it be the new substitute teacher? Maybe Ponce himself? Or the debonair guidance counselor with a penchant for young girls?

The outcome isn’t really that important in this film. What becomes important is the sexual liberation story being told, the performances within the film holding the darkly comic tale from being too over the top. Everyone seems to be liberated in the film, not just sexually, but as actors, being able to give and take with one another. It’s definitely a time capsule of a film. Not because it’s dated but because of the dynamic of the sex romp story that one isn’t so used to in film today. One wishes Vadim had stuck with the mystery aspect a bit more, to mix it up a bit.

But it’s an enjoyable 92 minute romp and one can do worse with entertainment. The film might be looked upon as sexist drivel, considering every female character is just there to be desired and some of which are ultimately killed. It’s a bit on the fetishizing side, but what else is there to expect from Vadim? The director of films such as And God Created Woman, Spirits of the Dead and Barbarella, he always put the lens on beautiful women and shows the audience their specific “assets”. It feels very European, and this being Vadim’s first American film might be a bit of a crutch for the film maker.

Luckily for him, the film has some fantastic characters, and Hudson’s “Tiger” steals the show as the sexually triumphant guidance counselor. It’s amazing how suave this man can be and with big mustache in tow, he sheds that wholesome image people were used to from his films with Doris Day and yet is still the same charismatic actor he always was. He just tweaked it a bit. The other noteworthy performances are between Angie Dickenson and John David Carson, lovers that shouldn’t be (and would be caught in a scandal if this would to happen in today’s climate). Their romance is awkward, slow paced, confusing, sexual and more or less what you would actually expect from a relationship between teacher and student.

A big thank you has to go out to the Warner Archive for not only releasing this film to the public, but also to remaster it, giving it the extra love and care it rightly deserves. Not the same love and care “Tiger” would give to his students, but the print of the film is above average. As I said above, the film is a snapshot of a time long ago, not forgotten but never matched again. The sexual revolution was booming and Pretty Maids all in a row shows us a little glimpse at this time. It’s definitely worth it to pick it up and see a film that has been sorely overlooked. 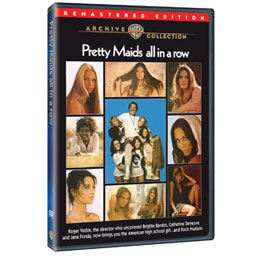 Written and produced by post-Star Trek Gene Roddenberry, and directed by Roger Vadim (Barbarella), Pretty Maids All in a Row is an outrageous, head spinning, flower-powered dark comedy/sex comedy/murder mystery that could only be produced in a decade like the 70s.

Playing a randy football coach, Rock Hudson headlines a top cast that includes Angie Dickinson as a sexy substitute teacher and Telly Savalas as a savvy homicide cop -sans lollipop. Sci-fi fans should look for appearances by Roddy McDowall (Planet of the Apes) as the High School Principal, and James Doohan (“Scotty” from Star Trek) as a State Trooper. If that’s not enough, imagine the film’s opening soundtrack featuring Chilly Winds, a song by the Osmonds. With everybody doin’ it in this whodunit, Pretty Maids all in a Row needs to be seen to be believed.