When I was a kid and I saw Gamera Vs. Barugon for the first time, I was a bit confused. Not by the film itself, but I had to ask my uncle if this Barugon was the same as the Baragon that battled rival Godzilla. My uncle looked at me, smiled and said some words that still stick with me to this day. He said, ‘You know way too much about films. You’ve learned well and will probably surpass me soon enough.’ Cut to 20 some odd years later and I’m giving my uncle tips on which films he needs to check out. So when I told him I was reviewing Gamera Vs. Barugon, the second film in the classic Gamera series, he patted me on the shoulder and said he couldn’t wait to read it.

On to the review at hand, Barugon is a great creature for Gamera to battle. A monster with ice that shoots from his tongue and a rainbow from his back, it’s a weird combination that somehow works. But wait, how is Gamera still around? Wasn’t he on a rocket, being sent to his demise in space? He was, but the opening sequence in this film is a sight to behold, his escape and plummet back to Earth and his thirst for energy, which he takes from the Kobe Dam. The miniatures used are wondrous, and just make you appreciate the time and care they put into these films. Gamera has a slightly meaner and sleeker look as well, which makes him more terrifying and gives us an intense 40 or so minutes until Mr. Barugon shows up to battle.

Koji Fujiyama is the human star, Onodera, who is a ruthless bastard in search of a prized opal in New Guinea. He’ll get it at any cost, letting one of his colleagues die from a scorpion sting, punches women without any remorse, tries to kill another ‘friend’ with grenades, burns a crippled man alive (which beforhand he crushed him with steel lockers and unleashes Barugon on the public. Yes, the opal he was searching for is Barugon’s egg and he doesn’t even care. He even tries to steal the diamond which lures Barugon into what could be a watery grave for him.

Onodera doesn’t have any qualms with being one of the most loathsome people on screen and that’s what sets this film apart from other Japanese monster movies. Usually you just care about the monster battles, but in this film you just can’t wait to see what this guy is going to do next, and that’s mainly due to Fujiyama’s portrayal and the script by Nisan Takahashi (who would continue on as writer of all of Showa’s Gamera films).

It also works due to the use of color photography, used to great detail when the battles are occuring on screen. They went through all the stops, with a widescreen display that should be seen by anyone deciding on doing a kaiju film of any sort. This is the first time since theaters (showing the film as War of the Monsters in the U.S.), Shout! Factory has done an amazing job with this presentation of the film. They’ve cleaned up the film as much as they possibly could, making this the prettiest Gamera I’ve ever seen. And seeing the film with the proper language and translated subtitles might seem miniscule to some, but to a kaiju purist like myself and lover of foreign films, I like to see a film in its original intended format.

They also include an informative commentary track with August Ragone, who did the first Gamera release as well and is now joined by fellow fan and translator Jason Varney. It tends to be more straight forward, showcasing each of the actors and various other crew throughout the film, which is all you can really ask with a commentary track like this. You also get some behind the scenes photos, promotional materials, a Japanese movie program and a great little booklet with thoughts from fellow co-star Kojiro Hongo, from a previous Gamera picture book. 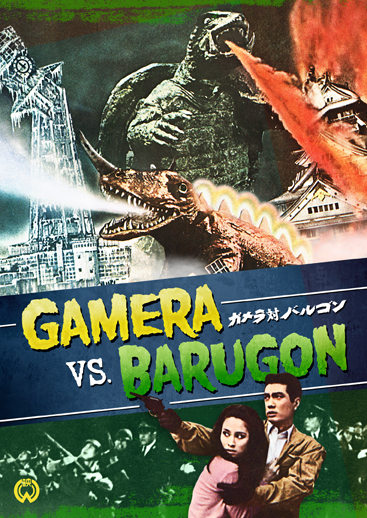 When a meteorite crashes into the rocket transporting Gamera back to his home in outer space, the defeated monster escapes and returns to Japan. Not a moment too soon, either, since a band of thieves has inadvertently unleashed the giant lizard Barugon onto civilization. The two monsters battle, and with the help of the Japanese military, Gamera is eventually able to defeat Barugon and save Earth from certain destruction.