Let’s go back to the 1980’s. Ronald Reagan was president. Our economy was in the shitter. AIDS was making news as a real threat to society. And the slasher film was making tons of money in the box office and at home with a new fangled contraption called a VHS player. Halloween. Friday the 13th. Nightmare on Elm Street. Those are but a few names that get thrown around when people speak about the slasher genre. But one series that tends to get forgotten or mixed up in the mess is The Slumber Party Massacre Trilogy. And that’s a sad fact, considering these films are loved by many horror fans and thanks to Shout! Factory, they are newly remastered and available for the world to buy now. But do they still match up to their brethren in the genre?

In 1982, Roger Corman wanted to cash in on the slasher craze, but as opposed to the majority of those films, which many would say were misogynistic, Corman did the unthinkable and let Amy Holden, a woman, direct from a script that she had read in Corman’s archives from renowned feminist activist Rita Mae Brown (Rubyfruit Jungle) and the rest is, as they say, history. The first Slumber Party Massacre film is a twist of the usual formula when it comes to slasher films. As opposed to the women being weak and the men being the strong force, it’s switched up and is primarily about a man forcing himself on an innocent woman. The drill the killer uses is supposed to be a penis and this is seen throughout the series, in still photos and especially in the cover art for the films.

But what about the films? The first deals with Trish Devereaux (Michele Michaels) who is having a slumber party and decides to invite the new girl, Valerie Bates (Robin Stille), even though there is tension between her friends and Valeries, due to her being better at basketball. Ahh, high school memories. So Valerie decides to stay home for the night. As the slumber party is going on (conveniently across the street), and as Trish and friends are having a good time, the killer comes into play. Russ Thorn is his name and the movie makes sure to let you know this, with newspaper articles and radio broadcasts speaking of his escape and his murder spree that landed him there. He’s decided to continue it in a gruesome sort of way, power tools and all.

I’m not going to go into detail of the murders (which are fun) or the acting (which is above average for a slasher flick) but one has to look at this film on different levels. As a slasher film, it’s a cut above the rest (pardon the pun) but as a horror film it’s a good time. Better still is looking at it as almost a precursor to the Scream films. A tongue in cheek look at the whole slasher genre, and a fun one at that. You like the characters in it and actually want them to fight off the psycho killer, who has a silent intensity, who thinks he truly loves these girls.

The Slumber Party Massacre II is next and in no way is a wonderful film. It’s a fun film that has a great over the top killer, but it suffers from the onslaught of Freddy Krueger copycats that were in horror films at that time. The year was 1987, and if you didn’t have a wisecracking killer, then your film must be rather boring. This killer though quotes songs, haunts Courtney Bates (Crystal Bernard of Wings fame), sister to Valerie Bates from the first one and is suffering from horrible dreams that are replaying the events she saw from the first film. And our killer, looks like he has come from a James Dean film, has a rather unique weapon.

This film was written and directed by Deborah Brock, the second woman Roger Corman had used in the series (and not the last) and this film is much more tame when it comes to the nudity but not with the gore factor. A zit on your face will never be forgotten and a drill coming out of a guitar is a rather unique weapon of choice. He can play a mean tune and then impale you with it. The thing I like (and many don’t) about this film is the way it never tells you if the whole thing is a dream or not. Watching it again, after so many years, I’m still not sure. But I do know I need to find the soundtrack somewhere, asap.

The third one went a darker route, especially since the year was 1990 and the slasher boom had definitely quieted down. It’s a much harsher look at the genre and has some awesome kills, but suffers from poor acting. It has a good twist within and some people mistake it for a remake of the first, which I definitely don’t see. A group of boyfriends go to scare their girlfriends at the beach house, but of course there’s a killer on the loose. Is it the weird guy from the beach that watched them play volleyball? It’s worth a watch to find out and to see some sadistic kills. Also another film directed by a woman (Sally Mattison) and written by one too (Catherine Cyran).

Shout! Factory again brings a wonderful DVD set, and this time they definitely didn’t skimp on anything. All three films are remastered (there is wear and tear, but if any films should have it, it’s these types of horror films) and each film has a commentary track on them. You also get theatrical trailers, photo and poster galleries, an essay written by journalist Jason Paul Collum and best of all, a brand new hour long documentary about the trilogy, Sleepless Nights: Revisiting The Slumber Party Massacres. It sits down with directors, actors, makeup and various other people who made these films. It’s a great inside look at these films, and thanks to Shout! Factory, this series gets the love it deserves. Definitely recommended for your horror needs. 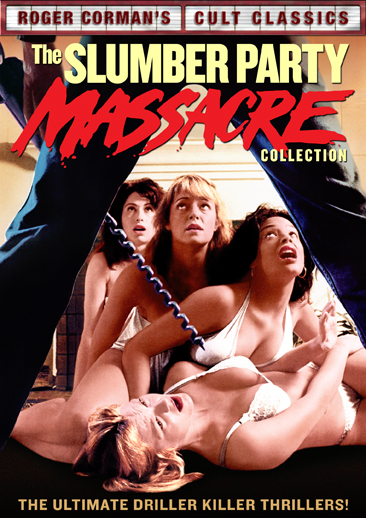 All three films in one Complete Collection for the first time! This 2-disc Special Edition features new DVD extras including an in-depth, 3-part Documentary revisiting all films.

The ultimate driller-killer-thrillers are back!! In the terrifying original Slumber Party Massacre, a high school girl’s basketball team is stalked by an escaped mental patient with a portable drill. In Part 2, the killer returns this time as a physical manifestation of a young girl’s nightmares, slaying more teens in the guise of an evil rocker with a deadly guitar. And in Part 3, a new group of teenagers decide to have a slumber party when yet another unknown killer with a power drill begins attacking them.