When thinking of classic B-movies, the conversation must start and stop with not only Roger Corman, but the seminal sci-fi cult masterpiece, Death Race 2000.

Not only has the film become fodder for a rather turgid Paul W.S. Anderson (and I stress the W.S., not Thomas, there is indeed a massive difference) remake, and a recently announced direct to DVD sequel, but it has seemingly been lost to history, as outside of the film world, its name isn’t quite as well known as it damn well should be.

However, Shout Factory, with their new release of the film, is looking to change all of that. For the most part, they definitely succeed, as this is an interesting, albeit a mixed bag, DVD.

Personally, this is one of my all-time favorite films. It’s not in my ‘top 10’ or anything like that, but if I want to sit down, and watch a film that is both eminently watchable, as well as quite thematically interesting, this is one of my go to films. It features a rather impressive cast, headlined by the likes of Sylvester Stallone and the late David Carradine, as two racers thrust into a cross country competition, where the point is to not only win, but take out as many people as you can in the process. It’s campy as all hell, and it’s one of the most enjoyable times you’ll have in front of your TV. Both Carradine and Stallone are great here, in their own, cartoonish way, but the real star of the film has to be the themes behind it.

The film has a rather full plate it tries to dig into. It looks at the idea of violence as entertainment, and the then state of American politics, which in its own interesting way, is just as relevant today as it was 35 years ago. It’s a thematically full film, that while working on a completely entertainment level, has quite a lot behind it for those who are willing to dig a little deeper than just the superficial, gore hound feast that it can be.

That said, one of the more disappointing aspects of the film has been its lack of a worthwhile DVD/Blu-ray release. Sure, the film has been on DVD for quite some time, but for a film so perfect for its time, it hasn’t seen its glory really put to plastic. Not until now at least.

With the new Shout Factory DVD, comes a much needed release, completely worth the name of Death Race 2000. It comes as part of the Roger Corman Cult Classics Collection, and the Paul Bertel directed film is one of the more impressive parts of the collection. To me, the star of this DVD has to be its impressive duo of commentaries.

Two commentaries are included on the disc, bringing the one from the previous release, featuring star Mary Wornov and Corman himself, as well as a really interesting one with assistant director Lewis Teague and editor Tina Hirsch. As with a lot of commentaries, the second one features a lot of dead air, something I never like to see, but for those who love the film enough to pick this release up, it’s definitely a must listen.

Now, as we go into the film’s special features, we get into some rather rough spots, as this isn’t quite as full as one would hope. Some of the rough spots come in the form of an all too brief interview between Corman and Leonard Maltin, that while interesting for what we get, doesn’t quite get as deep as one looking for a complete release, would hope. There is a longer, 10 minute retrospective, but even there, it’s spent discussing things that are far too well known to be really worth a watch. However, not is all lost with this DVD.

Personally, I found myself more than compelled by a lot of these features, particularly three short featuretes looking at the car design involved in crafting the film, the costume design, as well as a longer feature on the writer of the film’s original story, Ib Melchior. All three of these are a bit too short for my taste, but for what we did actually get, they are quite interesting. Throw in a ton of promotional material, photos, and even a trailer with audio commentary by John Landis, and you have the essential release of this cult classic.

Overall, the film looks and sounds utterly fantastic, as one would expect here, making this a film that looks like it could have been released just this afternoon. While there are aspects of the release that are a bit underwhelming, I can’t help but completely recommend this release to any and every film lover out there. Yes, it has a few dull moments, but this is overall a fantastic release with compelling features and one hell of a transfer. Definitely pick this one up.

Special Features include (from press release):

· David on Death Race: A brief look back from star David Carradine recorded in 2008

· Ready to Wear: In-depth interview costume designer Jane Ruhm on her inventive work for this film and other Roger Corman classics

· Start Your Engine!: How the world of Death Race 2000 came to life, interview with original story creator Ib Melchior

· Killer Score: An all-new interview with composer Paul Chihara on the creation of the film’s eclectic score, which was also his first feature film composition. 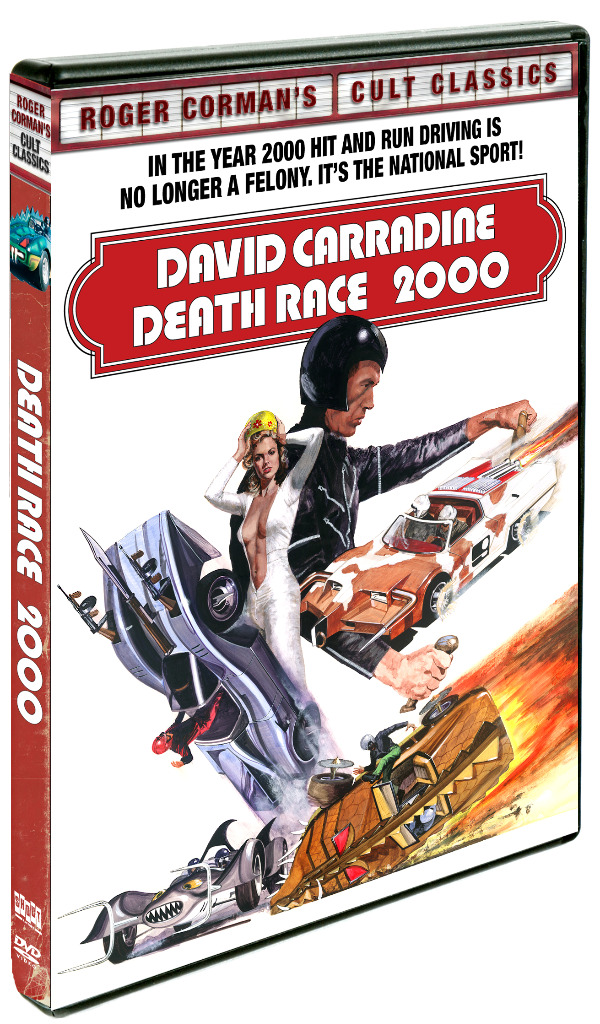