Usually, Criterion sends out their e-mail newsletter with their wacky drawing somewhere around the first week of the month, with their new release announcement always falling on or around the 15th. Over the past few days they’ve done their customary “still time to sign up for the newsletter” tweets and Facebook posts, which meant that one was in the works, and they didn’t disappoint!

This is what we got in the newsletter, a bag of flour, in a bucket: 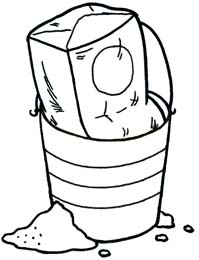 Now, I was prepared to write a rousing explanation, as to why I thought this clearly meant we were going to see a Criterion release of Roger Corman’s 1959 film, A Bucket Of Blood. I was going to describe how the bag of flour was really a bag of clay, similar to that which the artist of the film uses to cover his victims. Then a friend from one of the forums threw a nice cold glass of water all over that idea.

Back in October, Masahiro Shinoda went to visit the Criterion offices, and they posted a video of it over on Facebook:

Shinoda was in New York as there was a collection of his films playing at the Lincoln Center, including a brand new print of his 1964 film, Pale Flower. Get it? Pail flour? Oh Jason Polan, you kill me.

From the NYFF description of Pale Flower:

Shinoda’s dazzling breakthrough film follows a gangster (Ikebe Ryo) who gets released from jail, only to find his old yakuza gang merged with their former rivals. Disillusioned and without allies, he becomes drawn to a gambler (Mariko Kaga) and resolves to commit murder for her viewing pleasure.

As influenced by the Nouvelle Vague as the popular Japanese yakuza genre, Shinoda crafts a visually stunning and unapologetically nihilistic vision of the underworld and its inhabitants, with a memorable use of music by Purcell.

‘The daily life of an assassin interests me more than the assassination. The routine of coming home and daydreaming or sitting still and thinking about what you’ll do next is what I wanted to capture.’ ‘”Masahiro Shinoda

For some screenshots of a past DVD, and some really interesting descriptions of why this film is so important, I’d head over to Sarudama.com. My favorite part of their review:

I had also completely forgotten that I had mentioned this as a rumored new release last month, when I was working through the rumored titles, to figure out what was going to be announced in February of 2011.

What do you think of Pale Flower heading into the Criterion Collection? What other Shinoda works would you like to see Criterion take on after this one? Would you rather this be Corman’s Bucket Of Blood? Leave your thoughts in the comments below.