Earlier this morning, Criterion decided to drop another “wacky” animal drawing in their e-mail newsletter. An owl with headphones? What could it mean? Let’s have a look: 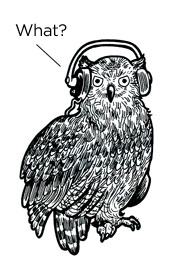 In 1981, Brian De Palma released his thriller, Blow Out, starring John Travolta as a film sound recorder, caught up in a muder mystery. The film was recently available on DVD through MGM, and is now out of print. As we all know, Criterion has been picking up several titles from MGM, and releasing them in new, restored, remastered, with incredible supplements. In a few weeks we’ll finally get the long rumored Criterion edition of Night of the Hunter, which was once an MGM DVD.

The owl in the illustration is from the opening of the film, as Travolta’s character is recording sounds in the night. Check out the trailer below to see this in action.

As with most of these wacky newsletter drawings, it’s hard to get an idea as to when this title might be released, but it’s safe to say that we’ll get it when they’re good and ready. While Cronos was a long time in between when they had teased at it with the scarab, and when we finally got the official announcement, it still made it. I’ve tried going back through the wacky newsletter drawings of the past, to see if any haven’t ever come to fruition, and I can’t seem to find any.

What do you think of Blow Out coming to the Collection? I can’t wait.

Written By
Ryan Gallagher
More from Ryan Gallagher
The team is joined by David Blakeslee to talk about their favorite...
Read More