A Journey Through the Eclipse Series: Sacha Guitry’s Désiré

Last week, I was in a bit of a quandary about what Eclipse DVD to review next for this column. I didn’t pick up any obvious leads from current events, other films watched recently, significant anniversaries of past movie releases, holidays or big ideas bubbling up through the zeitgeist. So I posted an informal poll on Twitter where I offered my followers a choice of four different films, asking them to weigh in on what they wanted to read about next. Among them was Désiré, from Eclipse Series 22: Presenting Sacha Guitry, which turned out to be the big winner, a unanimous choice actually, since our beloved editor Ryan Gallagher cast the first, deciding and only vote. I prefer to interpret that as an uncontested endorsement of his superb taste in films, rather than indicative of any disinterest on the part of those who subscribe to my tweets. Or maybe my query just got buried in the avalanche… in any case, no big deal. I enjoyed revisiting Sacha Guitry’s impeccable wit and Gallic insouciance toward respectable bourgeois mores once more, the last of the four films in that set that I’ll cover in this series. 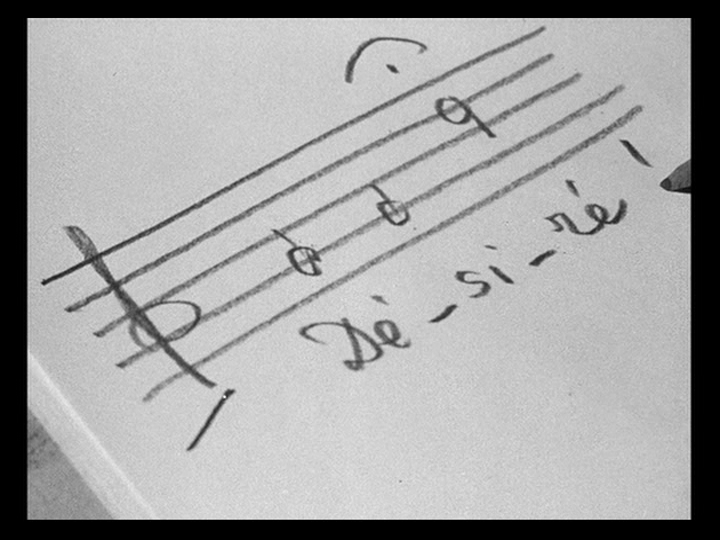 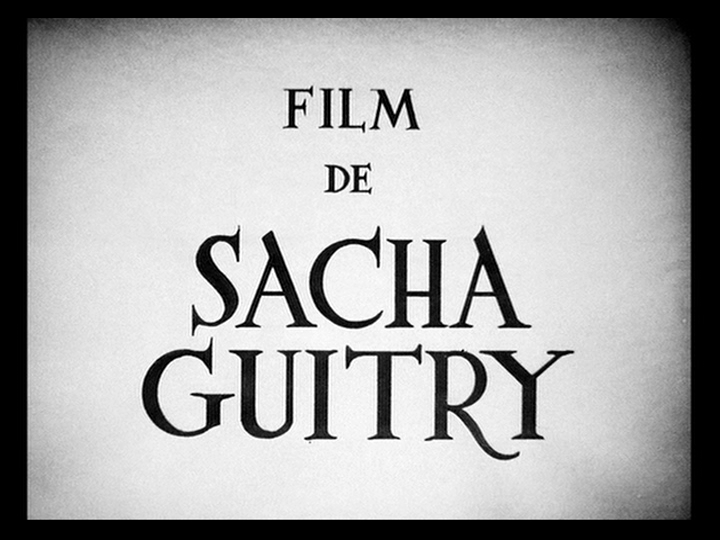 As anyone experienced with a Guitry film has come to expect,  Désiré opens with a personal flourish, as Guitry himself wields a pencil to flawlessly inscribe the musical notations and title card in bold confident strokes. He then emerges from behind a door, bows to the audience and personally welcomes us to the show that he and his company are about to put on. By this point in his career, he’d already established himself as a reliable source of entertainment, transferring his prodigious talents as playwright and stage actor to the cinematic medium where he adapted quite a few of the 120+ plays that he wrote for the screen. The four films included in this Eclipse set were released in a span of just over one year, starting with The Story of a Cheat from October 1936, The Pearls of the Crown the following May, this one, released in December 1937, and finally Quadrille in February 1938. And in between all those are three other films that didn’t make the cut! Clearly Guitry was on a phenomenal roll of creative prowess, making it all look quite easy in retrospect as his droll observations of the all-too-human peccadilloes that surrounded him (and in which he freely engaged himself) created a steady flow of amusement throughout France. 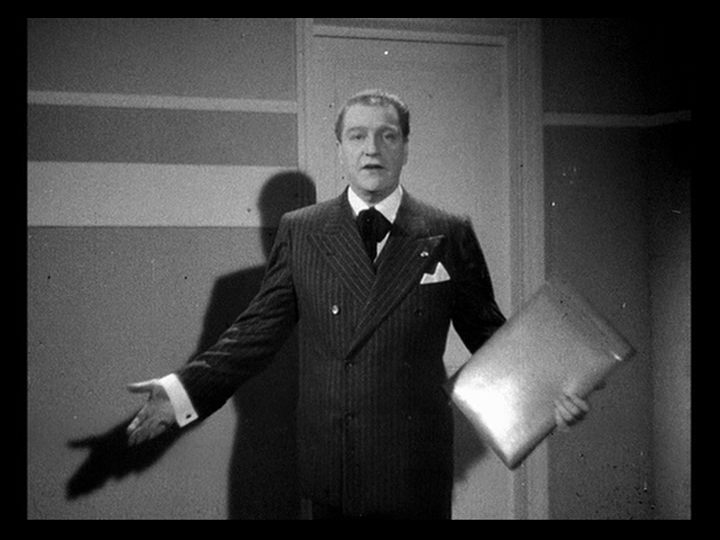 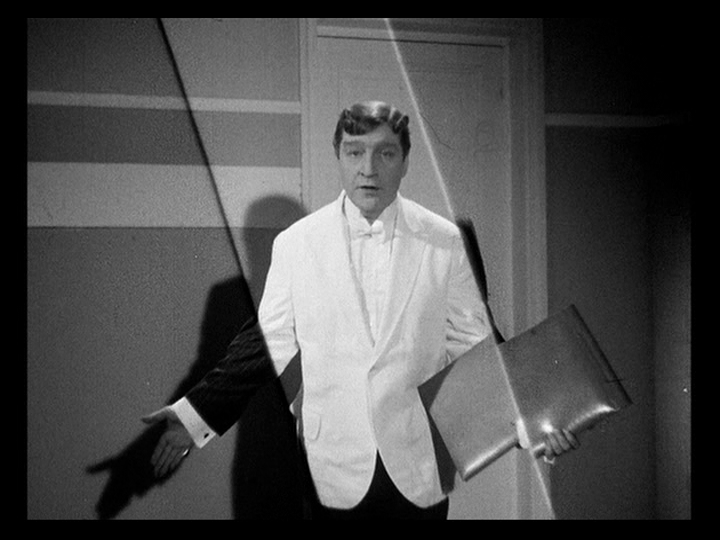 By way of comparison, it may be helpful to view  these Guitry gems alongside more familiar French classics from that era like Pepe le Moko, Port of Shadows, Le jour se leve or the Renoir masterpieces Grand Illusion, La bete humaine, and most particularly in its relationship to  Désiré, his landmark  The Rules of the Game.  Each of these films in their own way reflect the decadent path that French society had embarked upon as its well-established order of class hierarchies and attendant hypocrisies was (unknown to them) about to be challenged by the tumultuous upheavals of the Second World War. Watching these films now with just a rudimentary awareness of the history that followed makes for quite a macabre spectacle as we see aristocrats, servants and strivers of various sorts going through their whimsical parlays, oblivious to the disaster about to strike just a year or two later but giving odd glimpses here and there of recognition that they were caught up in an unsustainable status quo. 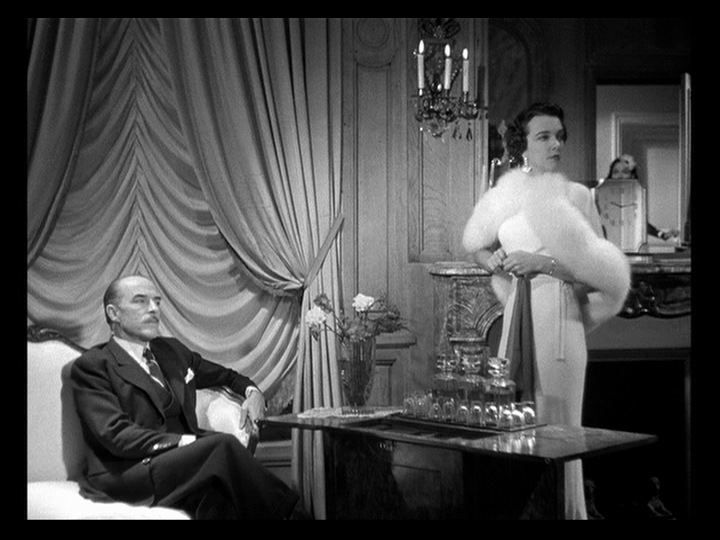 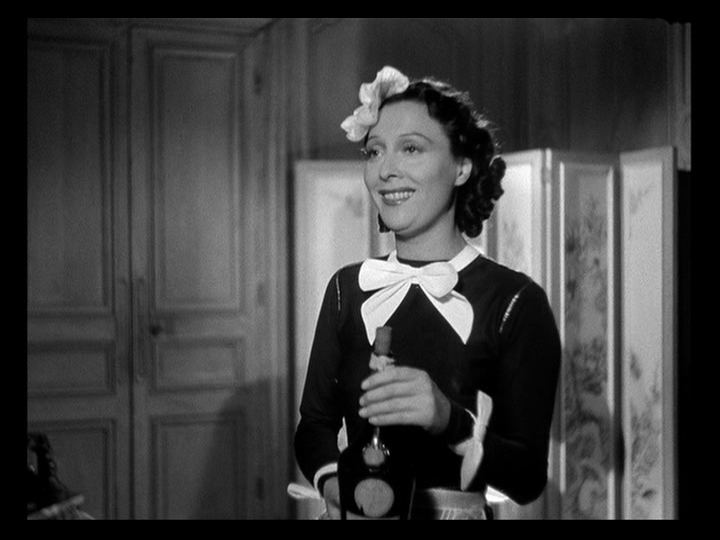 Désiré‘s plot centers on some prototypical “upstairs, downstairs” erotic shenanigans involving the affluent mistress of her household, Mlle. Odette Cléry, and her manservant valet after whom the play and film are named. My experience has led me to regard “Desiree” as a woman’s name, but I guess if you just take the extra “e” off the end, it works for guys… at least, French guys.) The clear allusion to the word “desire” is hardly coincidental, since that power of yearning, barely repressed attraction is the particular quirk of nature that Guitry focuses on here (and oh so often elsewhere, naturellement.) As an on-board fan of Downton Abbey myself, I enjoyed the pared-down efficiency and ooh-la-la twists of this little skirmish in the age-old class warfare of European civilization and I think other fans of that pop culture sensation might agree with my appraisal, even without Downton‘s fancy sets and wardrobes. 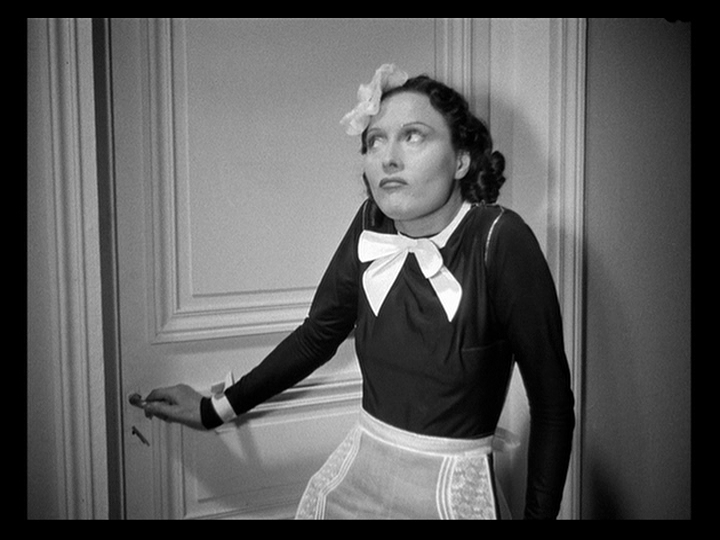 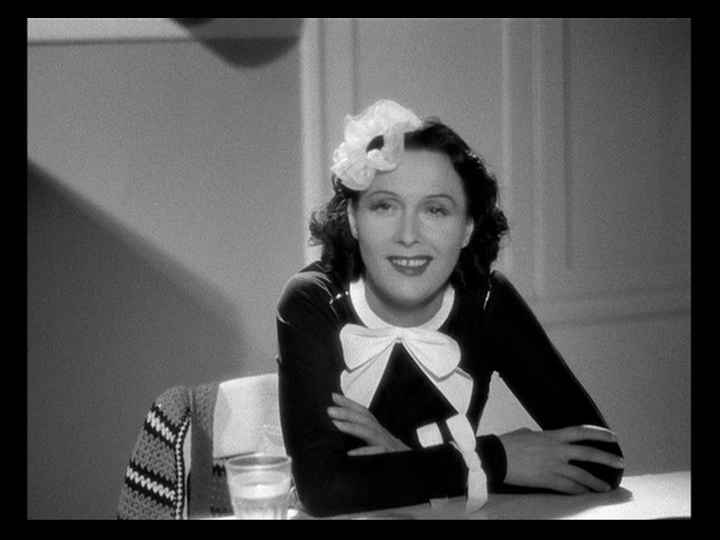 But before  Désiré himself makes his star entrance about a half hour into the film, we have the first act to get through, where we’re charmed by the inimitable Arletty, most famous for her performance as Garance in Children of Paradise. Here we get to see her in a more modern role, though she’s confined (except for one very brief dream sequence) in the customary little black dress and apron that constitutes a French chambermaid’s uniform. She’s effortlessly charming as Madeleine, fetcher of Benedictine or whatever else suits Odette’s whims, a woman who’s every bit the equal in looks, charm and intelligence as the mistress who orders her around, were it not for the unfortunate circumstances of her birth and the economic subordination that came with it. As one who’s had a lot of experience dodging the randy advances of her upper-class pursuers, Madeleine’s role in the servant staff and the story is to cast a jaded eye on the proceedings, filling the audience in on the underlying passions and self-serving motives that our main protagonists try so hard to artfully conceal. 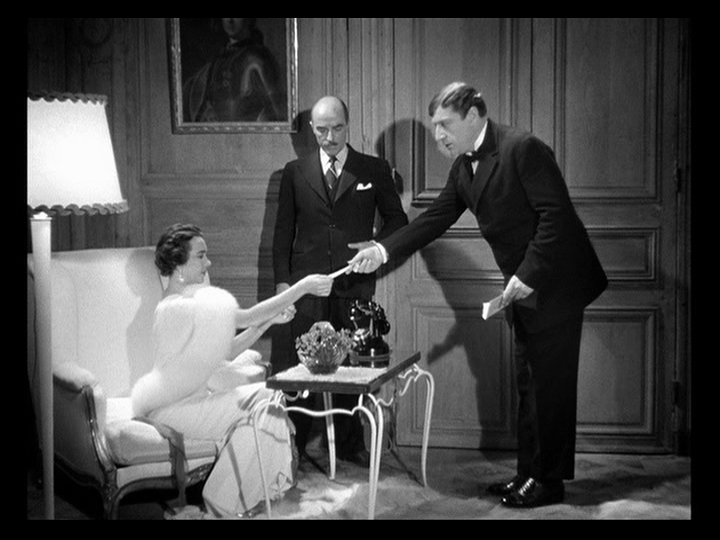 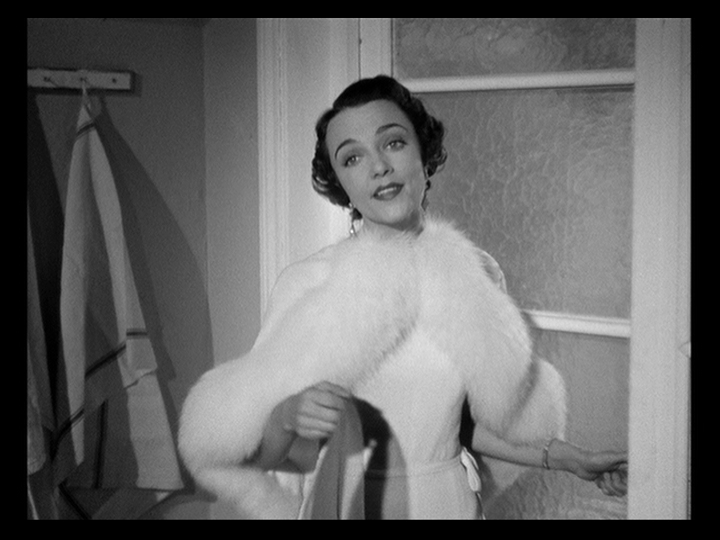 The essential conflict at the heart of Désiré  emanates from a powerfully felt (but vehemently denied) attraction that quickly establishes itself between Odette, an actress who consorts with a highly connected government official outside of marriage, and the just-hired valet who accompanies the couple and their two female servants to a summer home in the resort city of Deauville, France’s North Coast habitation of Proust and many other fashionable, wealthy patrons over the years. The professional references that  Désiré  provides lead to clues of past (actually, rather recent) indiscretions with the lady of the house who previous employed him, setting up an awkward scenario where the presumably promiscuous actress, now on the cusp of high-society respectability, has to dismiss her servant on the basis of scandalous innuendo.

The above clip, in which Odette tries but fails to part ways with her valet after  Désiré talks circles around her, doesn’t offer English subtitles, but that’s not necessarily a drawback in that it forces English-only viewers to glean meaning from the sheer music of Guitry’s melodious monologue. It’s one of several inspired rants that he delivers, including an even better one at the conclusion of the film, that are capable of astonishing listeners with their speed and precise articulation. And on the receiving end, always delightful Jacqueline Delubac, Guitry’s third wife (of five altogether) in real life, hardly seems to be acting as she absorbs and finally yields to  Désiré’s entreaties. Her job is fairly simple, to stand by looking dazzlingly adorable, loving every minute of her servant’s seductive but plausibly innocent word-spinning. And at that, she eminently succeeds. 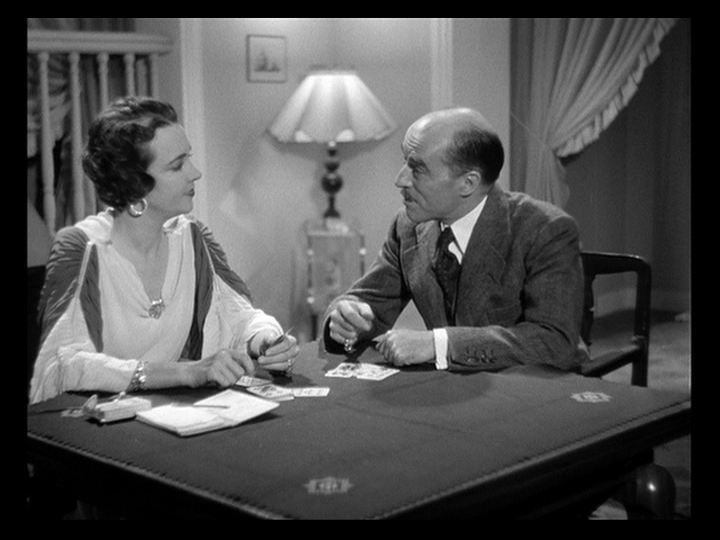 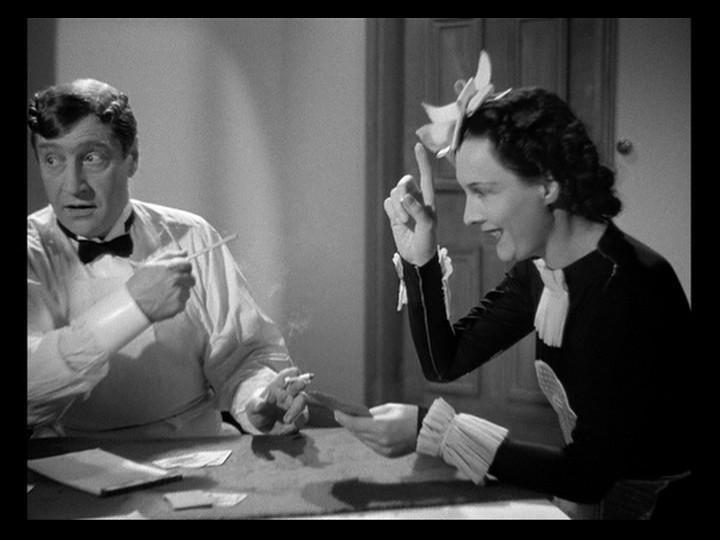 But don’t let Guitry’s theatrical turns lead to the conclusion that  Désiré is little more than a filmed stage play. Ever the experimenter in making his films, Guitry the director takes advantage of the possibilities offered by the camera, using crosscuts between Odette and her boyfriend Felix playing a game of cards and simultaneous pastimes that preoccupy the servants. A similar scene at the start, as the characters talk back and forth to each other on screen even though they’re situated in different parts of the house, exploits the same effect, drawing parallels between upper and lower classes that sharpen the satirical tone. More inventive and intriguing still is Guitry’s use of superimposed images to reveal the contents of his characters’ dreams – an unimpeded peek into what stirs them up in their sleep, after they’ve let their guard down:

Though  Désiré and Odette spend each night dreaming about illicit liaisons that both of them would dread in the bright light of day, their desires for each other remain secrets only to themselves. Their nocturnal outbursts become so frequent and noisy that they draw the attention of their respective companions, making them the punchline for a litany of smutty, smirky jokes gleefully untethered from the restrictions of the Hays Office Motion Picture Production Code. 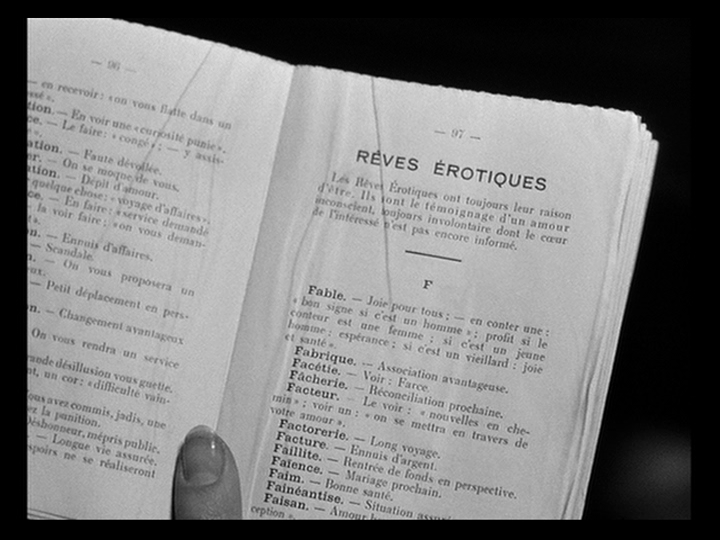 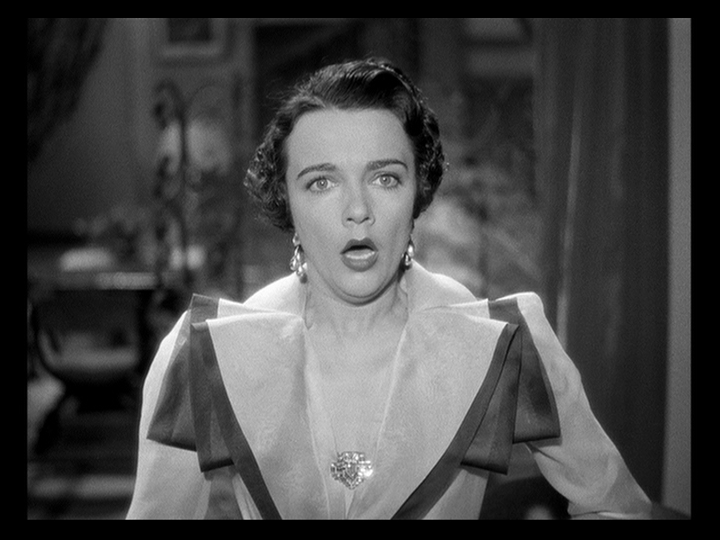 But with all the elements handily in place to have light-hearted fun with a farcical sex comedy,  Désiré  takes another unexpected turn. Guitry chooses not to exploit the most obvious angles but instead steers our attention toward the dilemmas we create within ourselves when we overthink and poorly manage our desires, or delude ourselves into thinking we can ultimately separate ourselves from the prevailing cultural order and the definitions that tradition, gender roles and socioeconomic forces impose upon us. Odette, whose background as a theatrical performer (and a mediocre, if pretty, one at that) indicates something less than a privileged and refined upbringing, comes across as a naive, confused young thing, reliant upon  Désiré to clear her head from mushy, infatuated notions that would allow her to have her cake and eat it too, so to speak. His closing monologue is a moving recital, most likely based on candid conversations he’d had with servant-class acquaintances, of the exquisite anguish that many men employed in the service of beautiful but unobtainable women have most surely felt across the centuries, surrounded by luxuries and tempted by unfulfillable passions. For members of a society like ours, where commercially-driven sexuality is so cheap and pervasive on the one hand, yet disturbingly uptight misogyny and sexual dysfunction are held up practically as virtues at the other end of the cultural spectrum, there’s some useful insight to be gained, and wry chuckles to be enjoyed, through the wizened perspective and vicarious torments experienced by Odette and  Désiré.

If you really need to watch it with subtitles,  Désiré and the other Guitry films in the set are available on Hulu Plus! 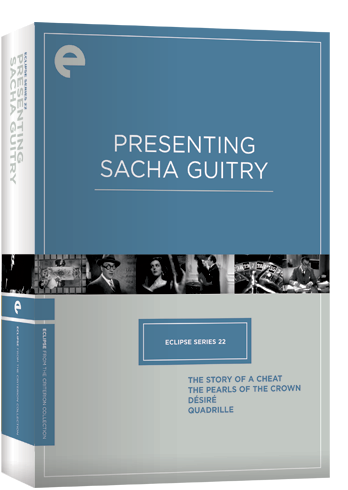 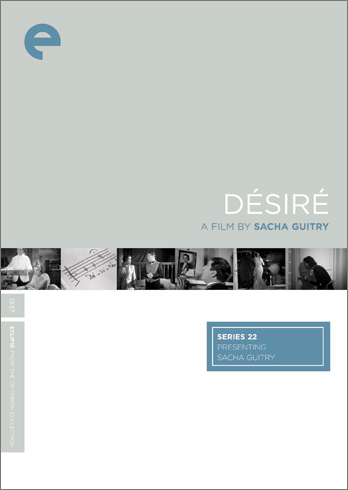