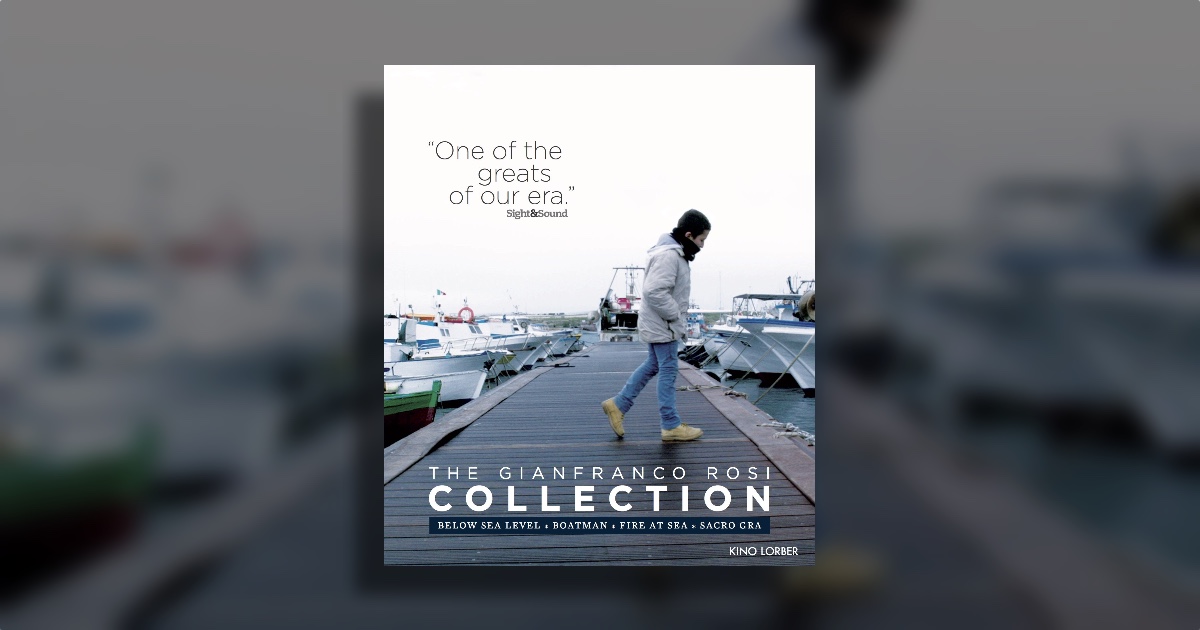 Before Oscar season late last year, the name Gianfranco Rosi meant little here in these United States. Outside of globally minded art film scenes, Rosi’s name prior to 2016 would garner mostly head scratches and quick glances at an iMDB page. However, following the release of his brilliant, Oscar nominated documentary Fire At Sea, Rosi is not just a darling of the documentary world, but a filmmaker with a growing audience anticipating what he’s offering up next.

But what about those films the masses have missed? A filmmaker with well over two decades of experience behind the camera, Rosi has seen the occasional retrospective pop up in large cities like New York City. For the most part however, his filmography is a relative blind spot for a large number of cinephiles. Thankfully, Kino Lorber has helped to change that.

The director of six films, four of Rosi’s pictures have been collected by the boutique home video/theatrical distributor and put together in a new DVD and Blu-ray box set. A director seen in global film circles as one as important as the likes of Ang Lee and Ken Loach, Rosi’s films are distinct non-fiction visions, and from his debut to his Oscar nominated 2016 release, he has cemented himself as a director of the highest order.

First in this set is the aforementioned debut, Boatman. Released in 1993, this gorgeously composed black and white feature is the briefest film in the set, at just shy of an hour in length, but it’s one of the most revelatory. Ostensibly devoid of any real narrative structure, the film finds Rosi aboard a canoe guided by the titular “Boatman” as he floats down the Ganges River. A film about life and death on the banks of this river, the film is a raw example of the type of journeys Rosi finds himself focusing on throughout his career, and is one of the director’s most spiritual and energetic documentaries. Focusing on the customs of Hindu people as they deal with the deaths of loved ones, the film is deeply moving and yet without any real structure the film also feels free and the brief digressions (be it a homeless Italian making pasta sauce or a doctor bathing in the germ-infested waters) feel of a distinct whole.

Then there is his 2008 film, Below Sea Level. Shot over five years in the California flatlands, the film follows squatters as they go about their lives living in their cars near the Mexican border. The only English-language film in this set, this is a clarifying feature for anyone with knowledge of modern non-fiction filmmaking. In an age where every other documentary has a polarizing political message or attempts to either glorify or damn a subset of society, the Italian Rosi has much more in common with a fellow Italian filmmaker doing the same type of quietly empathetic verite filmmaking. Finding some kind of aesthetic kinship with documentarian Roberto Minervini (2016’s The Other Side), both Rosi and Minervini make profound and empathetic films about journeying on the outskirts of society. Be it a group of homeless men and women living in Slab City or a drug addicted couple or a group of ex-soldier still caught in the middle of a war at home, both directors avoid casting judgment on their subjects. Instead they attempt to get to deep seeded human truths through attempting to find understanding with these men, women and children who have either left society or been left behind. It’s hard to argue against these films, these meditations on life outside of mainstream society, as being anything less than the definitive portraits of this ever polarizing generation.

However, Rosi (also like Minervini) is an expert craftsman, with the clearest example of this being the third film in the box set, 2013’s Sacro GRA. Set along the famed ring road in Rome, GRA is one of Rosi’s most formally interesting works, and yet feels entirely of his filmography. Another story about eccentrics on the outskirts of Roman society, the film is a blend of straightforward verite filmmaking punctuated by long sequences that find Rosi’s camera sitting outside of the subject’s home windows. Static, these moments are the definition of the “fly on the wall” verite aesthetic, and yet with the widows focusing our eye within its frame, they feel remarkably experimental. Toss in Rosi’s patented moments of impressionism that mark many of his final acts, and you have one of this box set’s most interesting, if slightly too long, pieces of filmmaking.

Rounding out this set is last year’s Fire At Sea. The film that truly set Rosi’s name ablaze here stateside, it’s a remarkable achievement that is as profound and of this moment as it ever could be. I wrote about the film briefly when it was part of the New York Film Festival lineup, and a revisit only cements those sentiments. A film of static tableaus, Rosi’s film is a tender one, one of deep empathy for its subjects and one assured of its message. A lament for a society on the brink of implosion, this is a subtle, quiet and in many ways experimental documentary about immigration that couldn’t be more of this moment in history.

Regarding the box set as a whole, this is one of the year’s most important, if slimmest, retrospective box sets. Along with the four films, all of which look stunning in HD (especially Boatman which sees its black and white photography really come to life), the box set comes with a couple of superlative supplements. Lacking the breadth of a Criterion Collection box set, this isn’t without some quality material, including the centerpiece which is an enlightening interview with Rosi himself. We also get a chat with Pietro Bartolo, a doctor from Lampedusa, the setting of Fire At Sea, in which he plays a primary role. There are also trailers, as well as a lengthy and engaging Q/A taken from last year’s NYFF. Toss in an essential essay on Rosi’s work from writer Nicolas Rapold, and you have one of the year’s most important box sets. It may not have the depth of a set like the pending World Cinema Project set from Criterion, but with four films of this quality and this sociological importance, it doesn’t get much better. 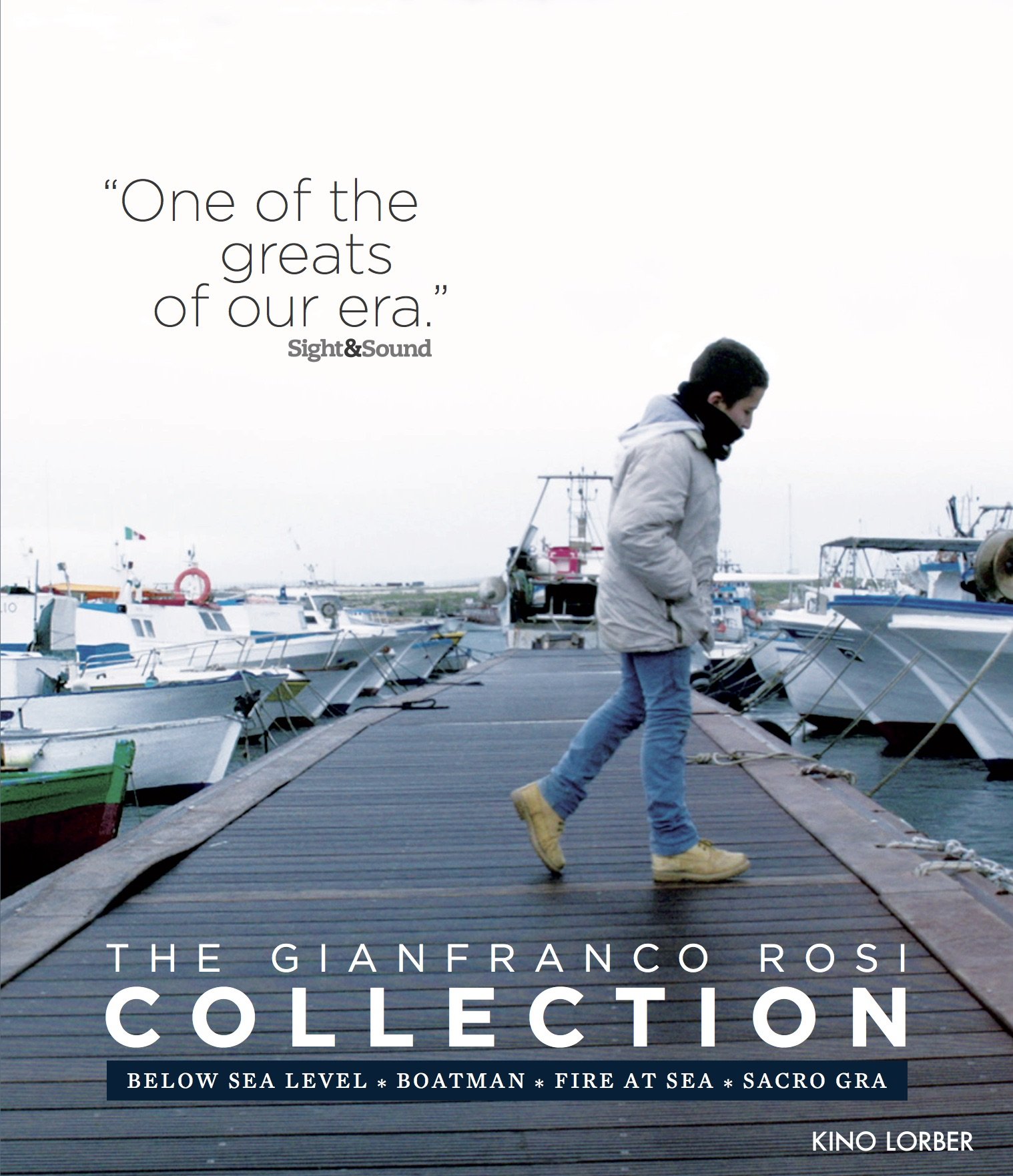