“Yes! Spartacus? Have you seen the foreign ones? Oh, so sexy.”

That conversation comes from the season two episode of Mad Men entitled “The New Girl” (which predates the great sitcom by a few years). Series protagonist Don Draper is cruising down the road with a woman he doesn’t particularly like, but with whom he’s engaging an affair, and they’re both about to be involved in a fairly damaging car wreck. Not an inappropriate time to discuss Michelangelo Antonioni’s seventh feature film, his follow-up to his much-acclaimed, now-classic L’Avventura, and a film that is itself exemplary of a certain 1960s sense of European-modernity-as-Hell that was quite pervasive at the time. In addition to Antonioni’s own work, Federico Fellini had release La Dolce Vita the year before, and Last Year at Marienbad was very much in the conversation as well. Ingmar Bergman was reaching the darkest period of his career. Even if one isn’t inclined to sympathize with Pauline Kael’s rather dismissive “Come-Dressed-As-The-Sick-Soul-of-Europe Parties” train of thought, one could at least identify that she recognized a very potent, prevalent force in world cinema. 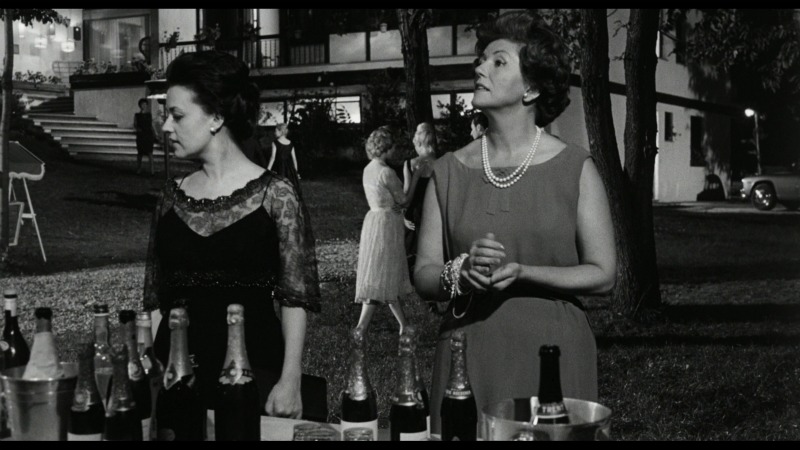 Yet, as an admirer of all the films listed above, I would not be so quick to surmise from them the almost interchangeable sameness that Kael felt, largely because I think quite a bit less of La Notte than its brethren. Don’t get me wrong, it has all the artfully-framed portraits of attractive people staring blankly at one another for which this or any other eager cinephile could hope, but, even if these filmmakers seem intent on saying the Devil is in the heart of European complacency, he still, largely, rests in the details. There’s something quite bitter about La Notte, the jabs of which are at once somewhat closer (to the belt) and more distant (Antonioni standing further from it). L’Avventura had its share of fun with the soon-to-be-ruling class, but didn’t question the anguish at the center of their souls. There’s something cheap about the suffering in La Notte, something slightly less formidable – the dissolution of a marriage is no happy topic, but given the extreme dissatisfaction both Giovanni (Marcello Mastroianni) and Lidia (Jeanne Moreau) feel for one another, not a lot that’s tragic about it, either. They long for little, and are tortured by nothing, and thus, the interior conflict that drives much of Antonioni is even more muted than his reputation might suggest.

Still, for fans of the filmmaker, there are pleasures aplenty to be found throughout, certainly in the assortment of great images, both of stillness and a flurry of motion. Once Giovanni and Lidia reach the climactic party that will ultimately spell their doom, Antonioni can hardly stand still, relatively speaking, constantly peeking around the hidden corners of the host’s mansion to find bookworms, alcoholics, fornicators, depressives, manics, and all manner of distraction-seekers. A sudden rainfall motivates some to take shelter, others to begin making love to a statue – most go for a swim, because why the hell not (although, as a side note, if you’ve ever been for a swim in the rain, you’ll know the attraction). And best of all, this section gives us Monica Vitti, who, even in her most dour roles for her director/lover, brought a certain warmth and joy to the proceedings, and she certainly does not disappoint here. A much more dynamic presence than either of the leads, she’s capable of registering at once intense pleasure and deep melancholy, a dichotomy relatively absent from Moreau and Mastroianni, as fine as they have been in other pictures. 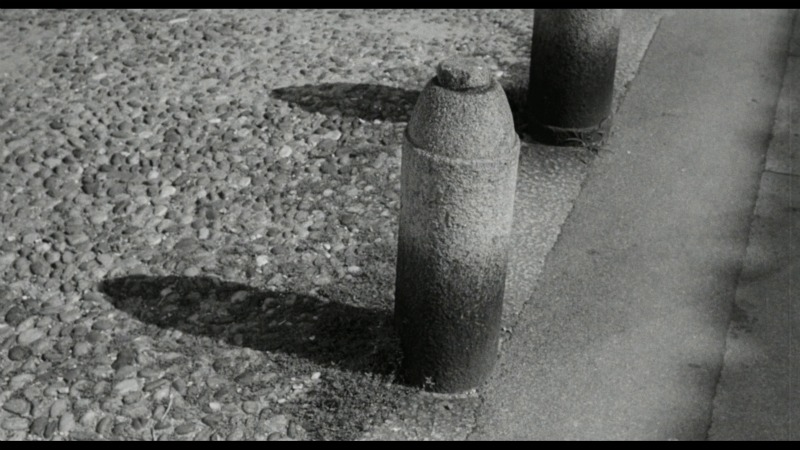 Not that the central relationship is without its affecting moments. I think especially of a brief bit in which Lidia, at an event celebrating the release of her husband’s new book, glances at a publicity photo of him on display, and pauses on it, allowing us to reflect on the vast chasm that must exist between that idealized version of him – which, we find out later, was very much present at the beginning of their relationship – and the man with who she must now live. And to be fair, Vitti’s character has much less to lose than our protagonists – her youth affords her endless mistakes – but I certainly sympathize with audiences who might feel they found a voice onscreen when she tells Giovanni and Lidia, “You’ve exhausted me, the pair of you.”

Masters of Cinema’s new (Region-B locked) Blu-ray edition is something of a mixed bag, and the quality often varies from scene to scene, even shot to shot. The print they utilized clearly underwent a lot of work to clean it up, even if the occasional hair remains in the frame (something of a familiar presence across Antonioni’s work on digital formats, oddly), and the contrast is retained beautifully. Detail, however, suffers somewhat as the film looks a little over-compressed, often looking very digital-y, and most of the film has a (very slight) green tint to it. It’s not a bad transfer, as such, but it is considerably below what we would expect from MoC bringing Antonioni to Blu-ray. 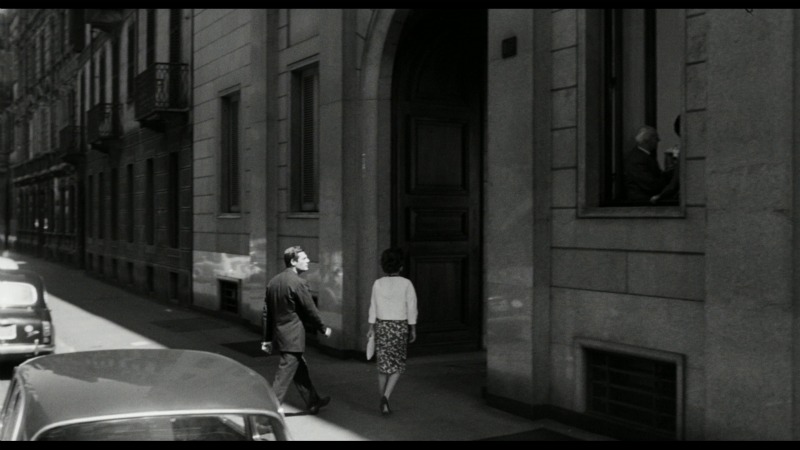 There are no special features on the disc itself, but the 56-page booklet really is something to contend with. Film scholar Brad Stevens, who contributed so wonderfully to MoC’s Tabu release, here offers an essay that’s significantly less convincing. He spends the majority of his space defending the film and Antonioni’s reputation, which is already a questionable place to start, compounded by his goal to elucidate the filmmaker’s many virtues by comparing him to even more obscure artists. Worthy though the comparisons often are, what reads like an attempt to help ease viewers into a difficult director comes across instead as distancing. Much better is a long section that allows Antonioni to speak for himself, using a transcript of a Q&A session at an Italian film school. While no director should be allowed the final word on how to interpret their films, Antonioni is wonderfully insightful in approaching his process, and this section is delightfully illuminating.

Unfortunately, this is a difficult release to recommend wholeheartedly, especially with Criterion about to release their own with a reportedly better transfer and more supplements. If you can only play Region B discs, this is a perfectly acceptable version of a film I know many have been eager to see and own, so don’t take this as discouragement, either, but if you have the freedom of choice, it might be best to explore those.