The symbiotic relationship between theatre and film will never reach a point beyond consideration. Films from this past year alone as varied as Anna Karenina, Les Miserables, Mirror Mirror, and Cloud Atlas have asked us to engage with degrees of artificiality that are sometimes forcefully confronted, other times backgrounded in purposeful ways. Teinosuke Kinugas’s Gate of Hell owes much to a theatrical tradition both Eastern and Western, yet due in no small part to its gorgeous Technicolor cinematography, it remains an intensely cinematic experience. Long unavailable on DVD, Masters of Cinema’s new Blu-ray more than makes up for that oversight.

Gate of Hell was actually adapted from a stage play by Kan Kikuchi, though one would hardly know it from the first quarter of the film, which opens on a huge battle scene that traverses several locations and a whole cast of characters who, it turns out, will largely have little bearing on much of the story to come. We gradually settle on a shogun who needs to transport his sister to safe premises, so he employs a lady of the court, Kesa (Machiko Kyo), to act as her decoy and a “minor samurai,” Morito (Kazuo Hasegawa), to act as her escort. The plan goes off without a hitch, but in the process, Morito becomes enamored with Kesa, and, when offered a reward by the shogun, asks him to arrange their marriage, a simple enough request if not for the fact that Kesa is already married, and to a senior samurai at that. 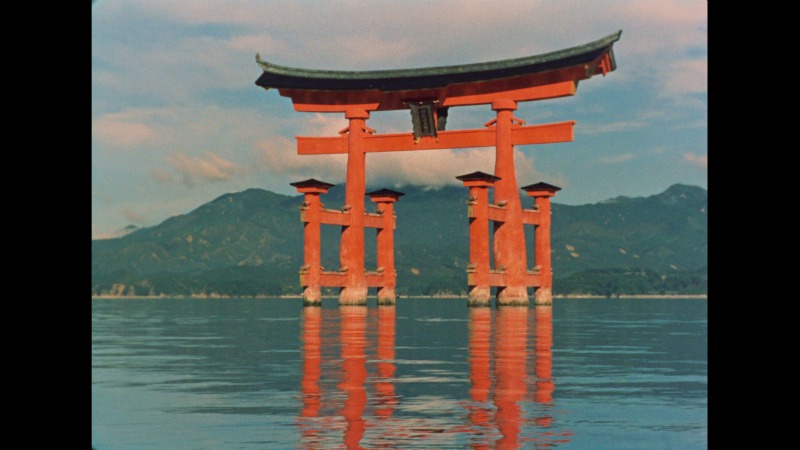 The impossibility of fulfilling his desire only enrages him, though, and he quickly tries to win Kesa over in an almost animalistic pursuit. Her husband, Wataru (Isao Yamagata), could not be more different – the very model of of elegance and goodwill, he also possesses none of the passion that drives Morito, and while it’d be wrong to say she’s torn in any demonstrable way between the two, the state of her own desires are, indeed, uncertain, perhaps even to herself. It is well and good to marry the kind of man one marries, but quite another to never be forced to question such a decision.

This is all handled pretty delicately, though very much in the tradition of Japanese film and theatre. I know there are some who take exception to the kind of outsized performances one encounters in these modes, but once one finds an “in,” they can prove remarkably affecting. By the time Gate of Hell dissolves into the kind of titanic, existential horror it becomes, any sort of subtlety to the performance would seem woefully ill-suited. 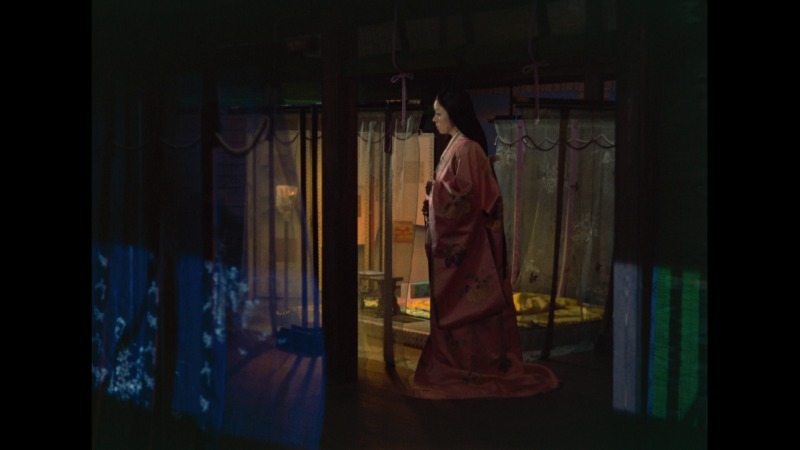 The film has really garnered its current reputation, such as it is, for its wild use of color, which really has to be seen to be believed. I adore Technicolor in the 1950s, and this was about as far as I think I’ve ever seen it taken. As I hope the frames here represent, this is outsized in the best of ways. In the accompanying booklet, Carl Theodor Dreyer(!) writes about this very aspect, noting that a director’s capacity to represent reality should not be a desirable artistic pursuit, but that s/he should emphasize the elements of reality most important to whatever the filmmaker is trying to do with a given piece. “The realities must be forced into a form of simplification and abbreviation and in a purified state reappear in a kind of timeless psychological realism,” he writes. And even those for whom the dramatic impact of the film is less than substantial (I’ll admit that the whole thing didn’t entirely work for me, feeling occasionally elongated without a presence of life to fill it), the visual experience is so otherworldly, so transportive, and so, as Dreyer says, “purified” that to come away from this film with nothing at all would be to bring nothing to it in the first place.

Masters of Cinema certainly brought much to their new Blu-ray edition, punching the colors past the extreme to the point at which they almost seem to emerge from your screen, words I do not mean at all in the negative. They are cleanly separated from one another, bold and bright when they need be and carefully subdued when they need not. Detail, of course, is superb, a light grain gives the image tremendous texture, and the whole thing is as crisp as you could ask for. Because Technicolor is so delicately bold, it’s the easiest to mess up in a digital transfer, and as fond as I am of black-and-white, it is this area in which Blu-ray truly thrives, and this new disc from Masters of Cinema is possibly the finest example I’ve yet seen.

Supplements are scarce, limited only to a theatrical trailer, though you do get a pretty swell booklet to go along with it. In addition to the aforementioned piece by Dreyer, which is pretty essential reading, there’s also a longer essay by film critic and historian Philip Kemp, who takes a typical informative/analytical approach to the film, and it really stands as one of the better essays I’ve read from MoC in quite awhile. In the hierarchy of Japanese filmmakers, assuming Kurosawa and Ozu at the top, Kinugasa is almost never discussed (I’ll admit his name was unfamiliar to me), and Kemp really seizes the opportunity to dive into what’s available, mentioning a few films that I’m now dying to see (the “dreamlike” silent Kurutta ippeiji (A Page of Madness) now being near the top of my must-find list).

Long unavailable on home video, Masters of Cinema have once again does us a great service by providing Gate of Hell in such a lush edition. Short on disc-based special features, but rich in booklet-based ones, if you’re at all into 1950s Japanese cinema, this is one you shouldn’t miss.