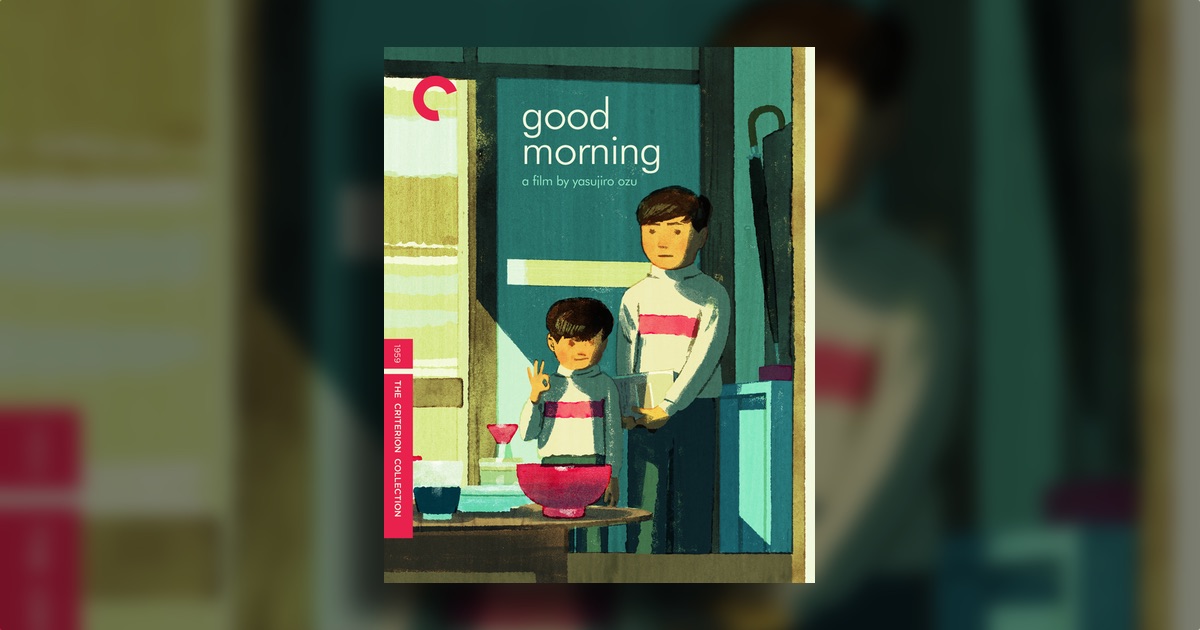 The long anticipated, seemingly inevitable but frustratingly overdue upgrade of Yasujiro Ozu’s second color film Good Morning finally became a reality earlier this week. A pristine new edition of Spine #84 has just landed on the shelves, and it’s a cause for joyful celebration for Ozu aficionados and newcomers alike, who now have the opportunity to rediscover one of the great director’s most enchanting films. It’s hard to overstate just how much a new transfer and a tidy array of supplemental features allow Good Morning‘s virtues to shine, but I can attest without reservation that this release feels every bit as essential and fully realized as any of the other three Ozu Blu-rays that Criterion has previously made available.

Yes, Tokyo Story, Late Spring and Autumn Afternoon, the director’s final film, are all widely esteemed as monumental works, whereas Good Morning is often relegated to “lesser Ozu” status. It’s even frequently regarded as inferior to the feature length supplement on this disc, 1932’s silent I Was Born, But…, an appraisal I consider both unfair and all too common. I won’t bother to argue about the relative magnitude of these titles as if they were rivals with each other. I’m more content to simply underscore the point that each of them provides a distinctive entry (or, as the case may be, re-entry) point into Ozu’s meticulously crafted realm. Indeed, Good Morning, as a light and breezy alternative to the more ponderous films that made him famous, just might, in this newly revamped package, prove to be an ideal introduction to Ozu for viewers who have yet to make his acquaintance. That’s almost certainly what Criterion must have had in mind when they chose this particular film as their first Ozu DVD back in 2000. Unfortunately, that disc was seriously hampered, practically sabotaged by a shoddy transfer, a terrible cover, and a bare bones, supplement-free presentation that proved to be almost insulting in its paucity. The beauty and the charm still came through, despite the obstacles, but it shouldn’t require so much accommodation on the viewer’s part to truly enjoy a marvelous film. It’s taken 17 years for the Criterion Collection to get it right, but I’m delighted to verify that they did indeed. Our patience has been rewarded.

Good Morning‘s new Criterion version was issued nearly 58 years to the day (May 12, 1959) that the film made its theatrical debut in Japan. As the 1950s drew to a close, the end of the decade marked a time of tumultuous cultural transition in that nation. A new generation of filmmakers, movie watchers and consumers were coming of age. The dismal struggles of rebuilding the nation were beginning to fade in the collective memory, with the emergence of hordes of young people who had no awareness whatsoever of the deprivations their elders had to survive to get to their current point in history. As a member of the generation then settling into an awareness that it was now their time to start handing over the reins to their successors, Ozu’s films of this period became increasingly focused on the little frictions that occurred between neighbors, family members and friends, as norms and traditions were called into question at times, and in many other ways were not even considered. Whether those scrapes and disappointments resulted in deeply felt stages of grief and mourning, or momentary bursts of petulance and exasperation, Ozu’s camera was there to capture those evocative moments, as expressed by his brilliantly nuanced and disciplined cast of actors.

In Good Morning, Ozu’s attention is focused on the comedic and adorable exploits of a quartet of schoolboys, two brothers in particular. The driving force of the plot, admittedly slight, is that the kids are all caught up at an early age in a race for status based on whose household has achieved the highest level of material prosperity, as determined by who can or cannot afford to install a TV set in their modest suburban Tokyo homes. Oh, and there’s that other competition – who can fart on demand, when one of their peers pokes them in their third eye. Flatulence is the running gag that Good Morning is indisputably most famous for, and the unique method in which Ozu exploits that humor is quite capably analyzed on this disc in a nice short clip featuring critic David Cairns, who demonstrates that while this film offers Ozu’s most extended deployment of scatological gags, it’s far from being unique in his oeuvre.

For added insights on the film itself, I’m going to indulge in a bit of a shortcut here, directing you to read my more in-depth consideration of Good Morning that I wrote up for my blog back in 2011. And hey, while I’m at it, here are my observations on I Was Born, But…, the bonus feature included in this splendid package! For good measure, may I also share a link to my podcast discussion of that same film, way back when Rob Nishimura and I first rolled out the original version of The Eclipse Viewer podcast back in 2012?

I won’t deny it – for me and many others eager to add this disc to our home libraries, this new upgrade of Good Morning and all the other goodies included therein is mainly just a welcome repackaging (with what must be the greatest leap ever of “absolute worst” to “most perfect” cover art of any Criterion upgrade) of material both beloved and exceedingly familiar. For us longtime Ozu fans, the surprises and discoveries are muted quite a bit, compared to those who have not yet taken this voyage into two distinct and vital phases of Ozu’s comprehensive and endlessly poignant body of work.

Still, I was particularly eager to see how I Was Born, But… looked in high definition, as it represents the first Eclipse Series title that Criterion has issued on Blu-ray, an interesting and also much anticipated development, to say the least. I won’t go so far as to say I’m disappointed in what I found, since the transfer looks pretty much as I expected it would – a bit sharper in the details, and of course the subtitles always look better on Blu-ray than they do on DVD. But the film itself didn’t go through any noticeable restoration, so the print damage and general scruffiness of the old Eclipse image remains. I’ve grown accustomed, even a bit fond, of that battered timeworn presentation, but I suppose it’s only fair for me to alert potential customers that there’s a reason that Criterion didn’t advertise this as a double-bill along the lines of their Floating Weeds/A Story of Floating Weeds dual-disc from 2004 that also features an early Ozu title and its late 1950s remake – or even this year’s His Girl Friday/The Front Page one-two punch, for a more current reference point.

No, there’s nothing quite that ostentatious or overtly attention-seeking to be found here in this relatively modest, though utterly delightful entry into Criterion’s May 2017 lineup. It’s just a genteel, 90 minute slice of Japanese life, elevated to dimensions of transcendental sublimity under Ozu’s masterful guidance, waiting to receive us whenever we’re in the mood to enjoy a few chuckles at the antics of cute kids, wannabe bohemians, gossipy housewives, and their exasperated, occasionally inebriated husbands as we recognize little bits of ourselves in each of them and see the larger themes in the various mundane goings on. That’s the magic and the marvel of Ozu, and it’s a privilege to be greeted by this wake-up call whenever we might be in need of a smile and a wave, or maybe even a poke to our forehead, that will bring us back to our senses.