It’s almost been a full five years since Alfonso Cuarón’s Y tu mamá también was announced to be included in the Criterion Collection, and back then that same IFC Films announcement proclaimed many other great films that were apart of the deal. Titles like Gomorrah, A Christmas Tale, Hunger, Che, Following, The Secret of the Grain, and Everlasting Moments came and went, rightfully taking their place among the other classics in Criterion’s lineup. Yet with each passing year, and each passing New Year’s drawing, no matter what happened Cuarón’s modern classic seemed to quizzically fall by the wayside. I guess he was just too busy wrapping up the multi-year production on his Academy Award winning potential modern classic Gravity to give the film that put him on the map any attention. But all that is no matter, the film has finally been given a dual format release and ranks among the more solid packages from Criterion this year.

Y tu mamá también is perhaps the best Nouvelle Vague film not made by anyone associated with that venerable touchstone of French cinema. While not as radical as many of those New Wave films (also, tellingly, it’s not French), Cuarón’s film is imbued with just as much wildly adolescent energy and political subtext as anything Godard ever did in his heyday (Cuarón and his brother, co-writer Carlos Cuarón used Godard’s Masculin féminin as a kind of influence), but what separates Y tu mamá también from the rest is its forthright acceptance of the tumultuousness found in those energies and its embrace of life and love.

The two leads—Tenoch (a perfectly snotty rich kid played by Diego Luna) and Julio (a perfectly jaded social climber played Gael García Bernal)—are on the cusp of adulthood, and only through taking a potentially futile journey to a fake beach that both of them ostensibly make up will their jilted lives suddenly be affirmed through experience and sexual awakening. Getting there doesn’t make it a sense of understanding, but rather the realization that they don’t have all the answers to life despite thinking they do. Along with them on that journey is the fragile and worldly Luisa (a stately Maribel Verdú), a woman who pulls both friends together who must also reluctantly confront her own life in the same way. There is a sly grace at which the true nature of Luisa’s plight unfolds which warrants multiple viewings, but not in a mind-bending Memento sort of way. The film itself subtly works over the layers of each character, using the road trip as the catalyst.

What makes the movie so memorable and why it works better than it sounds isn’t just the excellent rapport and hilarious squabbles between the core three—or the surprisingly sensual love triangle—but rather the film’s greater sense of scope. Numerous times the unnamed narrator (an uncredited role by Sólo con tu pareja actor Daniel Giménez Cacho) pulls away from the action to comment on the greater context of the story we’re watching, be it a lower class worker’s death that causes a traffic jam early on or remarking on an eventual bacterial outbreak caused by a group of pigs that ransack the groups’ camp at the end. The most subtly heartbreaking example of this is a fleeting moment where the upper class Tenoch notices a road sign from the car for the small village where his working class nanny was born. These seemingly random asides do more than just give us an idea of the bigger world outside the journey. Instead they transcend the cliché of “place as character” to give us a vivid snapshot of Mexico onscreen and in the characters’ lives for posterity. They are multi-faceted visual memories.

Couple this with the equally wandering and sun-drenched fluid motion of cinematographer Emmanuel Lubezki’s camera and the equation turns out to be something truly special. The eye of the camera—flecked with sunlit lens flares—strolls in a way that not many films can pull off, and even when shots meander into empty rooms Cuarón and his cinematographer make sure it means something to the narrative—a delicate feat that seems less easy to do the more you think about it.

After five years of waiting, Criterion has put together a fairly packed release replete with features that primarily cover the film’s production. One feature, split into two sections each titled “Then” and “Now,” offers onset interviews during the production and contemporary recollections of the film from all those involved. “Then” is fairly straightforward, and is more interesting because it portrays everybody as fresh-faced and holding nothing back in this obviously invigorating experience as it was happening. “Now” gets into more appropriately retrospective territory and also some of the inspiration behind the screenplay by Alfonso and his brother Carlos. There’s even a pretty great anecdote about how they came up with the Charolastras and their manifesto. Another on-set doc, carted over from a previous DVD release, takes an interesting route with more wry commentary by Cacho who proceeds to make fun of everybody onscreen while also staying fairly informative.

The most bonkers extra is a small featurette with philosopher, cultural critic, and certifiable madman Slavoj Žižek who talks about the political context within the film. At times random, the intellectual reading of the film is definitely illuminating if you didn’t pick up on many of the techniques Žižek talks about already. But if you have a solid take on the film then it mostly functions as a curiosity about Žižek himself who can’t seem to sit still or stop touching his nose. Still, the academic reading never seems dry and is definitely worthwhile.

A surprisingly strong special feature included here is a short film called You Owe Me One, directed by Carlos Cuarón. It doesn’t necessarily have any real connection to Y tu mamá también, but it does bend the same sexual politics of the feature film in a more comedic light. I always love when Criterion included other features or short films tangentially related to the bigger release, and this one is definitely one of the better ones I’ve seen, if not the funniest. Also tacked on are some trailers and a few pretty superfluous deleted scenes, which were thankfully—and obviously—deleted from the final film.

Cuarón’s breakout hit is finally in its right place in the Criterion Collection. It’s a wild breath of fresh air that appropriates its own influences and speaks volumes within its own context, and yet it is the simple story of two boys and a woman on a road trip together. There’s not much more to it than to say that Y tu mamá también is truly one of those special movies you either get or don’t. I definitely get it and its celebration of cinema and the sometimes-untamed wonders of the ups and downs of youth. It may not be the flashiest release, and it sure did take awhile to get to us, but Y tu mamá también is definitely worth your time in an already packed year of Criterion greats. 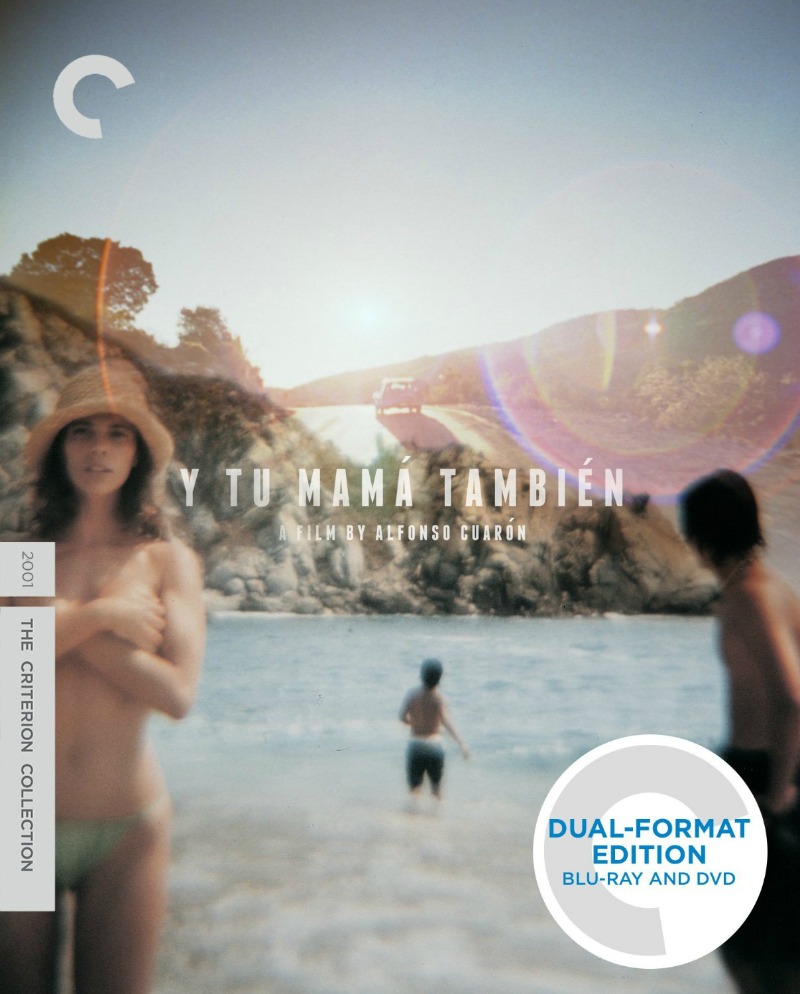