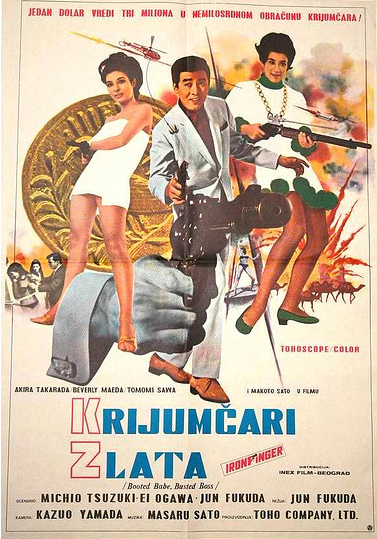 Golden Eyes, directed by Jun Fukuda (more famous for his Godzilla sequels shot around this same period) is a trifling goof of a film, probably best suited as a Saturday matinee indulgence whenever one happens to be in the mood for lightweight distraction of little or no substance. The movie qualifies as a Criterion title only on account of its availability on their Hulu channel. I seriously doubt that it will ever be dignified with a release on physical media in this country, unless Criterion ever decides to open a print-on-demand service, in which event I figure at least a few copies will be snatched up by J-Pop cultists who have a special appreciation for the slightly bonkers aesthetics of this era. It’s a 1968 sequel to a film released in 1965 that in English-speaking countries is known as Ironfinger, but the original title translates as 100 Shot, 100 Killed – a reference to the deadly accuracy of Andrew “Call me Andy!” Hoshino, the marksman, secret agent and action figure at the center of the film. His gun basically functions as a magic wand, achieving practically any effect that can be imagined by aiming a well-placed projectile either at a living creature or an inanimate object.

For the sequel, the original title reads something along the lines of 100 Shot, 100 Killed: Golden Eye (which I assume Criterion pluralized to avoid confusion with the Pierce Brosnan-as-Bond reboot GoldenEye), but audiences of the late 60s saw it as Ironfinger Strikes Back, or even better, Booted Babe, Busted Boss, which sounds pretty cool but isn’t really all that accurate of a description of what goes on here. Both films feature him involved in the kind of mysterious international intrigue popularized by James Bond films of that era (note the titular similarities to Goldfinger when it came time to decide on what to call the films for international audiences.) So one can expect a swift advance through various plot machinations involving beautiful women in skimpy attire, lurking assassins hiding around any corner, some highly coveted or dangerous object that everyone is trying to get their hands on, and a variety of international locations to provide a sense of global scale and action as scenes shift from one exotic set-up to another. The main problem here is that Golden Eyes is a low-budget knock-off that’s only capable of seducing viewers already vulnerable to its pedestrian charms.

Well, as I’ve already said, it’s a film of its time, capitalizing on the international super spy craze, but giving a preferential twist to Japanese action figures rather than using them as scenic backdrops as was the case in the Bond franchise’s entry You Only Live Twice, which had been released the previous year. There might also be a bit more attention paid to contemporary concerns about Japan’s dependency on global commerce, as the action starts in Beirut where sinister Arabs (actually, Japanese actors in very problematic brownface) menace the Asian protagonists. The movie also casts a decrepit old man as eccentric billionaire “Mr. Stonefeller (not “Rockefeller”… get it?) as the blind arch-villain willing to kill without mercy to protect his financial hegemony. But whatever attempt is made to speak meaningfully to issues of the day, it’s hard to take any of this seriously, since the cartoonish overlay suffocates any insightful critique that the film’s creators had in mind. It’s hard for me to see how Golden Eyes could have been seen as much more than a slightly silly, marginally entertaining romp at any point in its existence.

It doesn’t really have all that much to say, now that I think about it. “Hey, they sure did make some delightfully kooky action-comedy-thrillers in Japan in the 1960s” is about as charitable and enthusiastic take as I can muster. “Fun enough while it lasted,” but at only 71 minutes long, that’s not saying all that much. I enjoyed a few laughs at the incongruity of it all (the skyhook stuck in the back for an opener, disguised assassins on parade along a cliff pushing baby strollers that hide sub-machine guns, the champagne-bottle firing squad toward the end, and a few other bits), and the short musical jibber-jabber go-go girl interlude delivers a nice payoff around the halfway point. The mod wardrobes of Andy and his female companions provide bright visual stimulation, but nothing all that special considering the era. Some of the stunts and gags were poorly executed, there’s no getting around it, and might have best left on the editing floor. Even though I watched it twice just to make sure I wasn’t missing something, the bottom line is that despite his vaunted accuracy, Andy Hoshino missed his shot with me, and probably with the broader public, as there were no more films made in what appeared destined to be a multi-episode series. Ironfinger is no Zatoichi.

Here are several links that look a lot more deeply into Golden Eyes than I obviously care to.

Previously: I Am Curious (Blue)