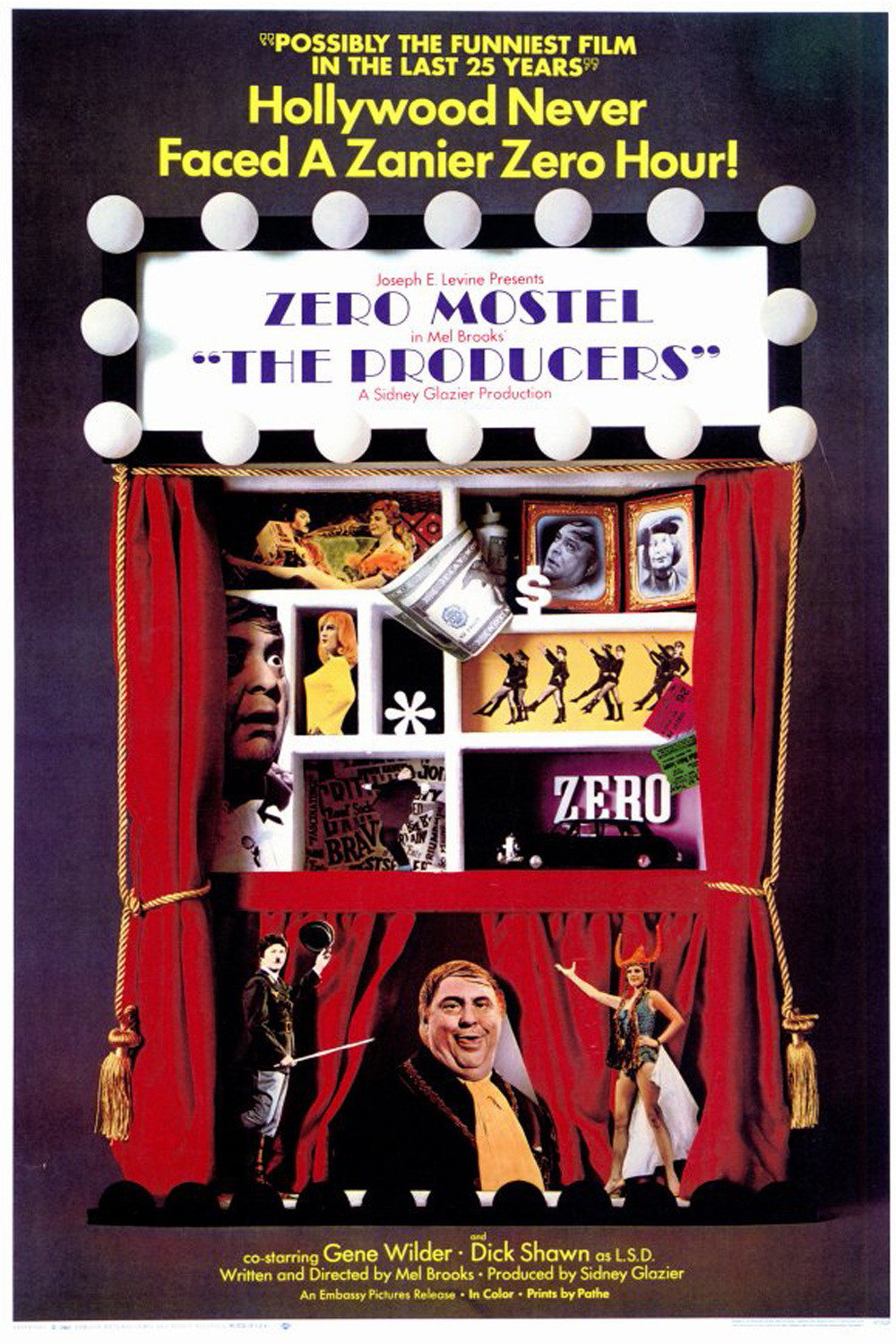 A brash, vulgar, wildly energetic and shamelessly provocative comedy romp that launched Mel Brooks as a film director, Gene Wilder as a popular comic actor, and grossly expanded the latitude extended to comedians in cinema, establishing radically poor taste as an acceptable marketing strategy in mainstream entertainment. Though The Producers is fondly remembered, massively influential and boasts some truly unforgettable sequences of inspired lunacy, too much time is dedicated to histrionic leering, shouting and shrieking episodes that don’t deliver enough in terms of wit to earn my enthusiastic endorsement overall. The story line is pretty familiar – a rambunctious Broadway showman conspires with a neurotic accountant to bilk investors in an offensive production, only to see their plan foiled when the play becomes an unexpected hit. The premise is clever and offers a broad platform for unbridled zaniness. A lot of the humor is based on shattering uptight taboos that I’m sure deserved the mockery they received back in that era, and I definitely respect Brooks’s zeal for offending fascistic and authoritarian sensibilities. But as was the case with another Laserdisc-only Criterion release King of Hearts, a very different film in many ways, a lot of the bits meant to be funny or charming in the 1960s just don’t hold up all that well for me today, at least not in a home viewing context. Watching it in a repertory/revival setting, surrounded by an appreciative audience busting up with laughter, would be a much better way of experiencing The Producers in 2016. (Or of course, there’s the megahit Broadway musical adaptation and 2005 movie remake, both overseen and approved by Mel Brooks himself. But at this time, I have no interest in commenting on any of that.)

Boundaries of free expression were getting pushed outward all over the place in 1968. The I Am Curious films of Vilgot Sjöman that I discussed recently on a Main Episode podcast with Scott Nye and James McCormick eventually created a huge court case that wound up overturning obscenity laws in the USA. Bonnie and Clyde and The Graduate (covered on Criterion Close-up a few weeks back) introduced new levels of explicit violence and sexual candor into mainstream Hollywood entertainment. Despite its origins in low-budget kitsch, The Producers can rightfully be included in such lofty company inasmuch as its makers had the audacity to lampoon a wide range of previously forbidden subjects with crazed disregard for any concerns about hurting the feelings of prudes or more serious-minded viewers. The premise of a musical production number titled “Springtime for Hitler,” featuring the despised dictator and notorious war criminal prancing about onstage surrounded by showgirls adorned with stereotypical German objects (pretzels, beer steins and Nazi military paraphernalia), was just the start.

Brooks gleefully weaves horny octogenarians, mincing gay artistes, pompous transvestites, maniacal Nazi sympathizers, stoned pseudo-philosophical hippie windbags, greedy money-grubbing Jews, and numerous other crude caricatures into his script. They all exclaim without inhibition whatever self-serving thoughts or unfiltered impulses they might be feeling at the moment, with rampant lust (for money, sex, fame, power, whatever they most crave) serving as their primary motive. Though a few characters occasionally give voice to some small degree of hesitancy or remorse about their corrupted actions, they never show the slightest concern about actually harming or exploiting anyone – it’s more about their fear of getting caught and the consequences they might face afterward. Much of the time, it doesn’t feel to me like Brooks is leveling a satirical critique at human venality as much as he’s merely wallowing in it. He knows how such material works on the stand-up comedy circuit, and now he’s taking advantage of the new freedom to splatter it up on the screen. What humor there is to be found in these scenarios derives primarily from the surprising incongruity of seeing characters give loud and raucous expression to such craven desires. That can be pretty funny when it’s truly unexpected, but the plunge into bedlam felt too abrupt once Gene Wilder’s Leo Bloom character showed up in Max Bialystock’s office and all the screaming began. Their antics must have felt fresh, brave, radical and refreshing to many in the audience at the time. And The Producers still packs a punch in that regard, even as it’s been surpassed in just about every direction imaginable by the legion of movies that rely on such shock tactics, the origins of which can probably be genetically traced back to this breakthrough eruption of coarse megalomania pitched to the audience as winsome charm. Brooks’s approach obviously hit a nerve, harshly rubbing some critics the wrong way while also earning stratospheric praise from others. (I’ve included a few vintage reviews in the links below.) He also struck some pretty rich pay dirt. The Producers went on to earn him an Academy Award for Best Original Screenplay, generated a solid return on its less than $1 million investment, and opened the door for Brooks to continue working steadily as a writer and director over the next few decades as films like Blazing Saddles and Young Frankenstein became fixtures of the comedy canon.

I certainly won’t dispute the fact that a lot of people still find The Producers to be an uproariously funny and delightfully enjoyable movie, and not all of them are old-timers harboring fond memories of watching Mel Brooks comedies as teens or young adults in decades past. I was fortunate enough to be a teenager in the audience when Blazing Saddles, Young Frankenstein, High Anxiety and Silent Movie made their initial theatrical runs, and because of that early exposure, I retain a nostalgic affection for the happiness those films delivered at the time. But just as a lot of the humor I chuckled at in Mad Magazine from around that same time now strikes me as corny, dated and juvenile, I really don’t think those movies hold up all that well, certainly not with the kind of consistency that makes me want to rewatch them all that often, nor with anything approaching the enduring power to bring delight, amazement and deeply felt laughter that I get when I watch much older films from Charlie Chaplin, Harold Lloyd or even some of the better shorts from the Three Stooges and W.C. Fields. For all the indisputable bravery of defying conventional standards of propriety and the rapid-fire exuberance of Brooks’s comedic onslaught, a lot of what once passed for hilarious in The Producers and his subsequent works now feels simply embarrassing and indulgent, if not excessively laborious in its barrage of tauntingly childish cheap shots that I outgrew a decade or two ago. I’m thinking primarily of the Liebkind and Ulla characters as being especially lame and grating. I do like the musical numbers quite a bit – the showstopper already embedded above is a classic, so engagingly inappropriate, but “Love Power,” the psychedelic protest anthem sung by Dick Shawn in the character of L.S.D., and the finale “Prisoners of Love” are just as strong.

So my bottom line on this one is that I’m content to acknowledge the important place that The Producers holds in modern American film history, and I think it deserved its inclusion in the Criterion Collection back in the late 1980s. (It even deserved better treatment than the barebones package that includes just a trailer as the only supplemental material.) 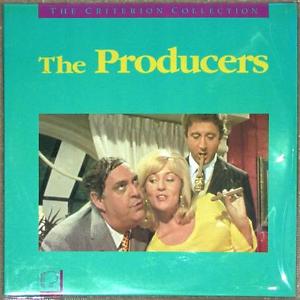 But I’m glad that the rights have been acquired by a different publisher in the 21st century, as I don’t think it’s a good fit for what Criterion’s become nowadays. For this review, I watched it on a solid dual-format edition produced by Shout Factory a few years ago. It features a nice array of supplements that provide insight on how the film was made, interviews with Brooks and living members of his cast like Gene Wilder and Lee Meredith. (Unfortunately, Zero Mostel and Dick Shawn, the two most interesting personalities I’d most like to have heard from, are both deceased and weren’t available for interviews.) I could see myself revisiting the disc from time to time to take in a few scenes, and I suppose it’s good to have on hand should the occasion of a massive Mel Brooks marathon ever seem like an idea worth acting on. Nothing too urgent, but you never know. Having watched it through a couple times now, I can’t escape the sense that at some strange meta-level, The Producers is exactly what Bialystock and Bloom themselves were trying to foist on their audience: a show so lacking in redeeming social value, so rudely oblivious to the insult it was inflicting on its viewers, that the most appropriate response on our part would have been to just stop watching, get up and leave. But we’d already bought our ticket, and word of mouth told us that this was a boffo entertainment. We might as well see where it goes. And what do you know, it’s a satire after all! A parody of all those buffoons in showbiz so willing to exploit the gullible bumpkins out there who slurp up the drivel they’re peddling and come back begging for more. Hahahahaha! That Mel Brooks, what nerve! He cracks us up! So funny, when the joke is on somebody else… not on us, oh no, not on us!