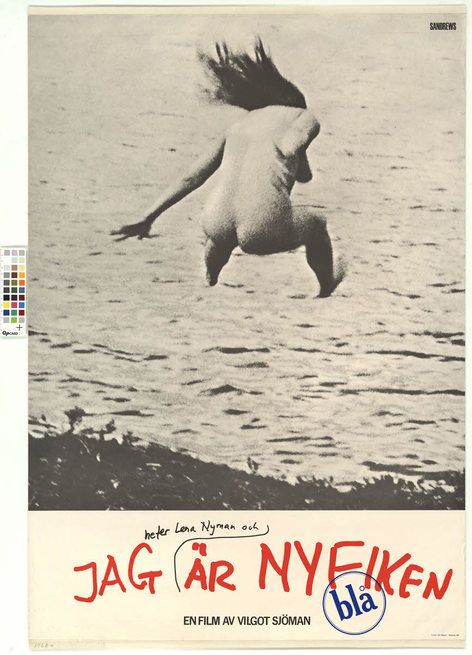 Both of Vilgot Sjöman’s I Am Curious films are far too often unjustly overlooked and appear to have been saddled with harsher reputations than either of them deserve. (Yellow) probably suffered a serious backlash due to its extraordinary popularity after it was censored and brought before the United States Supreme Court as obscene and therefore prohibited material, even though it doesn’t begin to approach anything we’d consider pornographic by contemporary standards. (Blue) was likewise dismissed and overlooked by the same crowds who were underwhelmed by (Yellow), expecting to see something that Sjöman never intended. Together, the two films are really just a combined, extended 3 1/2 hour anthology of Swedish culture and politics of the late 1960s as seen through the eyes of the director Sjöman and his young protege/lover/antagonist Lena Nyman, roughly half his age and full of idealistic confidence in her ability to figure out both what’s wrong with society and how to fix it. I find the films’ combination of subversive wit, naive enthusiasm, brash energy and formal experiments with narrative to be quite winsome and charming. Watch them with a curious and open mind, I think you will find plenty to enjoy and perhaps even be challenged along the way.

I Am Curious (Blue) was released in early 1968, several months after I Am Curious (Yellow), and well before the earlier film had begun its trek toward infamous notoriety in the USA when it was seized by customs agents in Boston in November of 1969. So even though I think both of the films speak quite eloquently to concerns that were in the air all around the world in 1968 – indeed, the content and presentation are about as “1968” in their attitude as a film could ever be regarded – it’s practically impossible to watch them without the subsequent controversies surrounding the film influencing our assessment.  As for the particulars, (Blue) touches on a full litany of hot-button issues, including sex education, same sex attraction, double standards between the genders regarding promiscuity, wealth and income inequality, separation of church and state, organized protest movements, sexually transmitted diseases, theological debates, the institutional treatment of prisoners, the government’s priorities for distribution of financial resources, and perhaps as a theme underlying the entire project, the human penchant for voyeurism that comes through in the creation of cinematic art and any number of other more mundane pastimes shown over the course of the film. We’re all inherently curious about what others are thinking, how they’re behaving, and what motivates them to do what they do. Both of the I Am Curious films do a pretty commendable job at taking a big swipe at what was on a lot of people’s minds at the time, and giving viewers a representative slice of many points of view. The fact that a lot of the opinions expressed are pretty bland, conventional, non-committal and probably even oblivious to many of the complexities of the topics being raised speaks eloquently to how we rationalize such dilemmas, for the sake of self-serving convenience or even just coping with the pressures of daily life.

Last week I recorded a podcast with Scott Nye and James McCormick, both regular contributors to this site, so I will post that link here when the episode goes online. After I give it a re-listen, I may revise this section to include any thoughts on (Blue) that I forgot to mention in our conversation. Overall, this feels like a bit of a “lesser” film than (Yellow), and not just because it’s twenty minutes shorter than its predecessor. The earlier film was the breakthrough, with a few iconic moments of sexual candor and wacky humor, not to mention an interview with Martin Luther King Jr. On top of that, of course, (Yellow) after it was embroiled in legendary legal turmoil, became a huge money-maker that also fundamentally enlarged the limits of artistic expression, in this country at least. And the American film industry has always had a lot of clout in setting the terms for world cinema, so Sjöman’s accomplishment in this pair of films was certainly amplified on a global scale, even if indirectly. But there’s really no point in rating one film above or below the other, since they’re both equally deserving (or not) of your time and attention. If you have any doubts, maybe just start with (Blue) since it requires less of your time to decide whether or not you’re curious enough to complete the trip.

I Am Curious (Blue)

Film Quarterly review (1969) by Clyde B. Smith (excerpt)
New York Times review (1970) by Vincent Canby
Criterion Confessions
Film Grimoire
Not Coming to a Cinema Near You
Only the Cinema

I Am Curious (Box Set)