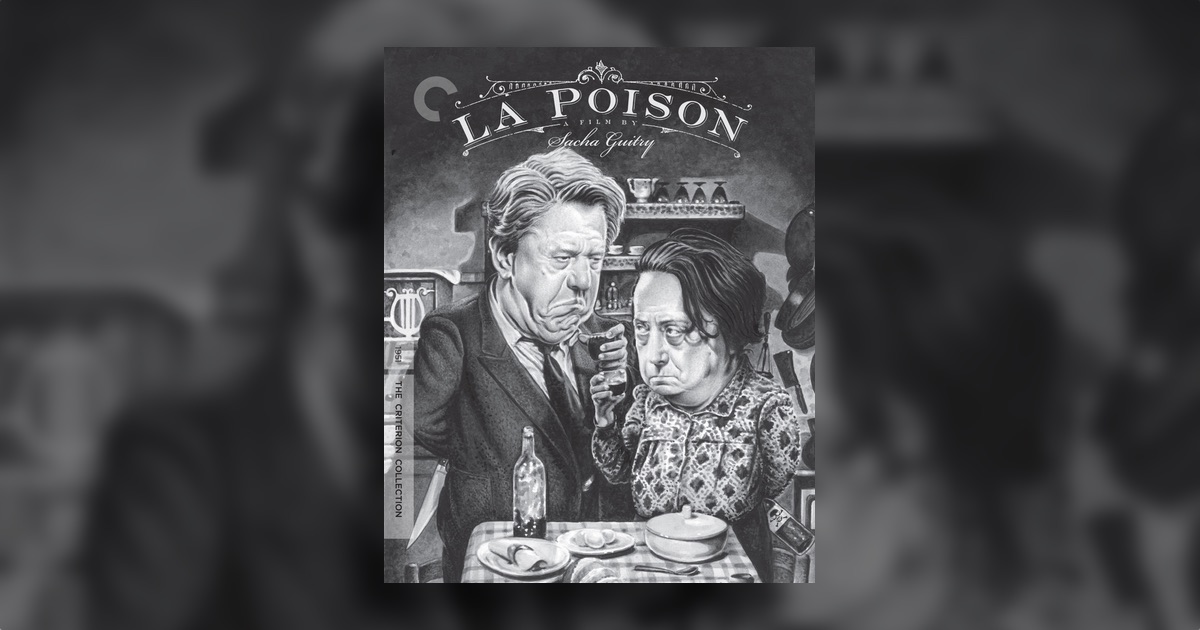 Watching Sacha Guitry’s Blu-ray debut in the Criterion Collection provokes a bittersweet sensation, on multiple levels. First and foremost, there’s the acerbic theme and humorous treachery of La Poison itself – a pitch-black comedy that wittily dissects the miseries inherent in a marriage of French peasant folk that endures far longer than either of the bedraggled spouses are capable of withstanding. As a man who happily celebrated my 33rd wedding anniversary over the past weekend, nevertheless, I’m more than familiar with the unique strains that can develop between two persons over the course of a few decades lived in close proximity to each other. Even though I’ve never approached the point of murderous intentions that afflict the couple at the heart of this story, the basic impulses that drove them to such desperate measures are well within my frame of reference. And all things considered, there’s always a measure of relief to be found in enjoying some hearty laughs at the expense of a wretched couple far worse off in their state of mutual contempt than I ever expect to be.

In addition to La Poison‘s grim hilarity, the new Criterion edition also provides a much-needed re-introduction of the great and utterly inimitable Sacha Guitry, especially to viewers who have not yet taken advantage of the opportunity to get in touch with his earlier work, where the writer and director of this film also held center stage as his preferred lead actor. The most convenient vehicle for making that acquaintance for North American viewers is, of course, Eclipse Series 22: Presenting Sacha Guitry. It’s a set that I especially enjoy, among so many other wonderful volumes in that currently dormant line of DVDs, as it shows Guitry in his prime, as a supreme bon vivant in full command of his wide range of powers: a master of monologue, prestidigitation, disguise, narrative innovation and all-around showmanship. In those four films, all released within a period of just a few years, Guitry comes across as an irrepressible life force, brimming over with wit, imagination and a carefree, jaundiced but still insatiable joie de vivre who steadily compels my attention even when a couple of the films themselves occasionally feel a bit slight or hastily tossed together.

The “bitter” aspect of this new package is that in  La Poison, we’re encountering Guitry at a later stage of his life. Between the films of his Eclipse Series set (and a new collection coming from Arrow Films later this year, just announced yesterday) and this one, more than a dozen years have passed, a decade-plus filled with legal problems, social ostracism and appalling reversals of fortune, not to mention the usual ravages of time – especially those exercised upon a man who enjoyed life’s luxuries as freely and steadily as did M. Guitry. During a leisurely seven-minute opening credits scene, where Guitry indulges in his trademark spoken and visual introductions of numerous key contributors to his films (both on camera and behind the scenes), it becomes rather obvious that the director makes a deliberate effort to mask his appearance, beneath the brim of his hat, with his back to the camera, or simply presented at angles that make it hard to see him in his apparent physical decline. His voice and his ability to project a heartfelt attitude of bonhomie are as persuasively magesterial as ever, but the absence of his visage is conspicuous evidence of a man at least partially broken, to the point that he’s unable to step as boldly into the spotlight at this point in his career as many of his most ardent fans had grown accustomed to.

But Guitry, ever the sharp and intuitive showman, knew how to compensate for his withdrawal from offering the lead performance. In this instance, he had the advantage and insight to recruit Michel Simon to take on the role that in earlier times he would have relished for himself. As a beleaguered husband entrenched in a hopeless downward spiral of a loveless marriage, Simon throws himself into a performance that perfectly harnesses his ability to project genuinely affecting pathos and cocky irreverence simultaneously, through the same words and gestures. La Poison marked the first of three collaborations between Guitry and Simon, who had each established themselves as living legends of French cinema in their own way. Of the two, Simon seems to have enjoyed the most widespread acceptance and consistent admiration – a large and lovable slab-faced bear of a man who embodied a slightly warped ideal of determined-to-make-the-best-of-it masculinity that persevered over whatever obstacles and natural limitations life had imposed upon him.

In this story, Simon’s character Paul Bracconier bears the burden of being locked into a  marriage that is far past the point of being simply “loveless” or merely unsatisfying. La Poison puts effort into underscoring just how grotesque and repulsive his life has become as a result of his marital obligations.  His wife Blandine has, after 30 years of conjugal warfare, completed her full transformation into an unapologetic harridan. The imbalanced characterizations of both husband (as a reasonable man responding sensibly to his adverse circumstances) and wife (as a thoroughly hideous nag relentlessly intent on tormenting her long-suffering spouse) run the risk of opening Guitry to a charge of functional misogyny, at least toward certain types of women. Furthermore, it seems likely that a close examination of his personal life, in particular his five marriages all of short duration, would provide more evidence along that line. I figure that there will be more than a few viewers who might find his sins unforgivable in that respect, but I hope that anyone taking offense at the predicating set-up, which concludes with Paul’s premeditated murder of his wife, will at least stick around until the concluding courthouse scenes, just to give Guitry and Simon a fair chance to make amends. The final fifteen minutes or so deliver a marvelous coup de grace, with Guitry serving up a brilliantly subversive, absurdist fantasy of disorder in the court that Simon absolutely slams home with insouciant relish. As a man who presumably was compelled to bite his tongue during his own unfortunate run-ins with the French legal system, or perhaps paid a steep price for unleashing his wit too freely in the presence of prosecutors and magistrates, I can only imagine the fervor with which Guitry threw himself into scripting these exchanges.

During the years of World War II, when Guitry continued to work in the French theatrical scene and enjoyed many comforts of life that were denied to his fellow citizens, he garnered an undeserved reputation as a collaborationist with the Vichy regime, and there might have been others even more zealous who considered him sympathetic to the Nazis. I can’t speak with any authority on that topic, but the supplemental materials included in this release do have the effect of exonerating Guitry from at least the most egregious of those accusations. The fact remains that even though he was imprisoned for several months after the war, Guitry was never convicted of any criminal actions, due to a lack of any substantiating evidence. The particulars of all that controversy were, I’m sure, a source of much pain and anguish among those personally involved.

But the effect of time, as it recedes into history, is to level out whatever moral and ethical compromises we make along the way, so that the lasting evidence of a creative lifetime is allowed speak to succeeding generations. In this sense, La Poison serves as an effective statement of legacy for both Sacha Guitry and Michel Simon, and an invitation to regard life from their respectively shrewd and worldly-wise vantage points. For Simon, he’s the epitome of insubordinate eccentricity, a man aware of his own limitations and flaws, but always willing to speak truth to the authorities, confident that the candor of his testimony will be accompanied by the power to retain his freedom, even if he winds up in handcuffs or behind bars. For Guitry, it’s his ability to dive deeply into and offer detailed explorations of the pleasures and pitfalls of human vanity. He has a sharp, discerning sense for revealing the essence of how we stroke our egos, and an instinct for penetrating the masks we adopt to disguise our baser motives, without the need to resort to crass vulgarity in the process. Among the Criterion lineup of 2017, this will probably rank among the less celebrated editions among the broader fan base, but don’t brush past Guitry without giving him due consideration. Sometimes, an ounce of La Poison is worth a pound of cure.