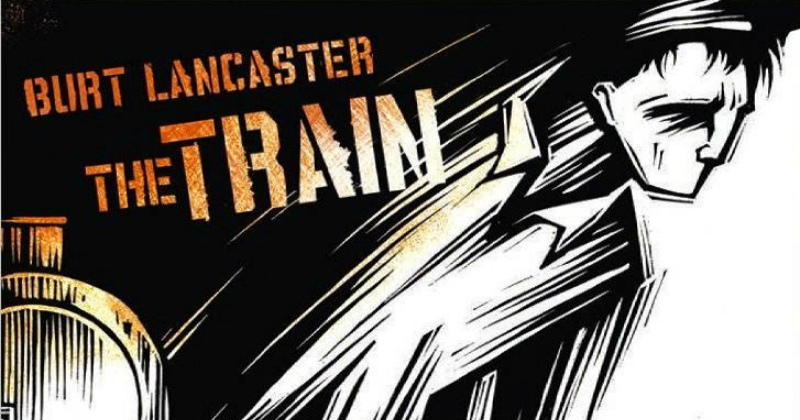 Though it quickly escalates into one of the most exciting, suspenseful action films of the 1960s, The Train starts off in near silence. A German officer walks amidst an art gallery, surveying dozens (hundreds?) of key works of French art. They have remained safe during the war, which is soon to end in Europe, as we learn from his conversation with the makeshift museum’s manager. Finally, a sigh of relief. But the officer turns on a dime, immediately orders all the paintings be shipped by train to Germany to keep them under German control after that army is ousted from France. If the art should survive the trip, of course.

The curation and preservation of classic Western art is now practically a given. Funding may be slashed and flushed, tastes may miss the mark regarding who or what is truly important, and it will forever remain a struggle to get the public to actually come see the damn stuff. But the idea that one could look at a building filled with classical works and genuinely fear for its physical endurance is practically unthinkable. This is good, of course. Artistic creation is a sort of immortality (whatever Woody Allen might say about that), and it’s our duty as its descendants to carry out that promise. But the knowledge that something will last forever does, in a way, make it less valuable. And the decline in appreciation for art may in some way be tied to this knowledge. 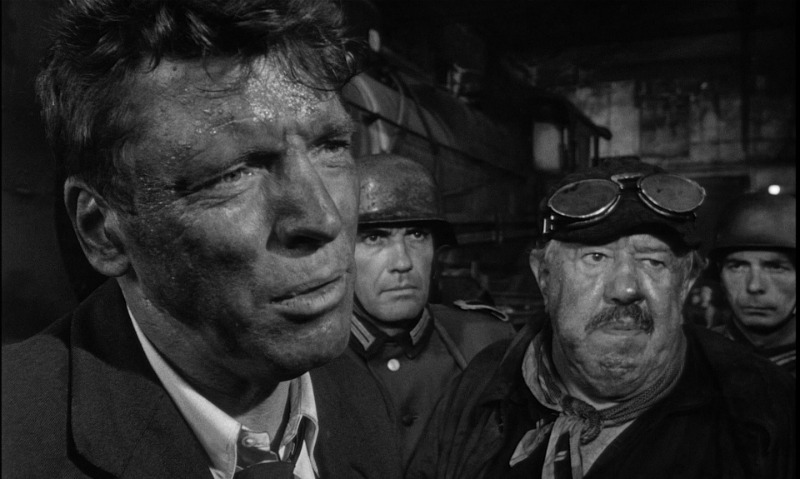 Not that I’m calling for the destruction of art; rather, for the celebration of The Train, which brings into sharp relief just how fragile it all is. That the film can cherish its preservation while forcing us to question whether it’s worth sacrificing lives for, all in the form of a breathtaking, edge-of-your-seat thriller is, somehow, only a fraction of its genius. It stars Burt Lancaster, a frequent Frankenheimer collaborator in this era. He plays, if not an everyman, then certainly – in the context of 1964, just twenty years after the end of World War II – a familiar one. Labiche is proud of his nation and has sacrificed much for the French Underground, but he doesn’t believe any art is worth dying for. The art belongs to the past; difficult to justify in a society that may not have a future.

For what it’s worth, Frankenheimer agreed with him. Quoted in the booklet that accompanies this release, he says, “no work of art is worth a human life. That’s what the film is about.” Respectfully, I must disagree. The Train was not Frankenheimer’s “baby,” as it were. It was initiated by Arthur Penn (Bonnie and Clyde), who cast Lancaster, but the two got along so poorly on set that Penn was jettisoned, and Frankenheimer came to the rescue. He reworked the screenplay a bit, but though the final film has the muscular energy that cements it as his work, it is the work of many authors. His opinion of the value of art is very much in the mix, but we’re also given several scenes to empathize and align ourselves with characters who believe wholeheartedly the opposite. Not only are their speeches quite rallying, but Lancaster is shown to be the one thinking too small in comparison. It is only at the end, when Lancaster surveys how many have died, how senseless the conflict is, that we’re given firm cause to believe the film ever sided with him at all. That conclusion does not invalidate what has come before, however. It complicates it, brings it into doubt, but this is not a work of polemic with a firm, immovable stance. It’s just one that really knows what sacrifice looks like, and that, sometimes, sacrifices are made in vain. 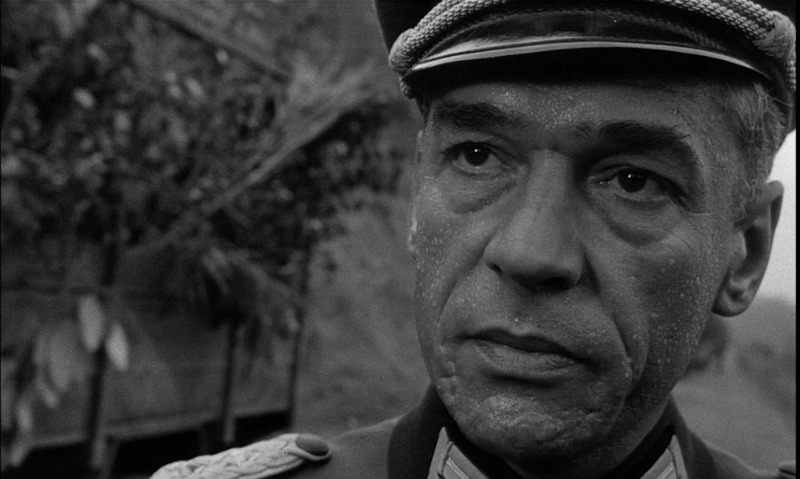 As we’re only let in on a nugget or two of how Labiche and his men plan to stop the train, much of the thrill of the film comes purely from watching them execute it. Their faces tell us when something has gone wrong, or when fortune suddenly shines. Lancaster is incredibly game for the physical demands of the role, doing most – if not all – of his own stunts, performing labor on the tracks and engine parts himself, climbing through windows and up mountains, and jogging across potential battlefields. He was an acrobat before his career as an actor, and this is an exceptional look at how he married the two. He moves beautifully, gracefully, his body an extension of that gorgeous voice. Those powerful forces can work in concert to create calm, so to see him – this force of nature – anxious puts his audience instantly on edge.

Before The Train, Frankenheimer shot a pair of paranoid thrillers – The Manchurian Candidate and Seven Days in May – and would immediately thereafter make Seconds. This war picture seems out of place in this group, but the way Frankenheimer draws tension ties them together. The oppressive, unending sounds of the vehicles themselves – that chufgh…chufgh…chufgh as an engine sits stalled during the final showdown – paired with the constant uncertainty as to how much the Nazis know at any given moment lends this an air of the paranoid and conspiratorial. The black-and-white photography, wide-angle lenses, and canted angles make every possible avenue of escape seem impossible. 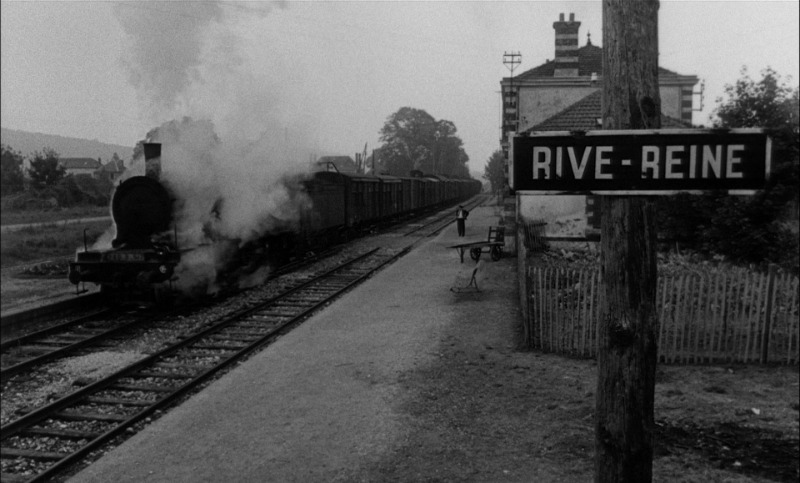 The Train has perhaps never looked better than the transfer now available on (Region B locked) Blu-ray from Arrow Video. This is a high-contrast transfer that nevertheless makes a lot of use of the grays, delivering a very pleasing palette in a very crisp image. It gets a little overly compressed here and there – specifically noticed this during Michel Simon’s final scene – but mostly really does a nice job of getting all the detail in there. So many blades of grass, the sensation of the steam in the air, and all the texture of the train yard look spectacular. The film is presented in its original aspect ratio, 1.66:1. (screencaps courtesy of DVD Beaver)

Arrow has stacked the release with a rather sparse commentary track with Frankenheimer (some solid production anecdotes amidst a lot of dead air and repeatedly pointing out how much action he could get in a single shot); a really excellent overview of Lancaster in the 1960s (with biographer Kate Buford as the host); a cool archival French television report on the making of the film with, featuring interviews with locals who worked as extras; a short interview with Simon; footage from the film’s premiere in Marseilles; and a great booklet featuring an essay by Sheldon Hall and excerpts from contemporary reviews. The film was not hailed as a major film upon release, and disappointed at the box office, but it was a big deal in France and has gained a considerable reputation in the years since. Cheers to Arrow for making the film available on Blu-ray, not only for those in the U.K., but for those of us in the U.S. as well who missed out on Twilight Time’s limited edition.

Written By
Scott Nye
More from Scott Nye
Murnau's final German film is the culmination of his accomplishments to that...
Read More