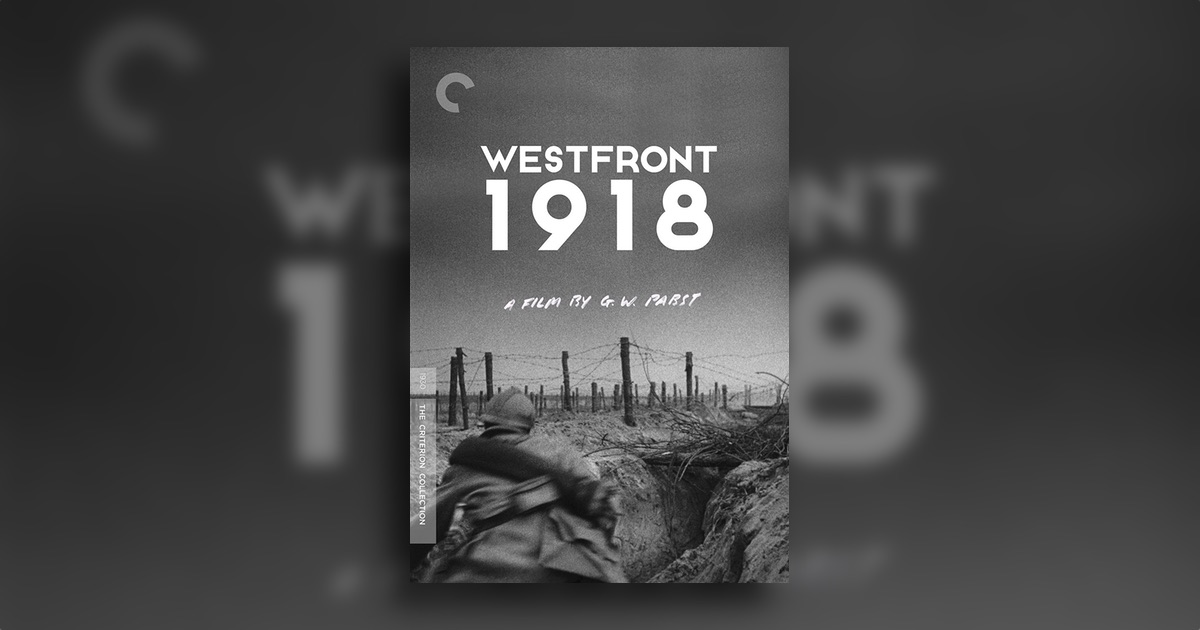 Released just a dozen years after the events time-stamped in the film’s title, Westfront 1918 offers a grim perspective on the experience of German soldiers in the final months of World War I. Adapted from a wartime memoir novel by director G.W. Pabst, best known in recent times for his silent movies starring Louise Brooks (Pandora’s Box and Diary of a Lost Girl), this early sound film offers an episodic narrative based around a series of anecdotes that ring very true to life for anyone who’s taken the time to read up on the terrifying anguish and unfathomable chaos of trench warfare.

Utilizing an approach that’s been repeated innumerable times over the decades, we encounter four men and track along with them as they each do their best to survive the ever-unfolding madness that surrounds them. The Lieutenant is, of course, the nominal officer of the quartet, though he’s hardly portrayed with any of the aristocratic panache familiar to viewers of Renoir’s Grand Illusion. Another character, known only as the Bavarian, functions as the representative of career soldiers, stout men of sufficient brute strength and lacking any qualities that reek of sophistication, content with their fate of carrying out orders, surviving to fight another day, and helping the new recruits wise up a bit to the ways of war before launching themselves once again into the fray. A third member of the troupe, referred to simply as the Student, acts out the part of that wet-behind-the-ears youngster who’s been conscripted and sent to the front lines well before he’d been adequately prepared for the task, pressed into duty by a desperate war machine that senses the end of the unwinnable campaign is near, yet still too proud and arrogant to submit the inevitable surrender. Finally, there’s Karl, the most well-rounded and admirable of the four, presumably the guy that most men in the audience would be drawn to identify with and admire, if their own station in life doesn’t match most closely with any of the other three. Karl’s story is the one that gets more individual attention than his comrades, as we get to accompany him on a seemingly fortunate leave of absence that allows him to return home, only to discover a harsh intrusion of human fallibility when he crosses the threshold of his humble urban apartment.

While the tragedies that befall each member of the group give Westfront 1918 the emotional heft to leave a lasting impact on empathetic viewers, it’s really the bleak evocation of the desolate wartime landscape that burns its most powerful impression into the memory bank. By today’s standards, and even in comparison to films shot just a few years later, Pabst’s technical skills seem fairly crude, with a lot of static shots and significant gaps of relative silence to remind us that this is a rather old film. But in some ways, that simplicity also works to the movie’s advantage, as it allows the moments where Pabst employs swift moving tracking shots shuttling over the trenches, or furious outbursts of erupting shells and the clattering clumps of rock and soil as debris hits the ground, to rouse our senses all the more.

The film premiered in Germany just a month or so after a better-known title, All Quiet on the Western Front, made its debut in Hollywood, so it seems almost certain that the movies were parallel productions with very little chance of influencing each other, except for the likelihood that their respective production teams probably knew that similar events were being staged on separate continents, to tell closely connected stories of the intractable suffering and misery experienced by the pitiful men enlisted to endure the living hell ordained by European masters of war.

The nearly simultaneous release of the two films, and the overall interest of studios in creating such cinematic spectacles depicting the recently concluded “War to End All Wars”, should be regarded not so much as a pure coincidence as it was a mutually recognized opportunity to offer audiences something new – a broad-scale depiction of battlefield action, complete with the disorienting percussive impact of an audio soundtrack. By 1930, the technology of sound recording had advanced to the point that ambitious directors could begin to envision how the noise of explosions, the whistle of incoming mortar shells, and the screams and curses of soldiers under siege could augment the harrowing impact of violent imagery.

The two films referenced above were the very first efforts to satisfactorily immerse viewers into an audio-video simulation of the nightmare environments of World War I combat. Their depictions of a barren corpse-strewn, cratered and barb-wired wasteland would go on to set a template for future realistic depictions of military conflict. Wooden Crosses, a French film from 1932, would enter into this same no-man’s land setting a couple years later, and each of this early trilogy of WWI classics can rightfully regarded as a formative influence on Stanley Kubrick’s masterpiece Paths of Glory that came out a quarter century later. In the case of Westfront 1918, the most poignant parallel with Paths of Glory arrives in the form of an extended music hall scene featuring a female singer performing solo on stage for an audience of extremely thirsty men enjoying a brief respite from the front lines. While the sequence isn’t milked for pathos nearly as extensively or as exquisitely as Kubrick chose to do, it remains a very effective interlude, with a few other musical comedy bits included in the passage in what seems another effort to take advantage of the audio recording capabilities that were still something of a novelty at the time.

Overall, I find myself quite favorably inclined toward films of this kind – unapologetic pacifist remonstrances that portray the futility and depravity of war from points of view outside of the traditional Hollywood angle I grew up on – and this particular example is an important, admirable example of the genre. Of the four movies I’ve referenced in this review, I’d put Westfront 1918 ahead of All Quiet on account of its grittier portrayal and relative lack of sentimentality, but behind Wooden Crosses in its ability to forge a strong emotional connection with the doomed central characters, and decidedly inferior to Paths of Glory which stands above all four of these films in its production values, impactful performances and incisive critique of the power structures that have thus far condemned humanity to repeatedly act out these horrible corrupt scenarios far too often than can ever be morally justified.

Still, don’t take that as a knock against Pabst’s achievement. Westfront 1918 is an important, compelling film and a landmark in the evolution of cinematic portrayals of large-scale combat. Its eventual censorship by the Nazi government that took over Germany just a few years after this film and its 1931 companion piece Kameradschaft (also just released by Criterion, which I haven’t seen yet), also speaks eloquently on behalf of the essential truth of Pabst’s message here. One of the supplements on this disc, a televised discussion from 1969 of French and German WWI vets who watched the film then talked about it afterward (basically, one could consider a video podcast session), also testifies to the accuracy of the depiction. Their still-vivid memories from 50 years on stir up some lively exchanges and add a lot of value to the disc for anyone seeking to enhance their understanding of why wars happen and how they affect their survivors, in particular those enlisted to put their lives directly on the line. Other supplemental shorts offer valuable insights on the historical context, the making of the film, and in this instance, a fascinating restoration demo. All in all, even though it feels a little out of order to have these two new Pabst releases available on Blu-ray while The Threepenny Opera remains a DVD-only title and Pandora’s Box lingers in OOP limbo, Westfront 1918 is another highly commendable effort on Criterion’s part to bring us a beautifully restored and previously hard-to-find masterwork that fully deserves a renewed burst of attention.