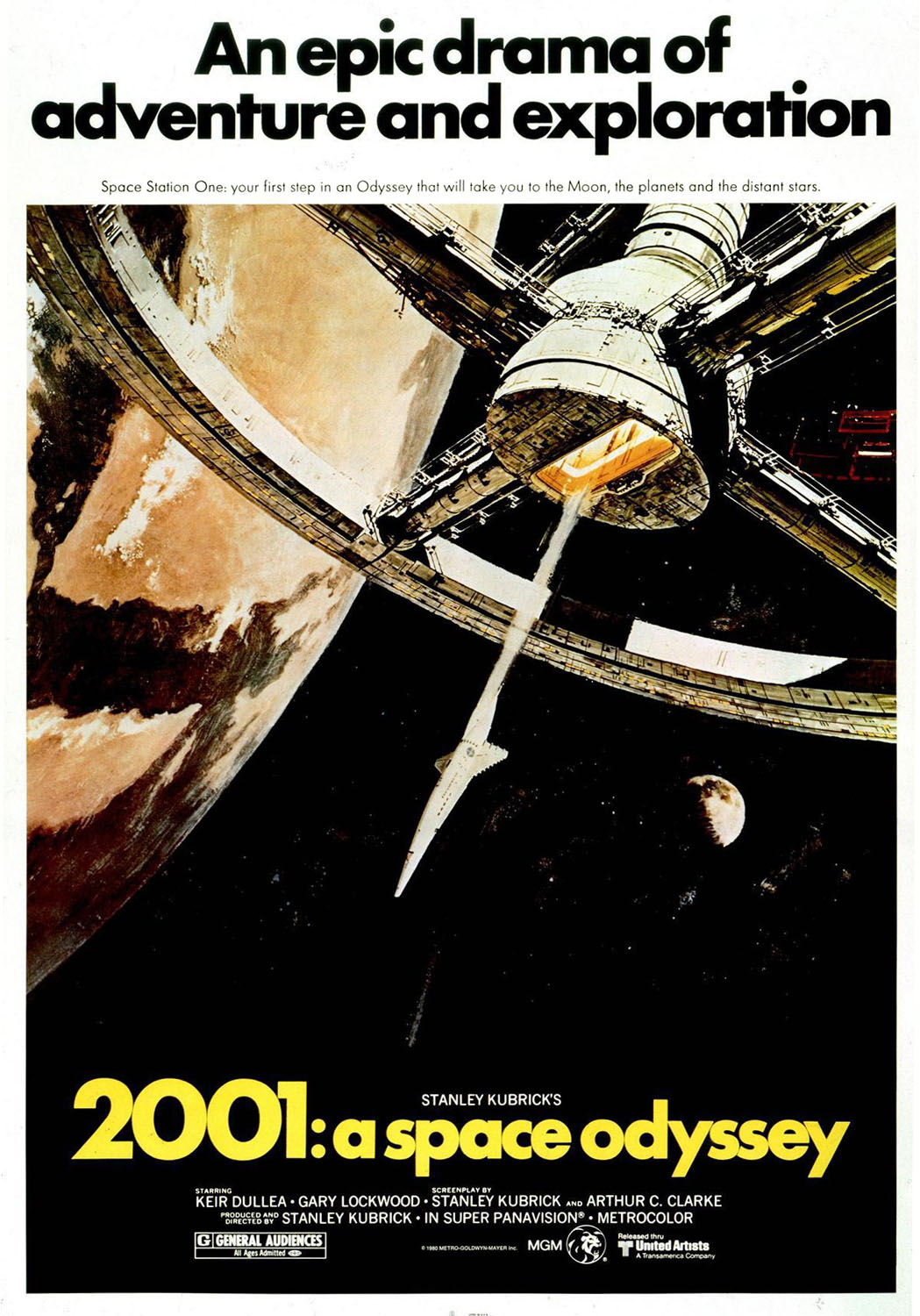 My quick take on 2001: A Space Odyssey is that, after carefully rewatching the film and reading a fair amount about it over this past week or so, I arrived at the conclusion that it’s my favorite movie of all that have ever been made. I have said the same thing in the past, but that was many years ago, long before I had become familiar with so many classics of world cinema and Hollywood’s past that preceded my birth. My deep immersion over the past decade into a self-directed study of film history led me to temporarily suspend judgment on so momentous a question as what I consider to be “the greatest film ever made,” but now I’m pretty comfortable with saying that it’s this one, without any doubt on my part. That’s subjectively speaking, of course, since the debate can never be definitively, authoritatively settled. But 2001 is the number where I’m willing to put down my chips and make a declaration. I’ll make the case below, perhaps not exhaustively or with a serious intention of persuading the skeptics or others who might disagree. But in quick summary, I just love everything about this film:

This is a masterpiece that speaks to me in so many ways, and brings me fresh feelings of delight every time I encounter it again.

The making of 2001: A Space Odyssey was already a subject of great interest well before the film had been released. Stanley Kubrick’s previous film Dr. Strangelove (soon to be re-issued in a new Criterion edition) had been a commercial and critical hit in 1964, and it was apparent that his bold and singular talent warranted close attention. A press release in February 1965 announced that Kubrick would partner with noted science fiction author Arthur C. Clarke to shoot a film titled “Journey Beyond the Stars,” set in the year 2001. The timing for a serious, big budget film treatment involving exploration of the solar system could not  have been any better, as the NASA space program was ramping up its efforts to fulfill the ambition of the slain US President John F. Kennedy to put a man on the moon by the end of that decade, and for the most part, the American public was enthusiastically on board with the project.

As a genre, science fiction was still locked in a stereotype of cheap drive-in fare, B-movie silly kid stuff as far as most film studios were concerned. But the development of rockets that routinely ascended above the atmosphere, carrying men safely into orbit and back home again, piqued the nation’s curiosity about just how far this new mode of transportation would take us. Over the next few years, Kubrick and his cinematic work in progress were the focus of stories in Look and The New Yorker magazines. A 1966 documentary titled 2001: A Space Odyssey – A Look Behind the Future gave viewers an enticing glimpse into what Kubrick, Clarke and their crew had in store for them when this lavish, expensive and groundbreaking production finally hit the big screen. The collaboration promised to offer more than just an informed speculation on how astronautical science might progress. It would press even further into the moral and philosophical implications of humanity’s expanded awareness of the vast universe that they inhabited.

A pocket-sized paperback book titled The Making of Kubrick’s 2001 (edited by Jerome Agel) was the first of several successively more expansive volumes written over the years dedicated to gathering up a generous sampling of the textual and photographic records of its production. Published in 1970, it’s a wonderful archive of first responses to the film, along with the requisite behind the scenes anecdotes and trivia. Dozens of reviews are included, either in full or (more often) in salient excerpts, some by prominent critics of the time, others by ordinary viewers from all different walks of life. Among the scattered outbursts of feverish adulation, a few indignant requests for refunds or other scathing insults, and several thoughtfully rendered interpretations from viewers eager to receive feedback from the master Kubrick himself (which he generously provided in at least a few instances), here are a few samples that struck me as particularly interesting due to the enduring fame and reputation of the person being quoted:

I’ll post a few other extended reviews included in the book in the Links section below, though the selection is dependent on what I can find on the web. I highly recommend this paperback though for anyone as fascinated by this film as I am. I was fortunate to find a copy at a library clearance sale for fifty cents. It runs closer to $20 on the secondary market on Amazon.

The diversity of admiring praise and sneering derision that we see in the quotes from famous people was likewise matched by the opinions of the general public, though after the film began to establish its audience of loyal supporters and repeat viewers, a notable skewing of the audience toward the younger and hallucinogenically-oriented end of the demographic spectrum was easily observed. MGM’s marketing scheme veered away from the more straightforward appeal of a futuristic quest modeled after the ancient epics of old (the “Odyssey” reference, obviously) and toward those who would be drawn in by an experience of “the ultimate trip.” 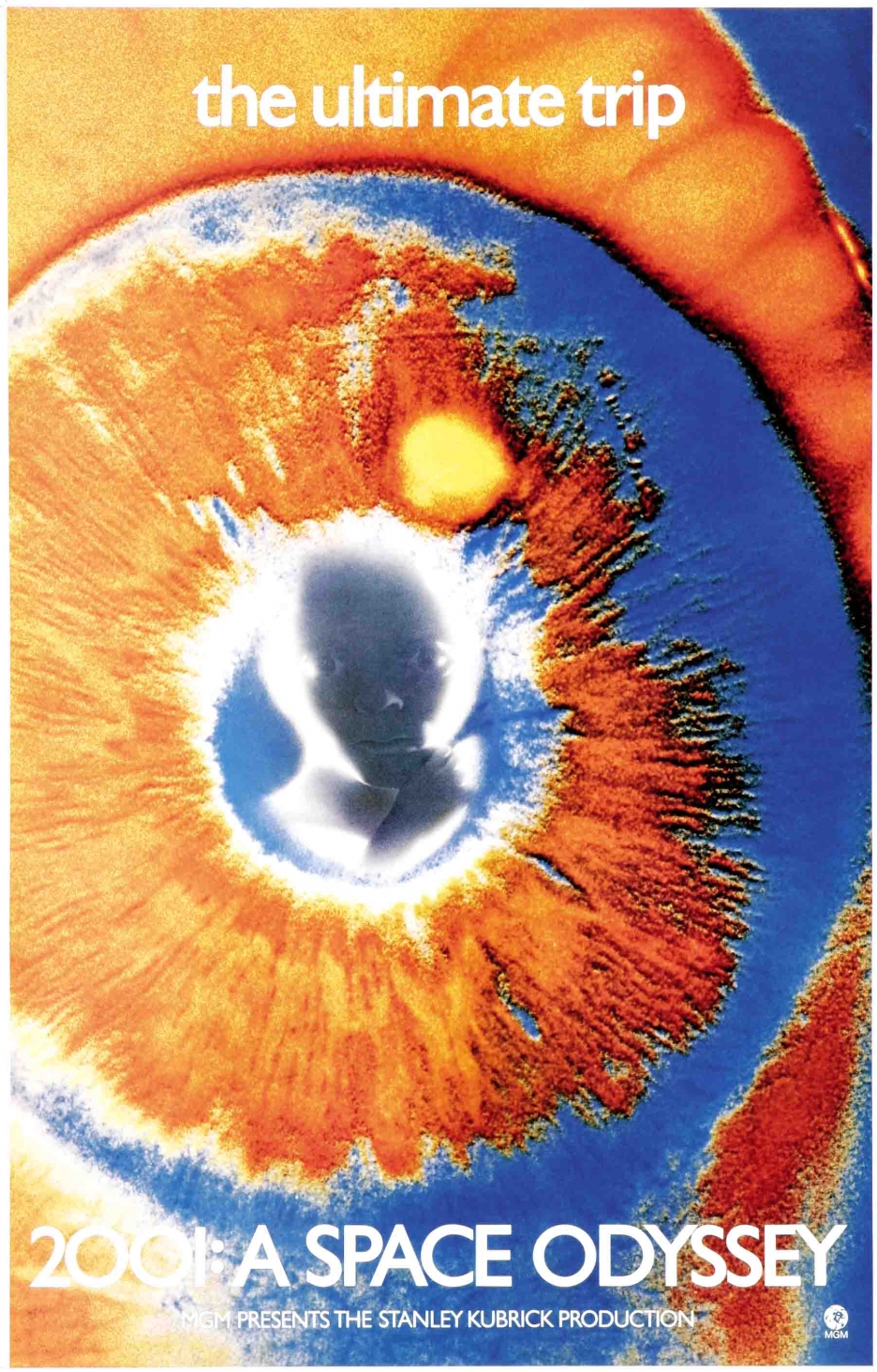 To get a very personal insight on how 2001: A Space Odyssey speaks to me today, I recommend that you give a listen to the full-length solo commentary track that I recorded on April 30, 2016. I went into my first ever solo podcasting session pretty directly, without a great deal of planning, just an impulse to watch the film on Blu-ray at home and speak into a microphone to capture my thoughts as they occurred. I’m satisfied with how it turned out, even though just focusing on the immediate business at hand as the movie plays out doesn’t always allow me to offer a more expansive take on some of the big ideas that Kubrick (and co-writer Arthur C. Clarke) raised in the film. I suppose that I could do so here in writing. I have this feeling of much that still remains unsaid, of inspirations I get from watching 2001 that I haven’t sufficiently expressed in this essay, though I’ve touched on quite a few of the topics that rev me up and put me in touch with that rare multi-sensory grandeur that fine cinema is uniquely capable of delivering.

Kubrick’s vast visual symphony truly does create a space for ecstatic personal introspection as we become more familiar with its cavernous contours, and his decision to dispense entirely with dialogue for long stretches of the movie was crucial. I’m sure he realized just how magnificent his carefully constructed images would be, and that too much human chatter would only serve to distract us from the vistas he would have us behold. The speculative elements of the cosmic story represent an intelligent, educated but ultimately fanciful guess as to where we came from and where we’re going. It’s best not to take all that too seriously, just as it’s absurd to find fault with Kubrick’s overestimation of how rapidly the space program would progress in its ability to put human bodies into extraterrestrial realms. What Kubrick and Clarke get right here is found in their ability to depict our existential solitude when the human journey reaches its ultimate limits, and the inevitable failures that we’re bound  to experience when we rely too much on the tools that our ingenuity has designed to make the universe a little easier to control and a bit more convenient in meeting our needs.

I suppose that’s enough for now. Rewatching the film again this past week just adds one more chapter to a series of enthralling experiences that I’ve enjoyed at different stages of my life, beginning in my childhood, and accompanying me through the decades into my adult years. This current revisit of the film has only tightened the bond that I established with 2001: A Space Odyssey back in 1968, when my dad took our family to see it in Detroit in a theater equipped with the Cinerama screen. I was all of six years old. Years later I watched it on VHS as a young adult (pathetically butchered, I’m sure, but I was still awestruck), and with my kids on DVD in the 1990s as they squirmed in terror, their innocent young Nintendo-loving minds grasping for the first time the dreadful homicidal potentials that computers might unleash if their programming becomes too autonomous. 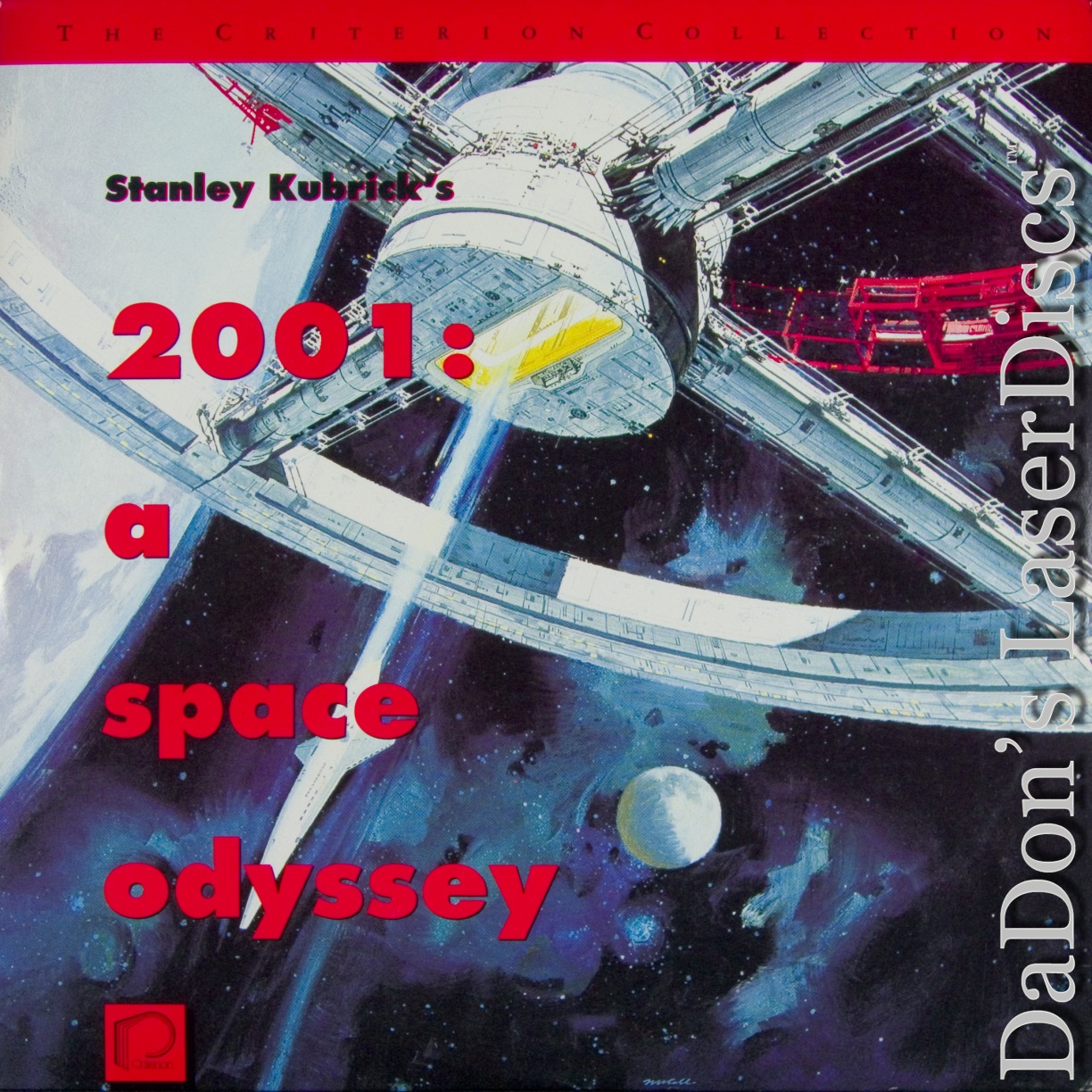 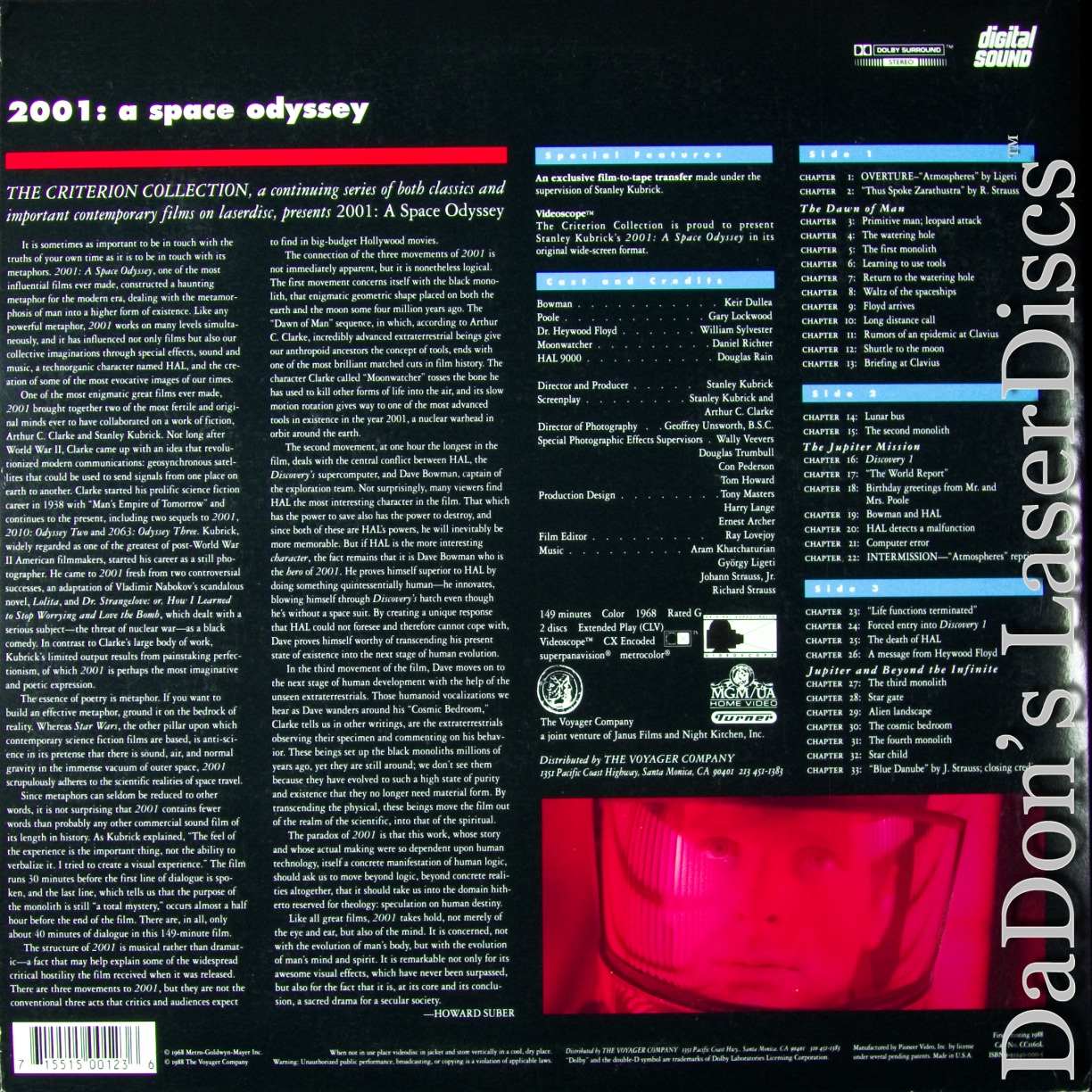 More recently, I’ve watched it on Blu-ray and in theatrical settings  with friends, and alone in my home theater “just because,” well before it came up in my blogging queue. And now, I’m just glad that 2001: A Space Odyssey has a Criterion connection, as LaserDisc #60, released way back in 1988. It gave me the perfect excuse to immerse myself in this vision of Reality once again, and I’d love nothing more than for Criterion to get the rights back some day. And if the circumstances of my life allow me the opportunity to watch this epic drama, this ultimate trip one last time on my death bed, as I stare at the wide black screen, the monolith tipped on its side, I would consider myself a fortunate man to bring that lifelong relationship full circle. And of course I’ll be reaching out my hand and pointing at it when I do.

This is just a small sampling of many great essays and podcasts that have been composed on the subject of the film. Please feel free to recommend links to other worthy sources in the comments! I may add more here as I discover them.