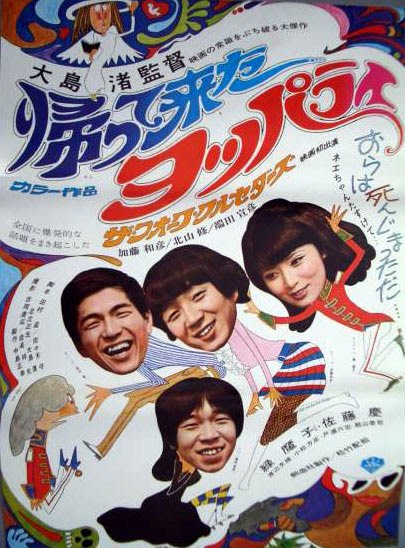 Three Resurrected Drunkards comes across as what Nagisa Oshima might have considered a breather in the midst of his insanely prolific run of the late 1960s. Cobbled together between his more ambitious projects Death by Hanging and Diary of a Shinjuku Thief, this is inarguably a minor work that probably has a bit more prominence than it otherwise deserves due to its inclusion in Eclipse Series 21: Oshima’s Outlaw Sixties, where it holds the virtue of injecting a bit more levity into what is an otherwise thematically hefty set.

Not that Three Resurrected Drunkards should be regarded as an altogether lightweight romp. The film follows a trio of three young men, in real life members of a Japanese pop group called The Folk Crusaders, who become victims of mistaken identity when their matching Beatle-esque outfits (circa Shea Stadium ’65) are swiped and replaced with Korean military uniforms by a mysterious hand emerging from beneath a sandy beach while the boys are frolicking in the waves. Now seen as refugee army deserters and illegal immigrants, the guys find themselves experiencing the downside of anti-Korean racism as expressed and practiced by the broader Japanese populace.

Ethnic tensions between the two nations were a persistent theme in Oshima’s work of this era, and in this film, his technique veers toward the ludicrous and surreal, as around the halfway point of this short (80 minute) movie, the story seems to repeat itself as early scenes are recreated with slight variations. The most enduring impressions left by the film are made by Oshima’s prolonged and remarkably contemporaneous meditation on a famous Pulitzer Prize winning photograph and an aggravatingly infectious earworm theme song that recurs throughout the film that you can hear in this clip of Three Resurrected Drunkard‘s opening moments.

As mentioned above, Oshima was intently focused on issues of the moment when he wrote, shot and released Three Resurrected Drunkards in the winter of 1968. Just consider that the Saigon Execution photograph was taken on February 1 of that year. This film was released on March 30. Not even two full months had passed before it hit the theaters! While Oshima may have had some of the ideas for this work in mind before he incorporated the Adams image into the narrative, its crucial place in the film’s structure testifies to just how nimble and attuned Oshima was to current events.

Now having said that, I don’t think that this was a noteworthy financial success or major artistic statement for Oshima. The rapidity and simplicity of its execution likens the film to something more along the lines of an essay or blog post, in today’s terms. So whatever shortcomings viewers then or now might attribute to the movie, I think it’s fair to read it with the kind of charitable allowance one might extend to a magazine article written on short notice, as an effort to capture the mood of a moment, the spirit of the times. (If you know the face you’re looking for, you can also catch a brief glimpse of Oshima himself toward the end of this clip).

I’m taking it pretty easy for this particular review, since I’ve already done more diligent work studying up on it for a podcast recorded last February (with Trevor Berrett and Aaron West joining me for a discussion of this and several earlier Oshima films on The Eclipse Viewer podcast.) Prior to that, back in 2011, I published a more detailed review as part of my Journey Through the Eclipse Series, back when I was an Oshima noob, which I think still holds up adequately enough to speak for me in 2016. If anything, I’m even more impressed by what I’ve learned about Oshima over the intervening years, and I’m genuinely excited to see what he did in his next several films, as yet still unavailable on Region 1 discs of any sort, but happily awaiting me on Hulu when I get to that point in my timeline, just a matter of weeks and months from now if all goes well. I’ll dig deeper on titles like Diary of a Shinjuku Thief, Boy, The Man Who Left His Will on Film and The Ceremony.

The story behind Saigon Execution

The Folk Crusaders on video: