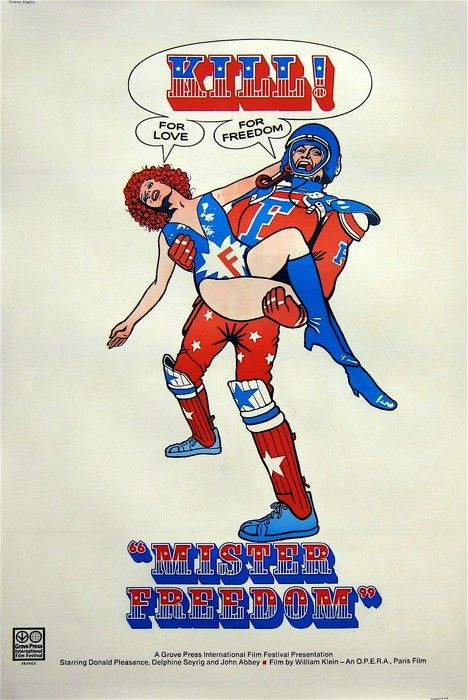 Mr. Freedom begins with a wail of sirens as Chicago cops swarm in to crack the skulls of rioters and looters. It ends with a catastrophic explosion that levels a city block in Paris and mutilates the body of the movie’s titular hero. In between all that, against a backdrop of Cold War intrigue and superpower paranoia run amok, we see scenes involving overt racist mockery, rape as a spectator sport,  sacrilege, poisoning, prostitution, assassination, the sexist degradation of women and a pervasive attitude of unmitigated cynicism and ridicule toward the aspirations of the USA as a bulwark of liberty, democracy and decency against the forces of tyranny and oppression around the world. All the necessary ingredients for a robust satirical take-down of good old fashioned patriotism, American-style! The politics are radical, the humor is often guttural, and the disjointed story line is mostly incomprehensible – but it’s all for laughs! And also to reinforce a very bitter, disillusioned point put forth by the film’s director, writer, and set designer William Klein: that the state of the American Dream at the end of the 1960s was more flimsy, corrupt and brutal than any of its supporters either knew or were bold enough to admit. Pretty intense stuff, for a garish, brightly colored super-hero comedy romp featuring inflatable puppets and a goofy old dude in a red foam jumper body suit as arch villains.

Invoking the phrase “super-hero movie” over the past two decades or so, after Hollywood started investing hundreds of millions of dollars into creating state-of-the-art entertainment spectacles, conjures up a different set of ideas than what it would have back in 1969-70. Consider the mentality of the contrasting Batmans presented by Adam West and Christian Bale, for example. When Mr. Freedom made its limited initial run through the independent and underground theater scene, the film was first shown in France in January 1969, in the aftermath of the French student uprising and several other disruptions that roiled Europe the year before. It didn’t make it over to the States until it was imported by Grove Press as a foray into the world of indie film and released in March 1970, a little over a year into the presidency of Richard Nixon, and I figure that some of the issues dealt with in the film already felt a bit outdated by then. Vincent Canby’s pan review, linked below, indicates as much.

This garish, cartoon-like production was obviously made on a low budget. The hero’s costume is constructed from brightly painted sports equipment, which probably served to lampoon the jock mentality and locker-room pep talk delivery of the protagonist as he spouts his propagandist slogans to eager audiences accustomed to eating up such drivel. Counter-cultural heads of that time, hip to the latest developments of revolutionary activism happening throughout Europe and North America, would have quickly recognized Mr. Freedom’s jingoistic braggadocio as just a slightly amplified version of the rhetoric put forth by the American right wingers who sought to justify the war in Vietnam and any number of other repressive measures taken to protect the nations of the world from the ravages of godless Communism. And in keeping with the gaudy, orgiastic aesthetic of its era (that Klein himself had influenced and in many ways mastered), the film serves as a pastiche for all kinds of ideas, many of which fall flat in comedic terms but still create impact as howls of protest or simply in terms of inspired weirdness, the likes of which we rarely see in movies of more recent vintage.

Fans of the art house cinema can find plenty to enjoy in the offbeat performance of Delphine Seyrig, most famous for her glacially elegant posturing in Last Year at Marienbad (from early in her career) and her devastatingly powerful portrayal of Jeanne Dielman (coming soon to Criterion Blu-Ray.) Here she appears to have a lot of fun cutting loose and showing off a sexy and playful side that I haven’t quite picked up on in those films or the handful of other appearances she makes throughout the Collection. John Abbey is a perfect All-American lout, strutting, flexing and bellowing out his bromides with convincing arrogance. I was also amused to learn that he’s the same actor who shows up next to Monsieur Hulot in the corporate waiting area in Playtime, primping and preening himself and checking his briefcase with supreme self-importance for a few moments after taking his seat, before being ushered into a very important meeting.

Aside from those two leading actors, the rest of the cast provides a fun scattering of cameos and uncredited appearances, presumably friends of the ex-pat Klein who were happy to ham it up a little in what looks to have been a pleasantly raucous party throughout the shoot. Look for familar faces like Yves Montand, Simone Signoret, Donald Pleasance, Sami Frey, Serge Gainsbourg, Phillipe Noiret and a few others.

I first wrote about Mr. Freedom back in 2010, when I was just a fledgling blogger on this site, early on in my Journey Through the Eclipse Series. A few years later, Trevor Berrett and I discussed the film on our Eclipse Viewer podcast, when we covered Eclipse Series 9: The Delirious Fictions of William Klein. (This movie is also available to watch on FilmStruck’s Criterion Channel.) My mixed take views on the film haven’t changed much over that span of time – it’s brilliant at times, but overplays its hand too bluntly to earn my full endorsement. In both the review and the recorded conversation, I draw connections between the absurdity and ignorance of the diatribes we observe on screen and the political tensions of our current era. Back in 2010, the application could be made to the rise of the Tea Party movement. In 2014, Barack Obama had already been re-elected, but the political battle lines were still highly charged and sharply defended by partisans on both sides.

Rewatching the film now, in early 2017, I find myself feeling depressed as hell that the United States chose as its president a guy like Donald Trump, who unwittingly presents himself as the contemporary descendant of Mr. Freedom, now aged to a ripe suitability (in the eyes of a crucial segment of voters, anyway) as the big boss dude  best suited to manage America’s interests. As we’ve learned over the past year or two, Trump is quite capable of engaging with the 21st century equivalent of the buffoons in the audience who were so easily whipped to a frenzy by the uber-patriotic hero’s exhortations.

Now as I once again listen to Mr. Freedom‘s last ditch appeal to the French populace he’s seeking to pacify and liberate, it’s all too easy for me to imaging President Trump uttering these same words in an ominous ultimatum to the American society he currently seeks to rule, and to the world over which he looms over as a potentially abusive and precarious adversary:

I speak to you as a friend. You suffer, I suffer. You cry, I cry with you. And yet, at the same time, I rejoice, for it is in suffering we are born, and our alliance will be born. The steel of our friendship will be forged in fire, and tempered in blood. I give you my solemn word. Everything that I have destroyed, I will rebuild, better than before.  You want peace, we want peace. But your leaders do not want peace! I grant you a 24 hour truce. I beg you, for your sake, and for mine: don’t force me to go all the way. Help me, and I’ll help you. Amen.

I can only hope that the demonstrable ineptitude of Trump’s administration so far, and some cohesive obstacle of social resistance established both here and abroad will prevent him from doing the kind of damage, both short and long term, that his present position on the world stage would otherwise enable. It’s just a bummer that our society would allow such demagoguery to flourish at the highest level, and it embarrasses me that as a middle aged white guy living in suburbia, I fall squarely in the demographic that elected this clown. (Today as I was taking a walk through a park in my neighborhood, a multi-ethnic group of teenage boys playing basketball started laughing and yelling “Make America Great Again” in my direction. It wasn’t until after I had strolled past them that I realized they were assuming I was one of those guys. It made me feel sad to be stereotyped that way! But I could understand why…)

Regrettably, I don’t have a clever or uplifting note to end on here.  I’m simply left to admit that contemplation of the fact that a real-life Mr. Freedom has gotten his mitts on the actual Big One saps my creative enthusiasm at the moment. I wonder what William Klein thinks about this project of his after all this time. It feels like his message just never got through, or it got drowned out by the very voices he was trying to warn us about. I guess that’s the drawback of preaching to the choir.

Next: Criterion Reflections – The Next Phase!