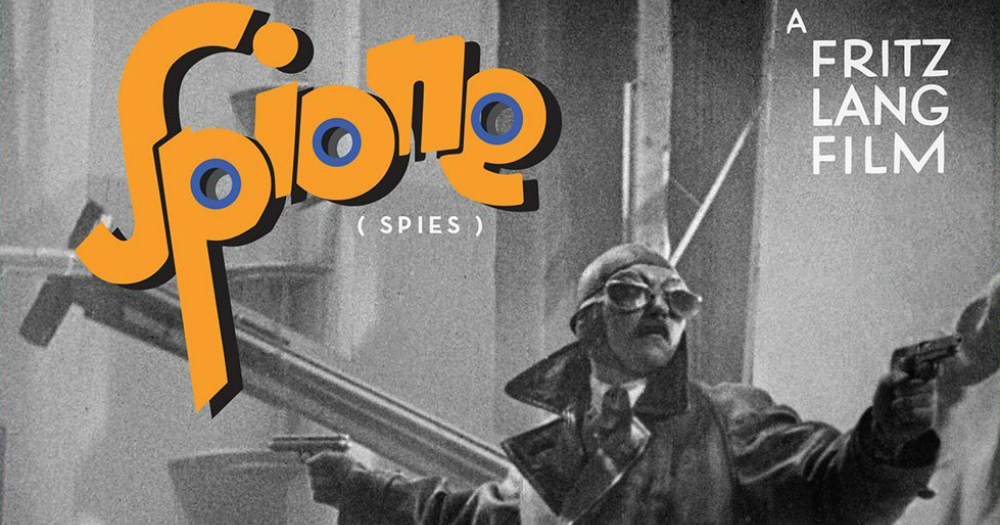 There is a small (but quite strong) contingent of people for whom “a Fritz Lang spy movie made in 1920s Germany” will elicit an uncontrollable gasp of excitement. Over the course of seeing and reviewing several of Lang’s silent films for these very pages, I have become one of those people. We (and by “we,” I mean “I”) have come to expect from Lang certain things including a striking clarity of purpose and an ability to tackle genre in a way that feels completely elemental and familiar, yet also bold and new. And even in the 1920s, the spy film was practically a staple of the medium. Adventure serials like Les Vampires and Fantômas, as well as Lang’s own two-parters, The Spiders and Dr. Mabuse, der Spieler, traded heavily on espionage practices in the course of the adventure.

Spione (1928), too, despite its name (in English, “Spies”), is more a crime saga than a globetrotting, James Bond-style adventure. Lang cranks the archetypes way up, disposing of as much character and backstory as possible in the name of servicing his crackerjack plot and relentless thrills. He famously described Spione as “a small film, but with a lot of action,” but the size designation is only one of scope. He’s not imagining the future, as he did the year prior in Metropolis, nor traveling to the moon, as he would a year later with Frau im Mond. But his imagination is as fertile as ever. 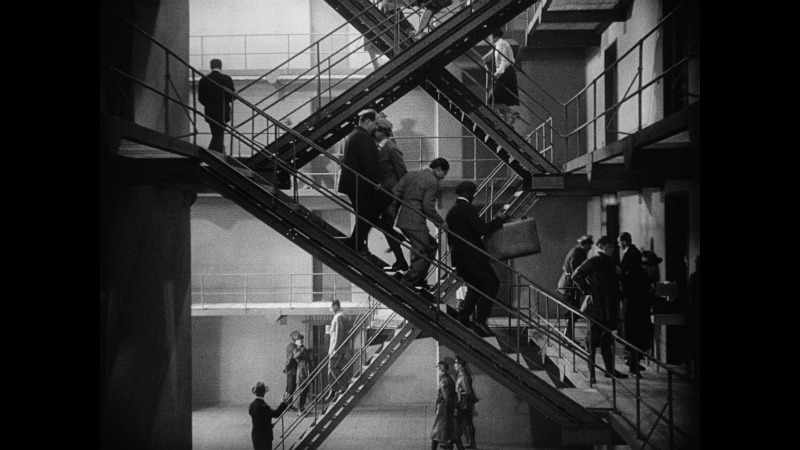 So you have the players – the ingenious young agent, known only as Number 326 (Willy Fritsch), who falls in love with the beautiful spy, Sonja (Gerda Maurus), who unbeknownst to him works for the criminal mastermind he’s trying to capture. That man, Haghi (Rudolf Klein-Rogge), poses as a bank manager, but in fact uses his office to conduct an elaborate espionage ring…for evil! We don’t know what drives any of them. We don’t need to. They’re too good at their jobs to do anything else anyway.

A lot is accomplished just in the casting. Fritsch was on the rise as one of the biggest stars in Germany, and his affable presence had already proved a major success with audiences. His wide grin, malleable face, and sparkling eyes draw us in, our sympathies naturally aligning with whatever cause he might chase. Klein-Rogge had essentially built his career around playing villains, having already served that role in The Cabinet of Dr. Caligari, Dr. Mabuse, and Metropolis, among others, his sharp features and beady eyes (built into an imposing frame) giving plenty of reason for distrust. Maurus, on the other hand, was making her feature debut,perhaps best for a woman of whom the audience has to be wary. But, man, one look into her eyes, it’s easy to see how Sonja could draw so many men into her trap. Lang would exploit this otherworldly quality twofold with Frau im Mond, but the traces he finds in Spione make her into the kind of woman who easily sees her bidding done. She’s transfixing. 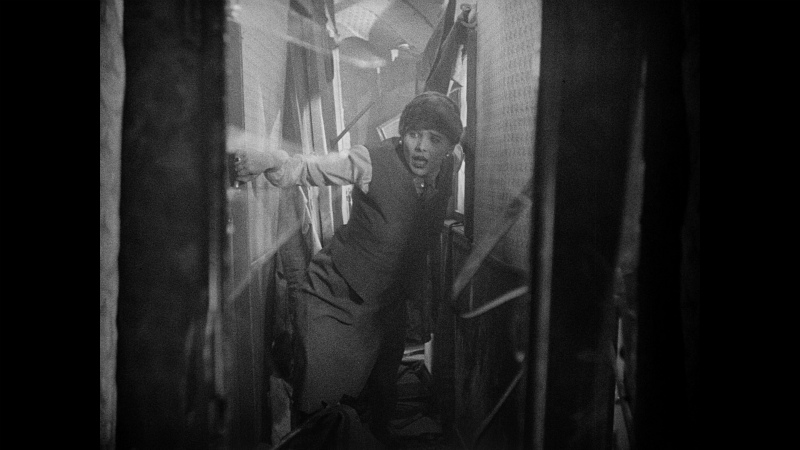 Lang cowrote the screenplay with Thea von Harbou, his wife and creative partner throughout this period. Harbou concocted the story herself, and wrote a novel version alongside it. Her version reportedly played heavily on a Soviet angle, adding a political dimension not unfamiliar to Lang, but virtually absent from this film. Spione doesn’t even name the city in which it takes place. Its art deco corridors and glamorous buildings stand purely for themselves. Much of the praise surrounding German expressionism is centered on how fantastical a world it created, but even here, with Lang aiming for “realistic photography,” there’s something unreal. There’s a sense in which everything still looks a little bit like a set. Rather than chip away at the tension of the story, though, it heightens it, as though this manufactured world is in some way reflecting the constructed world Haghi has built for himself – impenetrable at first glance, but ultimately destructible.

Masters of Cinema presents this world on (Region B locked) Blu-ray in a sparkling restoration from – who else – the truly great film preservation house Murnau Stiftung, who has provided the masters for most (perhaps all) of the classic German films MoC has released. This isn’t quite as impressive as, say, Frau im Mond, but it is still absolutely stunning, dimensional and textured and so very crisp. There’s still a good deal of damage, natural to a film of its age, and the odd shot here or there is a little on the flat side, but these are the exceptions. There is a chase sequence near the end, driving past some trees, that would be a messy, blurry nightmare in most transfers. Here, each leaf retains its identity, even as the camera goes flying by them. It’s remarkable, gorgeous, and really helps to convey the tension with which Lang imbued the film.

We get two options for score; one by Donald Sosin, the other Neil Brand. The Sosin is the more initially impressive, utilizing a more orchestral sound, and has more dynamic sections to it than the purely-piano Brand, but the latter isn’t too shabby itself, and is more consistently engaging, as the Sosin leaves a few passages in near-total silence. To each their own and all, but I appreciated the Brand more. 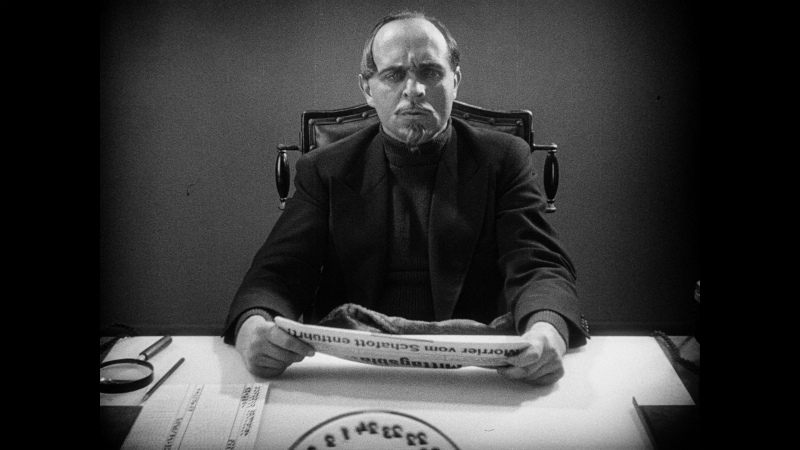 On the supplemental side, we get a spectacular 69-minute documentary on the history of the spy genre in German cinema, and the development and release of Spione. Who would think we’d get such a detailed look at what is now a relatively minor note in Lang’s career? What a dream. The documentary is in German, with English subtitles. The accompanying 40-page booklet includes equally stellar essays by scholars Jonathan Rosenbaum and Murielle Joudet, both of whom take fascinating critical takes on the film and Lang. I really appreciate when MoC includes more than one essay, as they often seem to speak to one another, agreeing on much but differing in emphasis. It ends up feeling like a discussion.

My recommendation to just pick up any classic German film that MoC releases remains consistent – you will get an astounding transfer, and supplements that present informed, dynamic perspectives on, as breathlessly excited and engaged as if the films came out only yesterday. Never mind just a hell of a thrilling film.

Written By
Scott Nye
More from Scott Nye
Scott pulls out the map to catch the killer at No. 21!
Read More