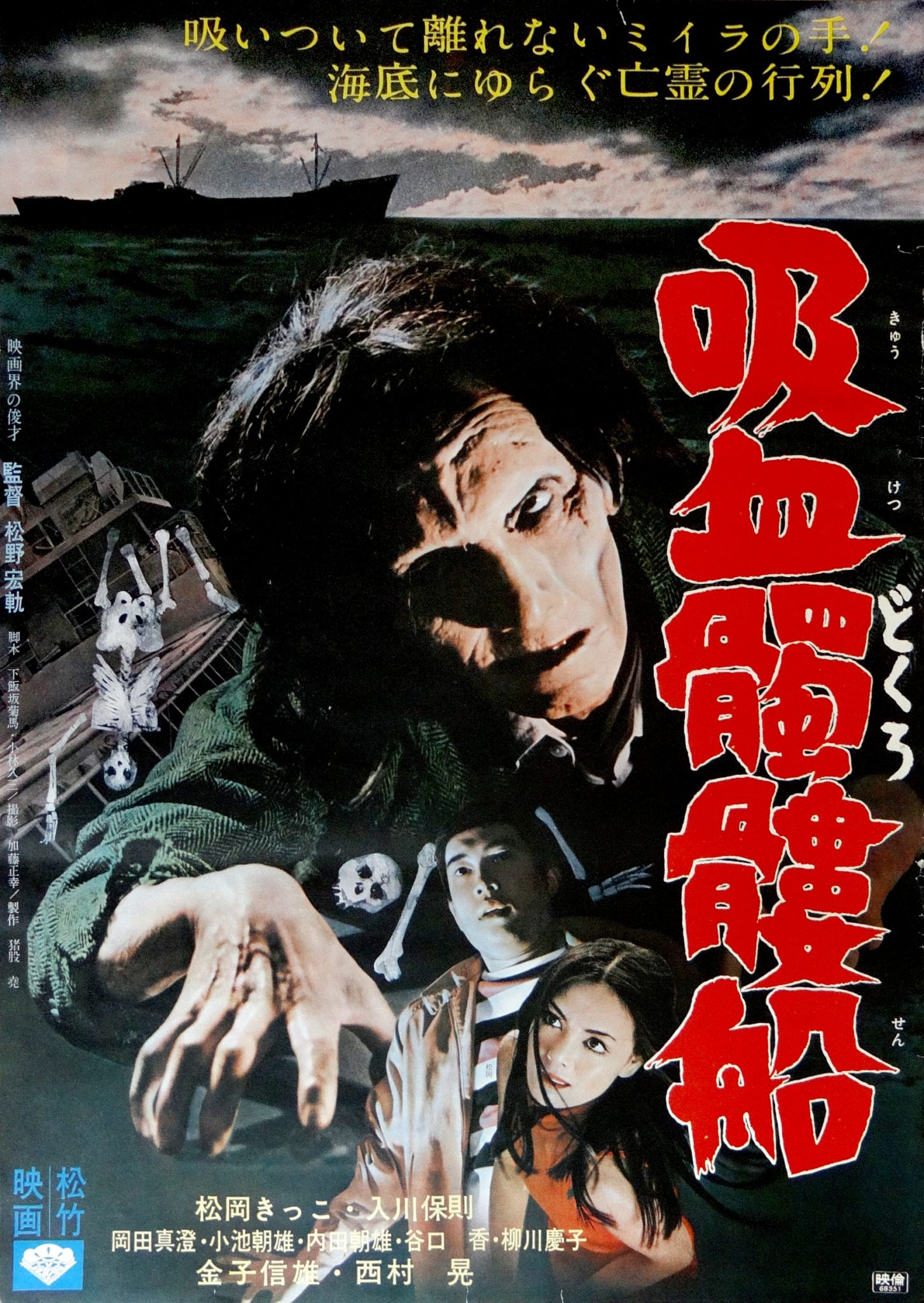 The Living Skeleton is an enjoyably eerie tale of ghostly revenge, a film that mainly exists to generate the sense of weirdness that affects viewers who allow themselves to get caught up in a creepy tale of inevitable doom without necessarily thinking too much about its central premise. Through a combination of gloomy atmospheric elements, the dissociative dead-eye gaze of a strikingly beautiful female protagonist and bizarre, occasionally arbitrary plot twists, we lurch from amusement at the cheesy sentiments and visual effects to a more disturbing contemplation of the human capacity for cruelty and deception. I can recommend it without reservation to anyone who might feel intrigued to take in a swiftly moving 80 minute excursion featuring seductive monochromatic widescreen compositions, the allure of the “ghost ship” narrative archetype and a fun variation on that whole Japanese realm of twisted semi-disembodied spirits tormenting ordinary mortals with their cackling laughter and implacable intrusion into our everyday lives.

Actually, I have a hard time placing this film in any particular year. It’s existence as a black and white film does indeed place it within the decade of its creation, but except for one very brief flash of nudity, it could have just as easily been made in the early 1960s or even late 1950s. And I suppose it might have been made even later than 1968, in terms of pure content. The Living Skeleton doesn’t appear to have much concern for any particular cultural issues of its time. And that’s perfectly fine with me. But the trailer embedded below does present the film as something new, daring and even innovative. I suppose that it could have felt like some kind of breakthrough at the time, perhaps most pointedly in its insertion of explicitly Christian symbolism. That theme serve as a connection point with other Japanese films of its era such as Black Sun and Gate of Flesh that also incorporate aspects of Western spirituality into their stories.

The Living Skeleton‘s premise is starkly presented from the very first scenes: a freighter ship is hijacked by pirates, who cruelly gun down the crew and passengers in order to steal a treasure of gold that’s being transported. We’re given close-ups of the gang leader and his henchmen as they go about their foul business of slaughtering those onboard the ship.  And just to make sure we know who is who, we get flashbacks later on in the film that help us to identify each of those gunners as they reappear to meet the wretched retribution that their crimes have earned. They exist only as ciphers, as heartless assassins who blindly follow their boss’s order to kill without hesitation. In the process of being led into their own slaughter, we pick up on various character attributes that were initially hidden from us: their alcoholism, their cowardice, their greedy venality, and so on. It’s an easy set-up. We’re led to despise these characters, so that we can more readily cheer on the destruction they so obviously and immediately deserve.  Each killer’s demise serves as its own mini-episode, until we finally arrive at the final revealing showdown between the vicious crimelord and the resolute victims who tenaciously inist upon fulfilling their vengeful mandate. As their demand for justice is satisfied, so is ours, even though the final resolution forbids us from enjoying much of what the outcome has in store. The cruel separation of lovers cut down in their prime, before they could enjoy the full fruits of lifelong relationships, is maintained. Some crimes can never be fully compensated or restored.

I offered comments on The Living Skeleton a little over two years ago as part of an episode on The Eclipse Viewer podcast that I record with Trevor Berrett. In that program, we discussed Eclipse Series 37: When Horror Came to Shochiku, a collection of four scary movies released ijn 1968 by that legendary fixture of the Japanese studio system. (My next review in this space will also draw from that same set.) I just gave the pod a fresh listen, and my overall impressions of the film haven’t changed all that much. My thoughts in that conversation provide a better plot synopsis than what I offered above, and my overall take from November 2014 is a bit more critical than I’m feeling about The Living Skeleton at the moment. This time around, I enjoyed the rewatch as an agreeable diversion into the macabre that doesn’t require much in the way of heavy intellectual lifting. I enjoy this sort of thing every so often, especially these days in the context of so many hefty and distressing things going on in the world around us.