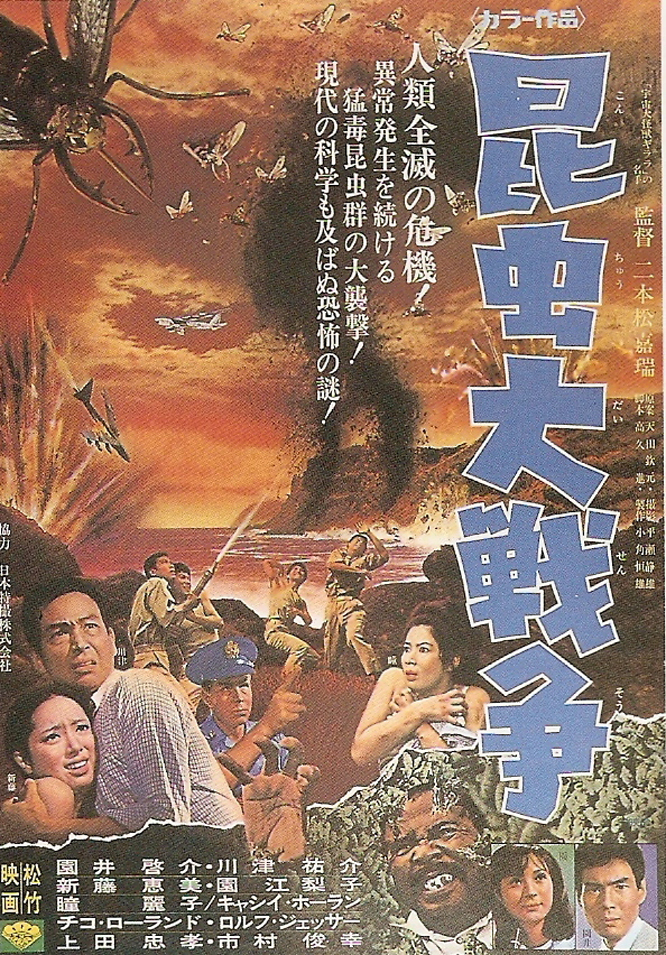 Genocide is the fourth and final title included in Eclipse Series 37: When Horror Came to Shochiku, a box set containing the sum total of a short lived experiment that the fabled Japanese studio conducted in the late 1960s. For a movie that doesn’t feature any giant monsters stomping on buildings or blasting victims with exploding laser beams, it otherwise manages to tick off just about every other item associated with Japanese post-apocalyptic sci-fi horror disaster cliches of its era:

Based on the above description, most viewers can probably surmise for themselves whether or not Genocide is the kind of film that hits the mark based on their mood at the moment, or if it will even suit their tastes at all, without me having to give much guidance either way. This is the kind of movie that some folks can’t get enough of, while others will find it a complete waste of time. Myself, I vacillate between the extremes.

Unlike its companion film The Living Skeleton, both of which were released on the same day, November 9, 1968 (though I can’t say for a fact if they were part of a double feature), Genocide feels very much as if it was tuned into the zeitgeist of its moment. I can readily set it up alongside vastly superior films like 2001: A Space Odyssey and Planet of the Apes as contemporary ruminations on what the future might hold in store for the human race, from the perspective of that particularly turbulent era. In its overt pessimism about our ultimate trajectory, Genocide also shows itself to be cut from the same cloth as Goke, Body Snatcher from Hell which ends on an even bleaker note, with the entire planet reduced to a barren wasteland, surrounded by a flotilla of death-dealing spacecraft poised to annihilate the last of the straggling survivors. In this film, there is a slim beacon of hope that the doom that we all apparently deserve might be evaded at least on a very local level, if only the pregnant woman can find a shelter from the swarms of lethal insects now commissioned to take out their long pent-up revenge on the species that has been slaughtering their kin without a second thought for lo, these many millennia.

Genocide also spices up its presentation with some timely bits of socio-political commentary, featuring critical riffs on the continuing impact that the American armed forces were having on the lives of Asians in Japan and the wider western Pacific region. Air Force bombers carrying nuclear weapons are the source of the central conflict, and if nothing else, the military commanders in charge of those maneuvers get a really stern talking to in the film’s concluding scenes, which I can only suppose had a similarly cathartic effect as what jingoistic American audiences felt when they enjoyed the Rambo series.

And let’s not allow Genocide‘s indulgence in a few sequences of vintage psychedelia pass by without mention. The scenes of courageous scientist Nagumo’s mind-meld with the angry bugs, as he seeks to discern what madness drives their homicidal frenzy, has the requisite sensory-addling effect that one would hope for in such a scene: a burst of burbling blobs in clashing cataclysmic colors, pulsating and throbbing with a menacing insectoid intensity, guaranteed to instigate a bum trip in most any overly sensitive psychonaut, if not for the regrettable brevity of those sequences. I could only with for another ten minutes or so of that sort of thing.

You can listen to me talk about this film a couple years ago on this episode of The Eclipse Viewer, for starters. Having just watched it again this afternoon, I will dedicate most of my comments here to the contributions of Cathy Horan and Chico Roland, two American actors who appear to have found a niche in Japanese cinema of the mid-1960s. Horan’s career was pretty brief, ending in 1969, so it could very well be the case that this film, where she played an important, if not quite leading role, was the apex of her creative work. She’s initially introduced as a sex kitten caught up in an affair with one of the Japanese male leads, the roustabout tough guy Joji, who also has a girlfriend of his own nationality that he’s juggling between rendezvous. Horan could pass as a convincing stand-in for Ann Margaret, at least if she wasn’t required to sing, or dance, or really even act all that much. As the film goes on, her character becomes more complicated, shall we say, with a final reveal that I won’t spoil here (though I did in the podcast, be forewarned) but which struck me as both highly comical and egregiously, cheaply offensive. Maybe it’s just me, but I do get a kick out of imagining the personal and professional path that led her to relocate from wherever she began her life to take on the kind of roles that she landed in here, as well as her other appearance in this Eclipse box as a similarly voluptuous and distracting “foreign scientist” in The X from Outer Space.

Chico Roland, a.k.a. Chico Laurent, is another marginally talented performer for whom I have developed a real soft spot. Not sure why exactly, since his acting technique is actually rather terrible. But I just like the guy, and the more I see of him on screen, the deeper my fondness grows. Here, he plays Charly, a member of the bomber crew who’s called upon to freak out every so often in his own inimitable manner, in post-traumatic flashback scenes and as a victim of horrific insect infestations. I spoke at some length about Chico in our podcast on The Warped World of Koreyoshi Kurahara, so I’ll offer that link here if you’re inclined to follow up on it. His performance here serves as a capsule summary of what makes Genocide as awful and as charming as just about any viewer is likely to find it, either way. If you cut him (and the creative forces behind the film) a bit of slack, then you can feel free yuk it up at the crazy bonkers spectacle placed before us. Likewise, one can simply point to his heavy-handed ham bone antics as an easy proof of dismissal from any obligation to take this film seriously, even for a minute. Whatever side you come down on, I hear ya. There’s really no defending Chico Roland’s legacy as far as aesthetics or thespian talent is concerned. But at the same time, he threw his heart, soul and body into his performances. That much, I cannot deny. And I appreciate his full throttle approach to his craft. He left a memorable impression in every film appearance I’ve seen. I’m happy to consider myself a fan.

Overall, I enjoyed my dalliance with Genocide, though I’m pretty sure that I’ve satisfied my curiosity for more than a few years from any need to revisit this film or the Shochiku Horror phase in general. It was an odd and intriguing cul-de-sac of cinematic exploration for them, and for me. But now I’m happy to move on to deeper, richer veins. 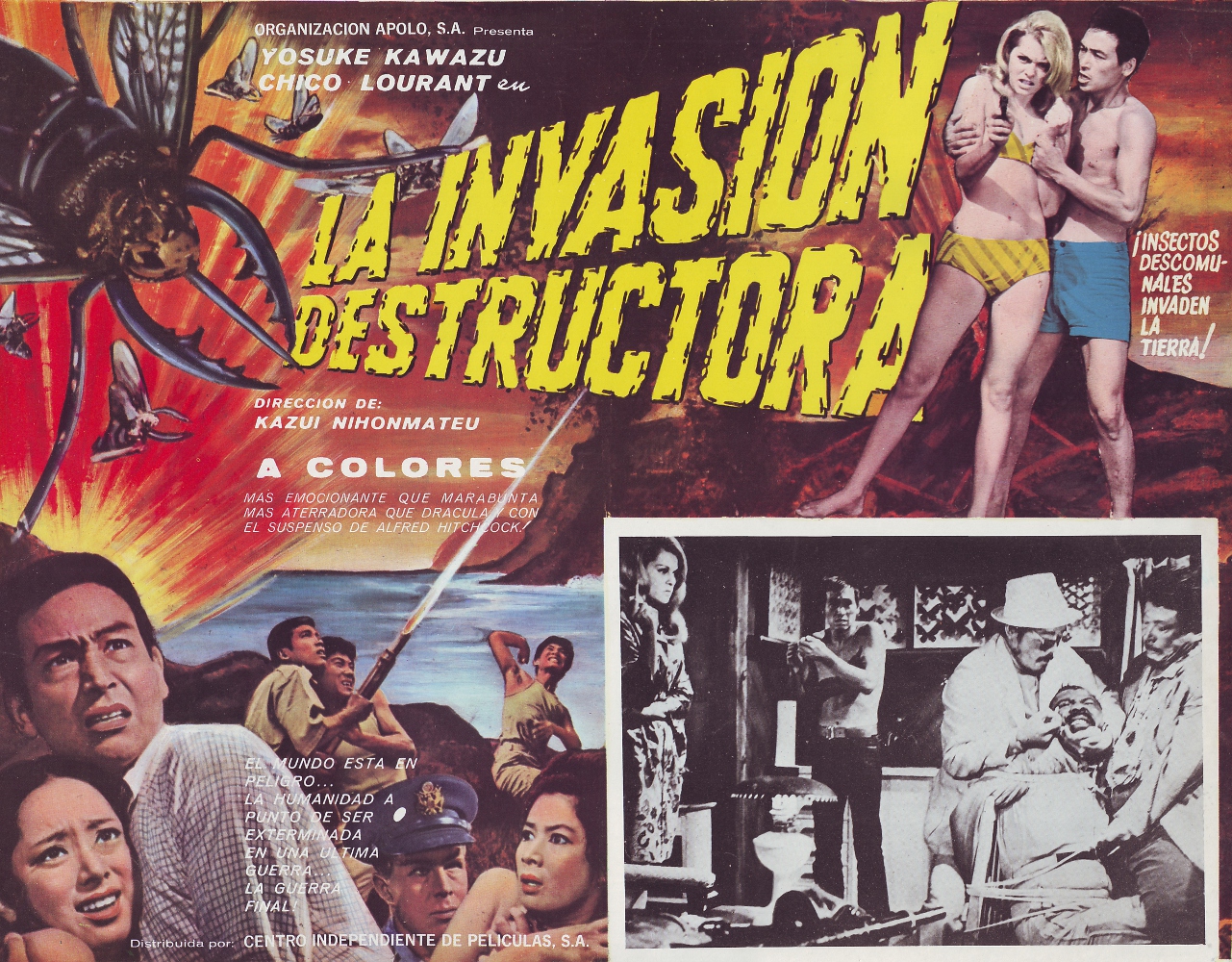 Next: Spirits of the Dead